When I got done writing yesterday’s post, I didn’t think it was possible to have another epic day.  But that’s just what happened today.  It all started last night when I saw a posting on MOU-Net that a Lazuli Bunting had been spotted at someone’s feeders in Hutchinson.  This is a gorgeous blue and rust-colored bird that resides in the western part of the country.  It is a rare stray to Minnesota.  One had showed up a couple weeks ago in the Cities, and I was tempted to chase that one.  However, I figured that we’d see one someday when we took a road trip out west.  The Cities is a two-hour trip, and the sighting was during the work week.  It just wouldn’t have worked.  Hutchinson was only a 45-minute trip, though, and it was the weekend.  Pete, the person who posted the sighting of the Hutch bird, said he’d provide updates the next day if it was still there. Melissa and I decided that this was another bird worth chasing.

This morning around 8:00 I saw a posting that said it was back at 7:30!  While we were tempted to skip church and chase this bird, we decided to wait until after church.  I was fairly calm and confident that since the bird showed this morning that it would probably be around periodically throughout the day.  In the meantime, though, I watched out our windows.  The oriole activity has been nuts.  A couple of them looked a little different.  It turns out we had female and first-year male Orchard Orioles at the feeder!  A life bird!  I was hoping we’d get to see the mature male to clinch this one, but for now this guy will do. 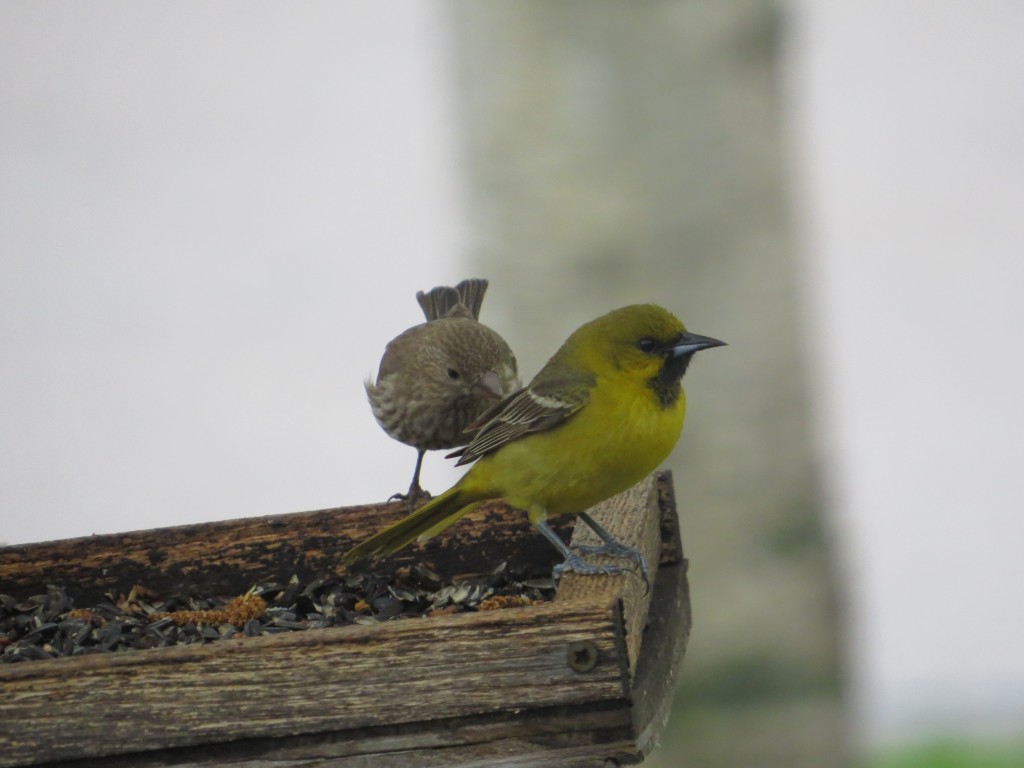 As I watched our yard birds, I was pleasantly surprised to see a lifer from yesterday make an appearance and partake of our oranges – the Tennessee Warbler.  This was a real treat because we have not really had any warbler activity in our yard. 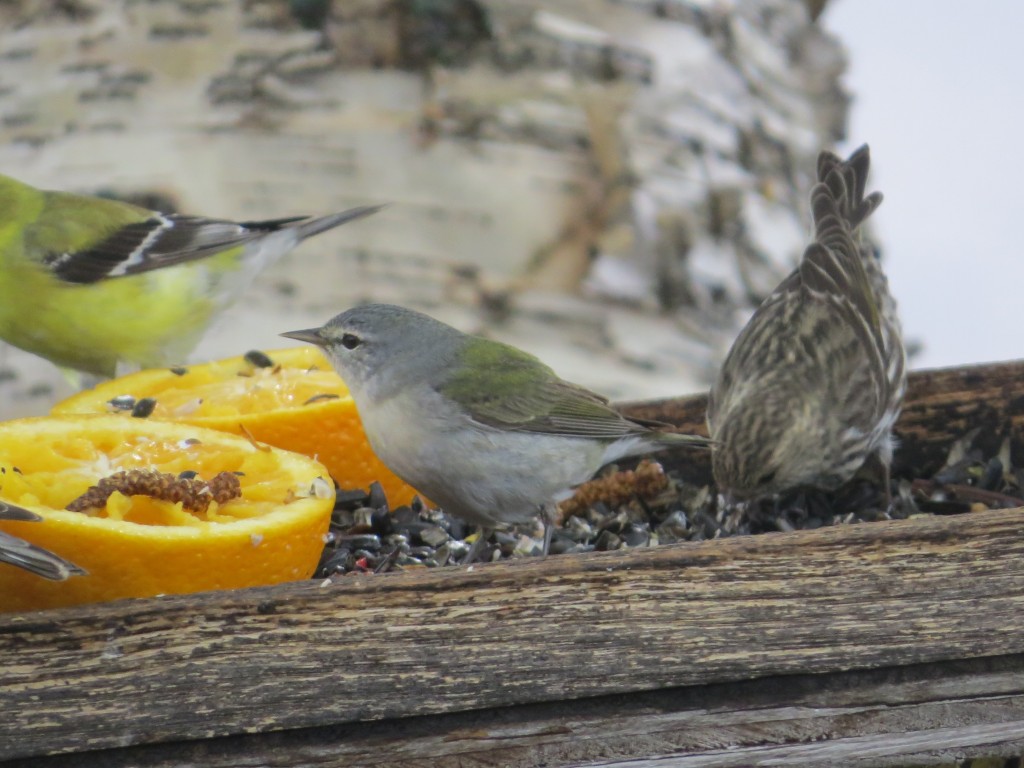 One of the birds that amused me this morning was a House Sparrow who thinks he’s a finch.  This sparrow has learned to cling to the finch feeder, even hanging upside-down. House Finches don’t get any love in the birding community or general population, so I went to grab my camera to show this guy off.  As I walked to the window, I looked out and froze.  This is who I saw. 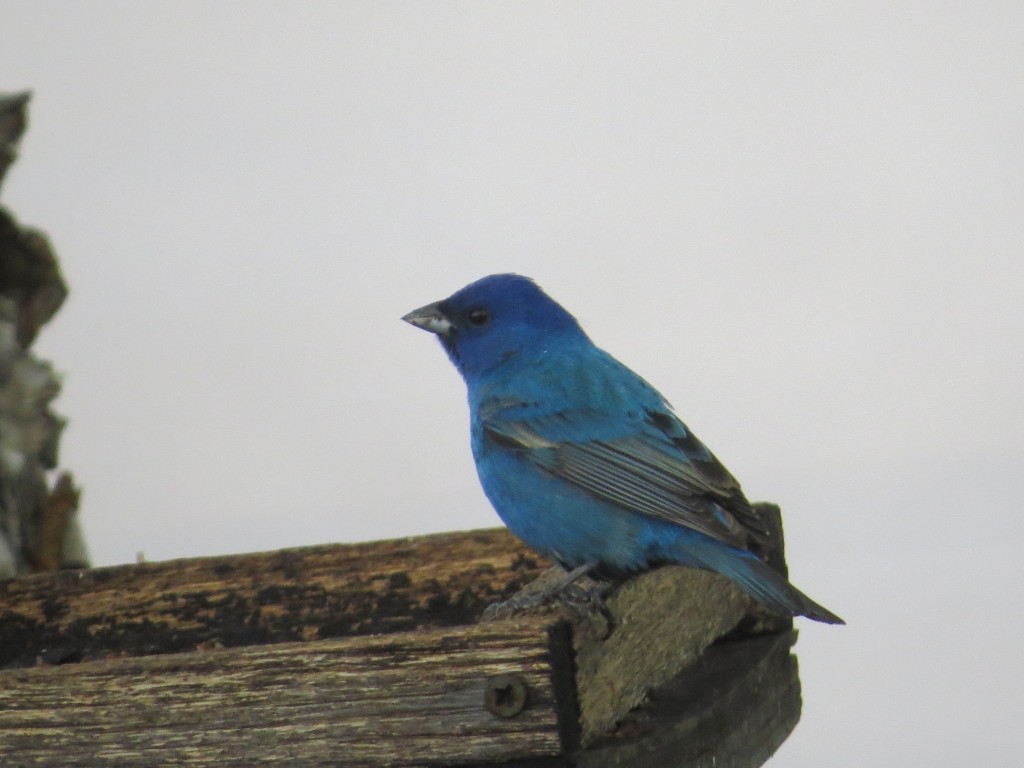 The Indigo Bunting!!  Not only was this a life bird, but it was a major target bird for the summer of 2013!  I couldn’t believe it – the male Scarlet Tanager and now this guy in less than 24 hours in our yard!  I snapped a quick picture and then calmly said, “Evan, walk – don’t run; we have the Indigo Bunting.”  Everybody came out for this one.  Even non-birding Melissa knew of this bird and had to see it.  She even asked to see my pics on the LCD right away.

It was just a general buffet of color around our yard this morning.  The American Goldfinches and Baltimore Orioles are thick lately.  Here I caught one of each in the same shot. 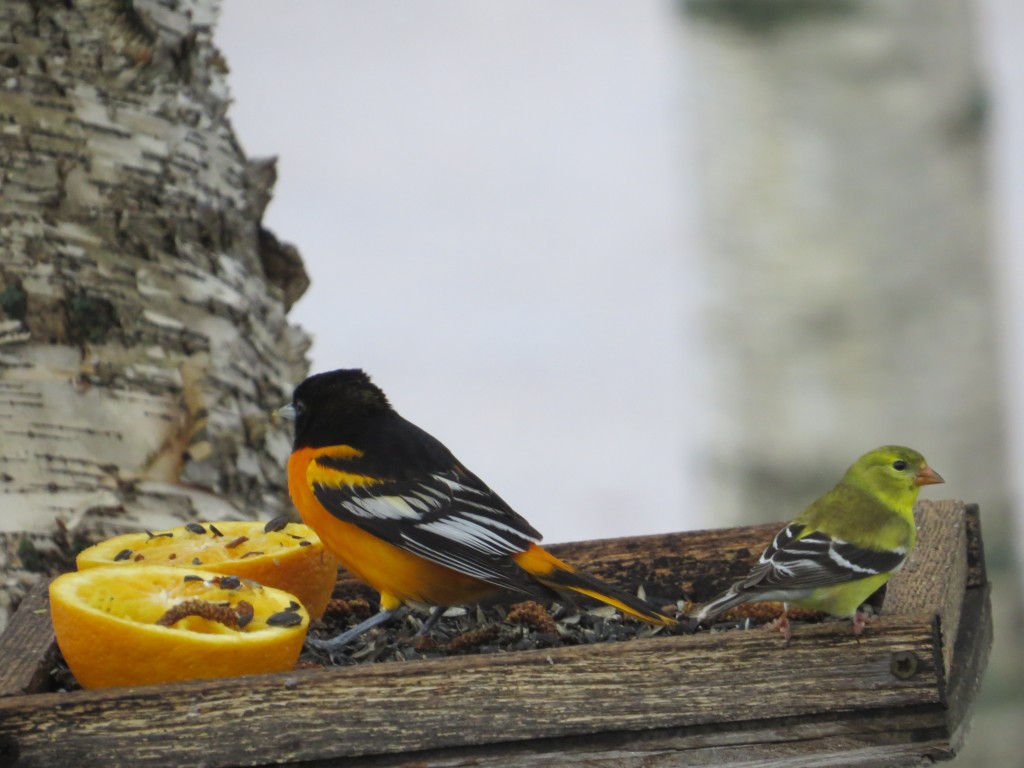 We finally went to church, and I tried to not think about what emails were waiting in my pocket.  Once we got to the car after church, I checked for updates on the Lazuli.  Nothing new.  Oh boy.  So I called Pete.  He said it was showing well until about 10:00.  Then it was absent until about noon when it only appeared for a minute or two.  That was enough information to make this mission a go.

We stopped and ate some lunch in Willmar before heading southeast to Hutch.  Once there we had to make a potty-stop for Marin.  This potty-training business is really starting to handicap our birding. Minutes felt like hours.

We finally made it to the house which we found with no problem.  When you chase a rare bird, you don’t really have to know the exact address.  Just look for the small flock of people with binoculars.  We quickly hustled across the street to join them – three sets of binoculars pointed up looked promising. 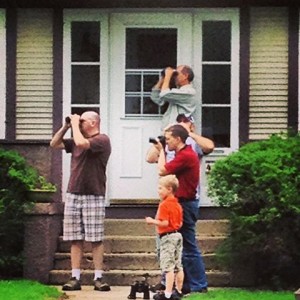 It turns out these two fellows (the homeowner is nearest the door) from Lonsdale had been watching the feeders from inside the house but had not had any luck.  They were watching warblers out front when we arrived.  The one they were currently viewing was a big target for me and a life bird for both of us – the Cape-May Warbler. 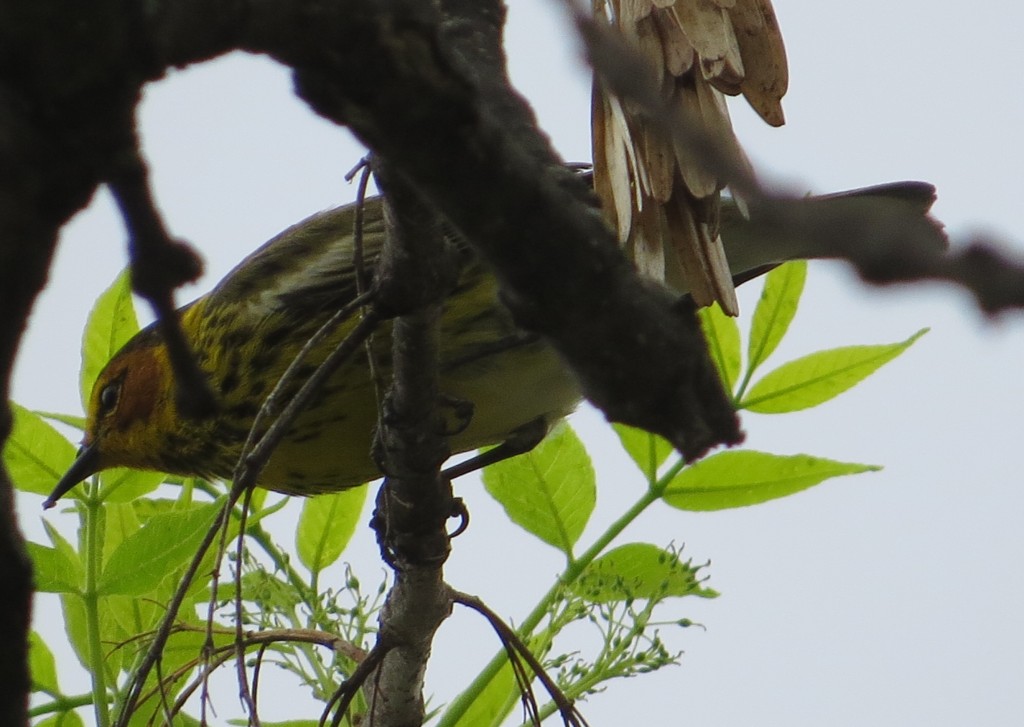 It was such a fantastic bird.  Here’s another shot to show it off some more. 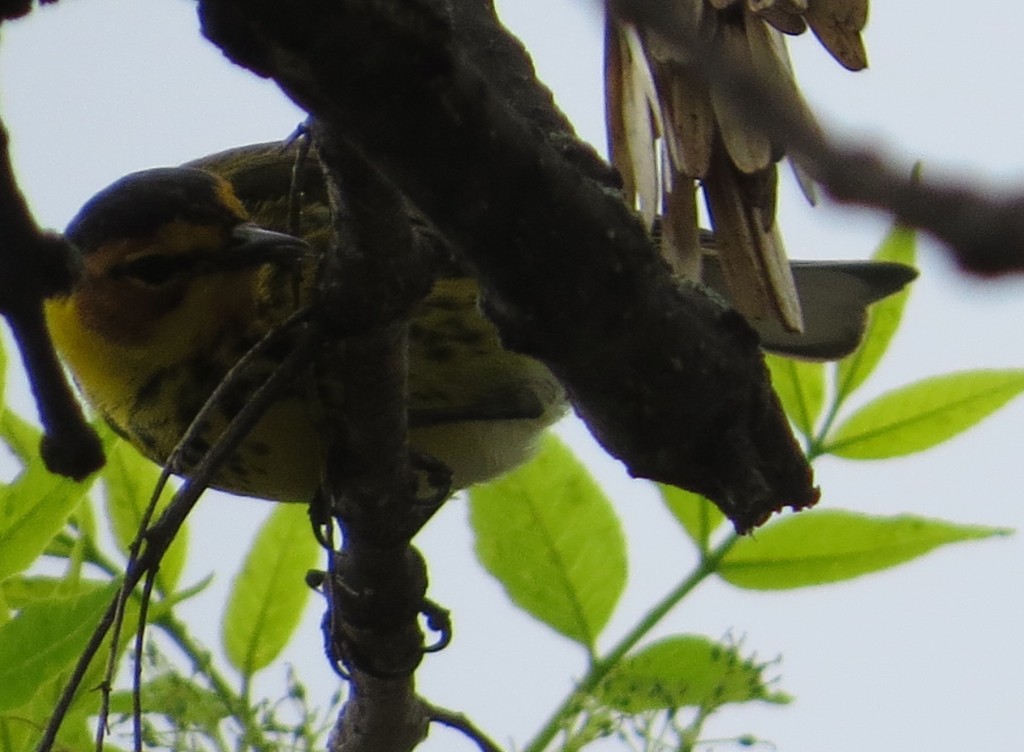 The two gentlemen decided to walk around the block looking for the Lazuli Bunting.  Pete invited Evan and I to come inside to watch for it from the best vantage point, his dining-room window.  Pete was a gracious host who watched with us and visited about birding and teaching.  Undoubtedly he’s had several strangers stop by during the day and welcomed them.  I love how birders are a friendly bunch who help each other out and want others to share in the joy of a cool bird.

We watched and watched.  It was dead.  Not a single bird of any sort was showing. After nearly twenty minutes, the activity finally started to pick up.  A goldfinch here, a few Pine Siskins there, and some squirrels gave us something to look at.  The best bird to hold our attention while we waited was the Ovenbird.  We got to see his beautifully striped head as we looked down at him while he bobbed alongside the house in the flower garden going from hosta to hosta.  Pete went about his business while we watched and fielded calls from other birders. We had been there for nearly 45 minutes when it happened.

“Dad, I just saw the Lazuli fly into that tree!”  I didn’t see anything, but I’ve learned to trust my son when it comes to birds.  I looked at the bird to which he was pointing and quickly pulled up the binoculars.  It was, in fact, the Lazuli!!!  I snapped off a few quick pictures.  The quality isn’t the best since I was shooting through glass at an angle and was fighting with a camera that wanted to focus on leaves.  I got one decent shot which at least shows off how magnificent this bird is. 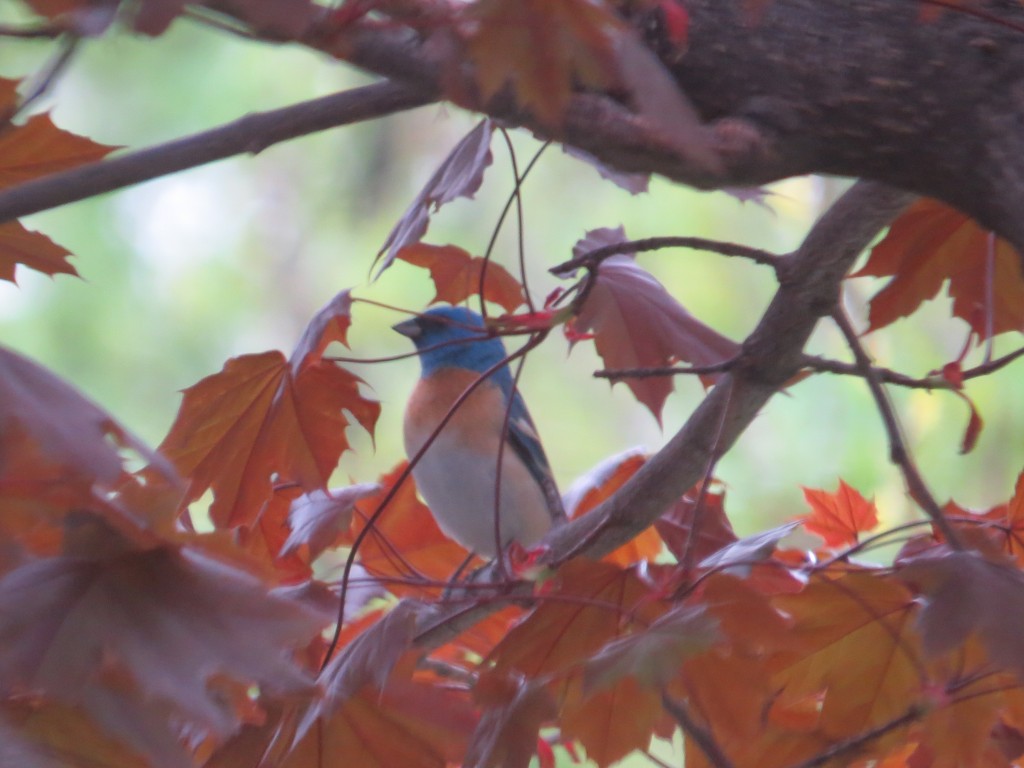 While we were watching, I heard Pete on the phone with another birder say, “Hold on, I have a sharp-eyed six-year old who just found it.” I didn’t have much of an opportunity to photograph it as it flew away moments later.  It was not on the ground feeding where it had been seen all morning and last night.  Without Evan, we probably would have missed it.

Minutes later, the Lonsdale birders came into the house.  One of them had seen it from standing outside.  They watched for awhile and then decided to canvass the block again. We waited for Pete to finish up his phone conversation so we could thank him and say good-bye.  It was a Minnesota birders good-bye as we had to show each other pictures of the bunting and pictures of leucistic birds we’d each seen.  Then as he walked us out, he pointed out another life bird that was flying high, the Chimney Swift, and told us how they live in his chimney.

It was finally time to drive again.  I called up my cousin Brett who lives in town to see if we could drop by for a visit.  We had a fun time with them and got to watch our daughter be a show-off with all her dance “moves.”  But the birding was far from done for the day, so it was time to go.

Our next stop was a home about 5 miles southwest of Hutch where a Great-tailed Grackle had been consistently seen in someone’s yard for a couple weeks.  This is another bird that is north of its normal range.  Pete had made the report on this bird too and told us that the homeowners were fine with people parking in their driveway and walking around their yard.  So we did just that.  Unfortunately we were not able to come up with the grackle.  Maybe we’ll see it in two weeks when we have to head back to Hutch for my cousin’s daughter’s graduation party.

We were homeward bound now and flying high on birding adrenaline.  At least two of us were anyway.  As we got close to our house, Melissa was on the phone with her mother telling about all the phenomenal birding today.  I was impressed that Melissa not only knew how many lifers we got today, but that she also knew their names.  Just as we approached the one-mile mark from our house, I spotted an LBB that was a candidate for a life bird.  I whipped the van around and drove back.  We found it again with no problem.  Sure enough, it was a life bird – the Vesper Sparrow. 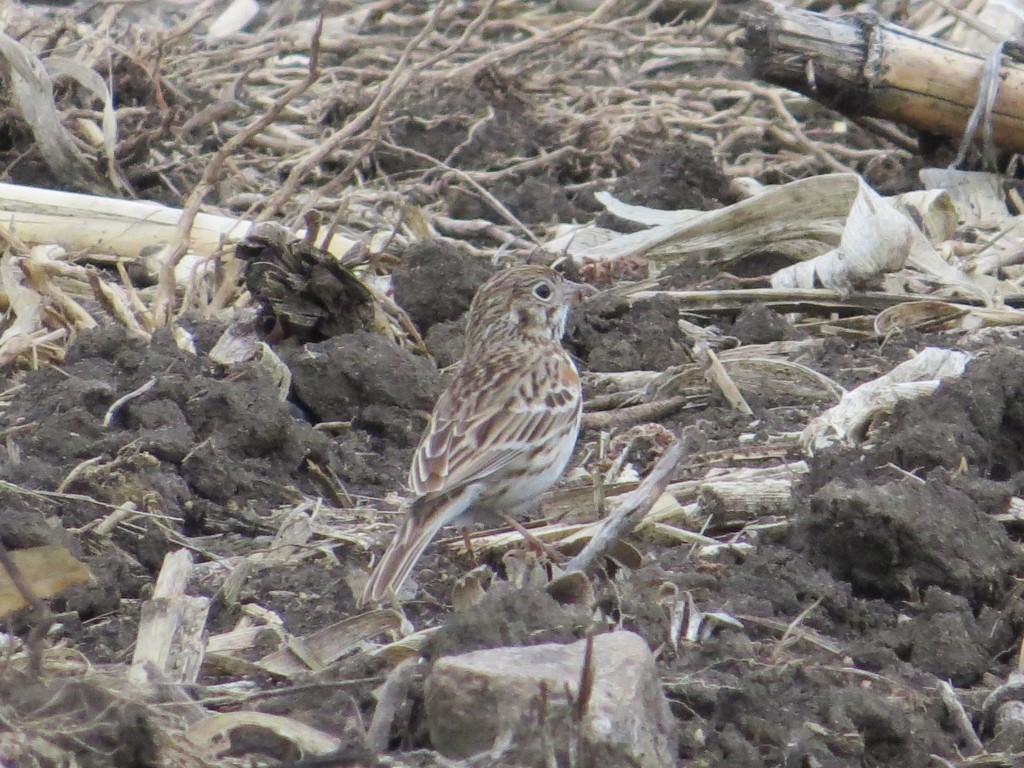 We are now 2 for 3 on our chasing trips.  Six lifers today – and some real lookers at that.  Today was a birding day that we won’t forget. It was even more special that we got to enjoy it as a family.  Meeting nice new people and visiting with family was an added bonus.  Oh, and that finch-like House Sparrow?  Here he is. 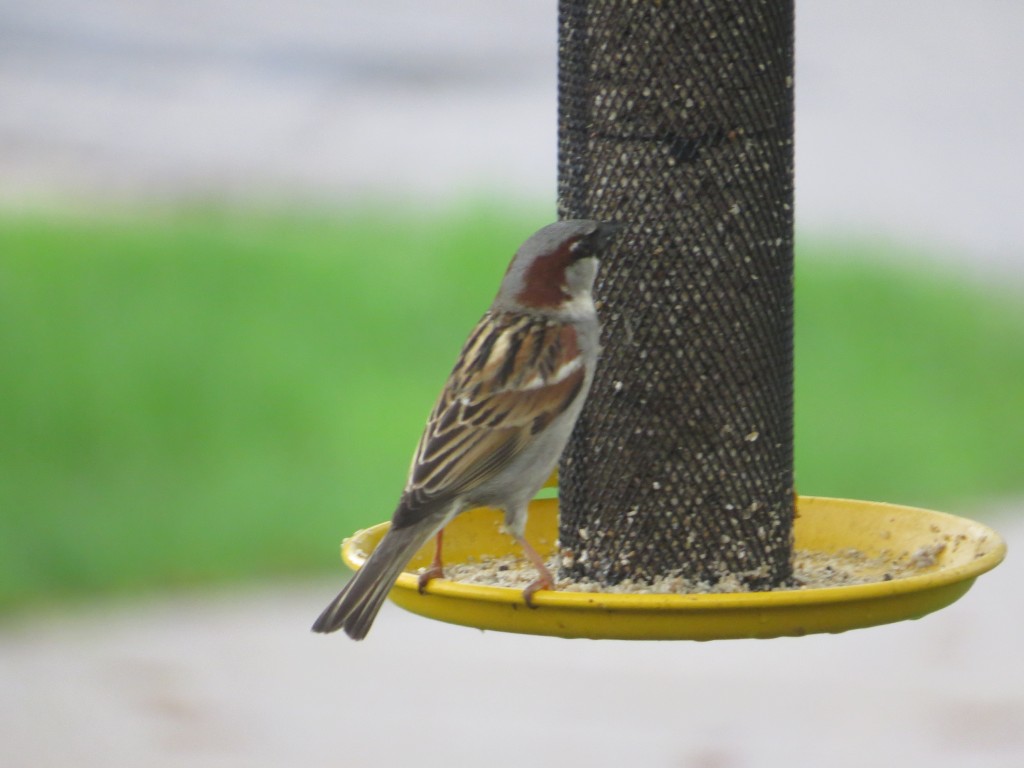