Toward the end of this week I saw a post on MOU-Net in all caps that made my eyes bulge: PAINTED BUNTING IN AITKIN COUNTY.  If you don’t know what a Painted Bunting looks like, take a break from reading this post and do a Google Image Search for one. You will swear this is a bird that you’d find in a pet store.  The truth is, though, that this bird is a summer resident of our southernmost states.  This particular bunting got blown way off course.  I’ve always wanted to see one, but it was still impractical to escape to Aitkin which is two-and-a-half hours away.  Compounding matters was that I was home sick and wasn’t even feeling up to taking care of my own kids.

Before I dozed off into a 4-hour coma on Friday, I briefly entertained the idea of going up to Aitkin in the evening.  Naaahh.  It just couldn’t happen.  I was sick.  There wasn’t time.  But a Painted Bunting in Aitkin.  I started to think how nice it would be to not have to wait years and to not have to travel to a place like Louisiana or Texas in the sultry summer just to hope to see one.  The one in Aitkin had been a regular visitor for three days – consistency, predictability, high probability.  But I had Mother’s Day to plan for once I did feel well.  Case closed.

Melissa got home later that day and had been aware of this bunting. She and her birding expert co-worker, Randy, often find themselves visiting about my birding exploits. Melissa reported back to me that Randy said if he were me at my stage in this birding hobby, he’d be going to Aitkin via Duluth.  That’s a very circuitous route of travel, but 355 Red-throated Loons had been spotted right by Canal Park close to shore!  The previous state record was 39 Red-throated Loons all-together.  Randy got his lifer when it was a long ways away from shore.  Anyway, my mind was really spinning now.  I think Melissa was even convinced this was a very rare opportunity.  Even she has remarked on the bird’s beauty.  Forty-five minutes later with Kleenex in hand and dogs loaded, we were headed to Brainerd.  We didn’t have plans to go to Duluth, but we were going to try for this bunting.

We got to Brainerd around 7:30.  It got dark around 8:30, and Aitkin was only a half hour away.  Do we try right away tonight?  We decided against it because it would be a lot of added time in the car, and birds typically don’t feed near dark.  It would have to wait.

Anytime you go on an adventure like this, you have to be prepared for the possibility of not seeing the target.  Mentally I have to try to find a way to make sure it is win-win.  My win-win for this trip was that the kids were getting a fun, unexpected trip to a hotel. Though thoughts of “Would we? Wouldn’t we?” crept into my mind, I did my best to shove them aside and focus on enjoying swimming with my kids and visiting Mills Fleet Farm.  We all had the wow factor for the latter.  The former was surprisingly enjoyable too as the pool was as warm and huge.

Saturday morning got off to a slow start.  I woke up to a blustery, snowy morning and dog poop in the car.  Bad omens all around.  I cleaned that up and chatted with some (ice) fishermen in the parking lot while my family slept.  After they woke, we swam, ate breakfast, and packed up.  This had to be a fun experience for everybody, especially if we didn’t get the bird, so I did my best to move slow and just enjoy being with the people I love.   I tried to relax, thinking that if the bird was there, it would be there all day.

At 10:30, we were finally en route to Aitkin.  We had a cool birding moment along the way – we all all witnessed an Osprey fly low right over the car carrying a bluegill in in its talons.  By 11:00, we were finally on-site in someone’s yard in rural Aitkin.  There were three other cars of birders there from the cities of Winona, Faribault, and Hastings.  We weren’t the only twitchers today.  It was too cold to stand and watch, so Evan stayed in the car while I watched with the other birders for a little bit before escaping back to the car.  I was not dressed appropriately for this latest winter weather. That’s me on the left. 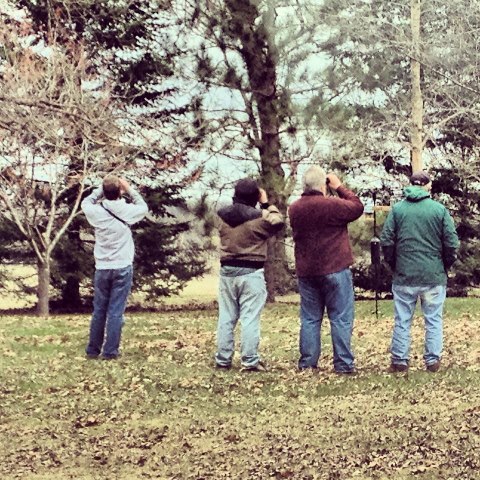 I quickly tried to get a handle on the situation.  I asked them how long they’d been there. They replied they arrived five minutes ago.  That meant there was a chance.  Then I found out one woman had been there since 9 AM and not seen it yet.  Oy.  As I chatted, I could tell I was with some serious birders.  They were analyzing every sound and sight. Birds would come in, binoculars would go up.  One guy said in response to a bird sound, “That sounds more like the Warbling Vireo to me.”  Later on, another said, “I keep trying to turn these cowbirds into Brewer’s Blackbirds, or better yet, a Rusty Blackbird.”  Smiles and light chuckles could be heard from the others.  Then one of the guys said something that caught my attention: “Yeah, this is nothing more than a workshop on Purple Finch identification.”

“There are Purple Finches here?” I replied.

“Yeah, there’s a couple right up there,” he said as he pointed to the top of a tree. Awesome – a life bird.  All winter long we’d been trying to turn House Finches into Purple Finches.  They look extremely similar.  I went back to the car to get Evan, so he could see them.  We got several good looks as we sat and waited.  Here is a shot of a group of females.  They have that white stripe above their eye which distinguishes them from the plainer female House Finch.

Here is the male.  He differs from his House Finch counterpart by lacking the brown streaking on the sides.  The Purple Finch male also has a solid colored head where the House Finch has a contrasting brownish cap. 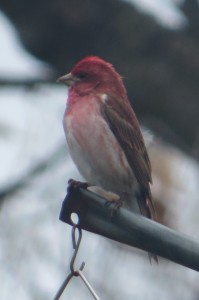 It was fun to get this life bird.  I thought we’d have to wait until next winter as it is a northern bird.  Today this bird ended up being our silver lining.

One by one, the other birders eventually left.  Even the lady who’d been there since 9:00 called it off.  We hung on for awhile.  We moved our vehicle to the number one viewing spot which was important on this cold day.  We couldn’t handle being outside for more than a few minutes.  While we waited, the Yellow-rumped Warbler dropped into the tree next to us.  Finally!  I tried to take some pictures, but it wouldn’t hold still long.  I managed to get one recognizable photo. 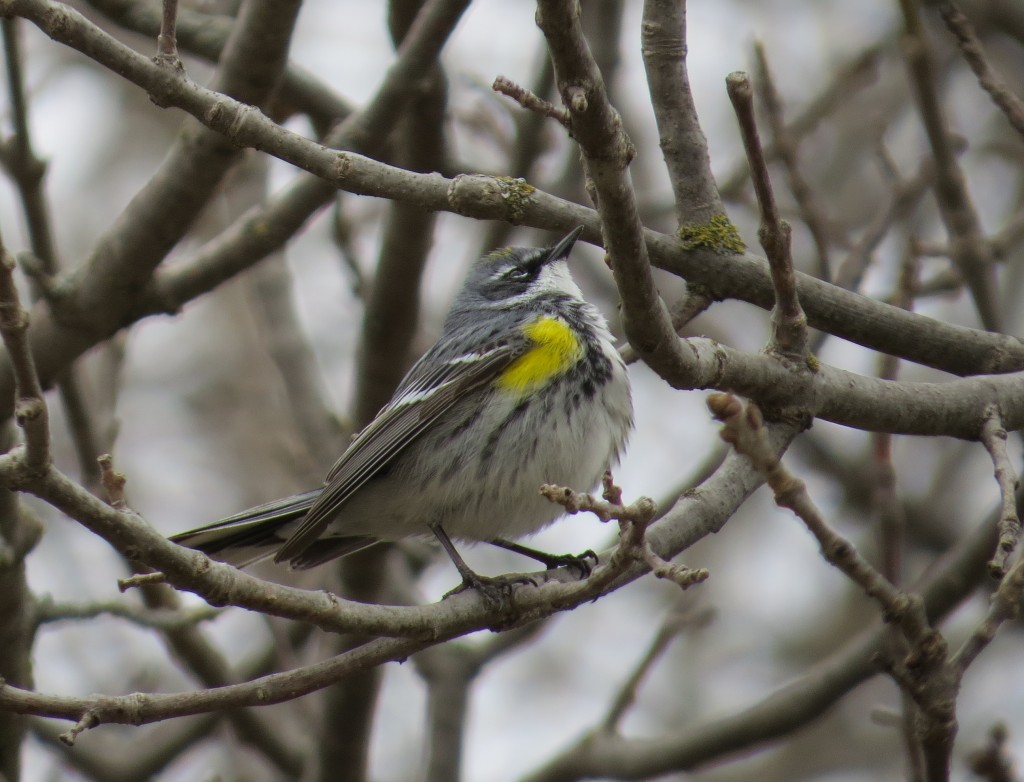 After an hour-and-a-half of watching these kind strangers’ bird feeders, we called it off. I’m sure this weather convinced this tropical bunting that he was lost.  It just wasn’t to be. That’s okay.  We had a good time as a family, got a life bird, and photographed a nemesis bird.  The hunt lives on and will only make success that much more thrilling when we find it.

As a consolation to our defeat, we were treated to our FOY (First of Year) Baltimore Oriole at our own feeders tonight.  Chance favors the prepared – set out some oranges and grape jelly in a dish if you want to see one. 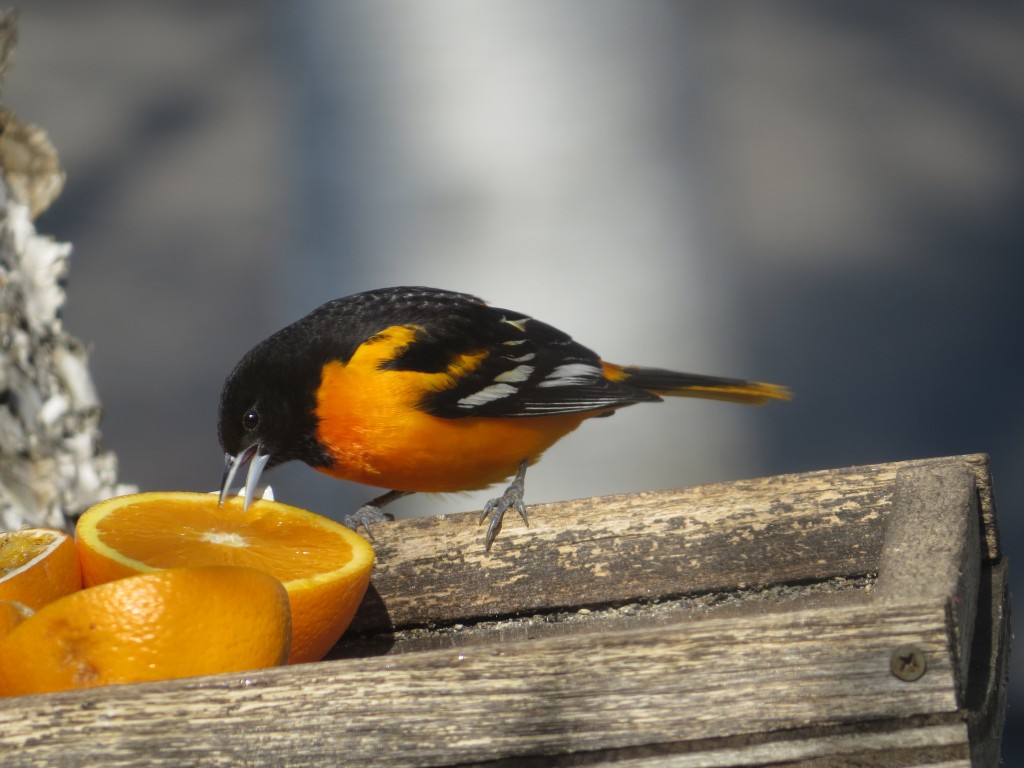 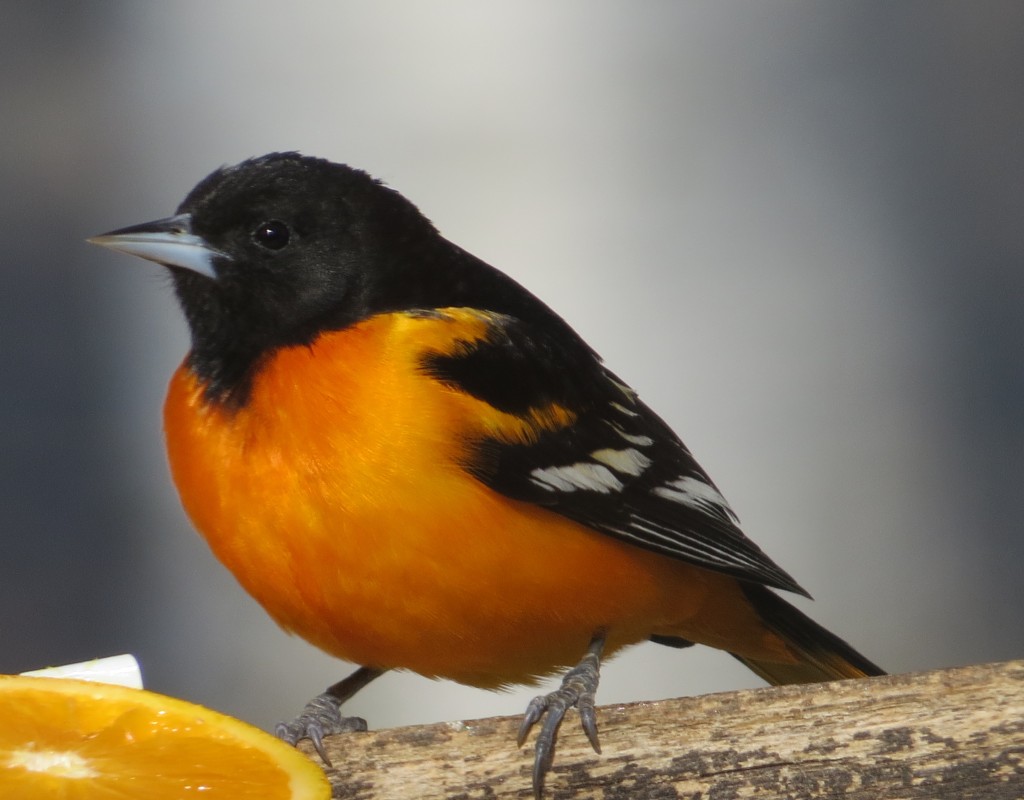 2 thoughts on “Hunting for a Bunting”