On Friday Melissa and I made the decision to cure our cabin fever by taking a day trip to the Twin Cities on Saturday.  We had errands to run, family to visit, and birds to chase.  Since I follow the Minnesota Ornithologists’ Union on Facebook, I had learned of a pair of Peregrine Falcons that were nesting on the High Bridge in St. Paul.  I had also started following Twin Cities Metro Osprey Watch and had been corresponding with the person in charge of that, Vanessa Greene, about locations of nesting platforms and returning Osprey to the Cities. 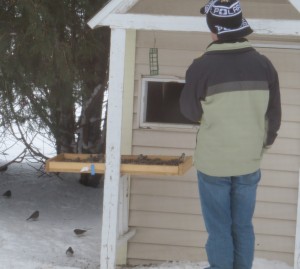 Despite our busy day ahead, we had a somewhat leisurely morning and slept in a little. When I did my dog chores I noticed that the Common Redpolls weren’t too scared of me when I’d pass within a few feet of the feeder.  I had a little time to kill, so I thought this would be the perfect time to try hand-feeding these birds – something I’ve seen online.  I grabbed some seed off the feeder and rested my open hand on the base of the feeder while I looked down and remained motionless.  Within seconds the redpolls were buzzing around me and started landing on the feeder again.  Then it happened.  One landed on my shoulder!  After it left I went in the house to get Melissa to take these pictures.  When I went back out I put bird food on my hat, shoulders, and open hand.  Nothing was coming.  I didn’t even see any redpolls around. A couple minutes went by.  My hand was frozen. Then one flew in. And another, and another, and so on.  There were several on the thistle feeder that my hand was resting on (it is hidden from view in the photo above).  Slowly I raised my hand upward so it was right beneath a feeding bird.  Just like that the little guy hopped onto my hand and started feeding! 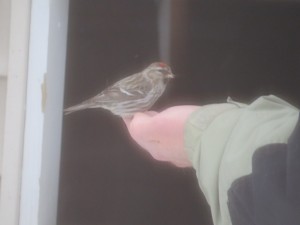 As it fed, dozens of these little birds were flying all around me to the feeders.  Some landed on my head and shoulders.  It was a crazy experience!  Since my back was to the house window, I slowly moved my hand with the feeding bird so Melissa could get a picture from the house.  It was incredible to feel this little pulse of life in my hand and have it trust me even as I moved it a couple feet away from the feeder.

(If you want to see a really cool video I shot the next morning of over a dozen Common Redpolls feeding off my hand, click here.)

The bird activity has been wild around our house with this latest winter weather.  Here’s a snapshot of the feeding frenzy of redpolls in the front yard.  I was feeding them by hand in the back yard.  I still can’t believe we have redpolls this late.  We must be getting more and more as the most southern migrants wing their way north. 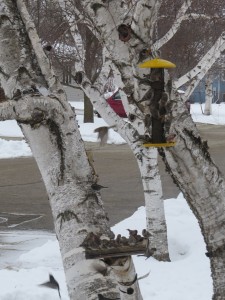 This bird has been one of my favorite yard birds – the male Oregon Junco.  Today he posed for a picture. 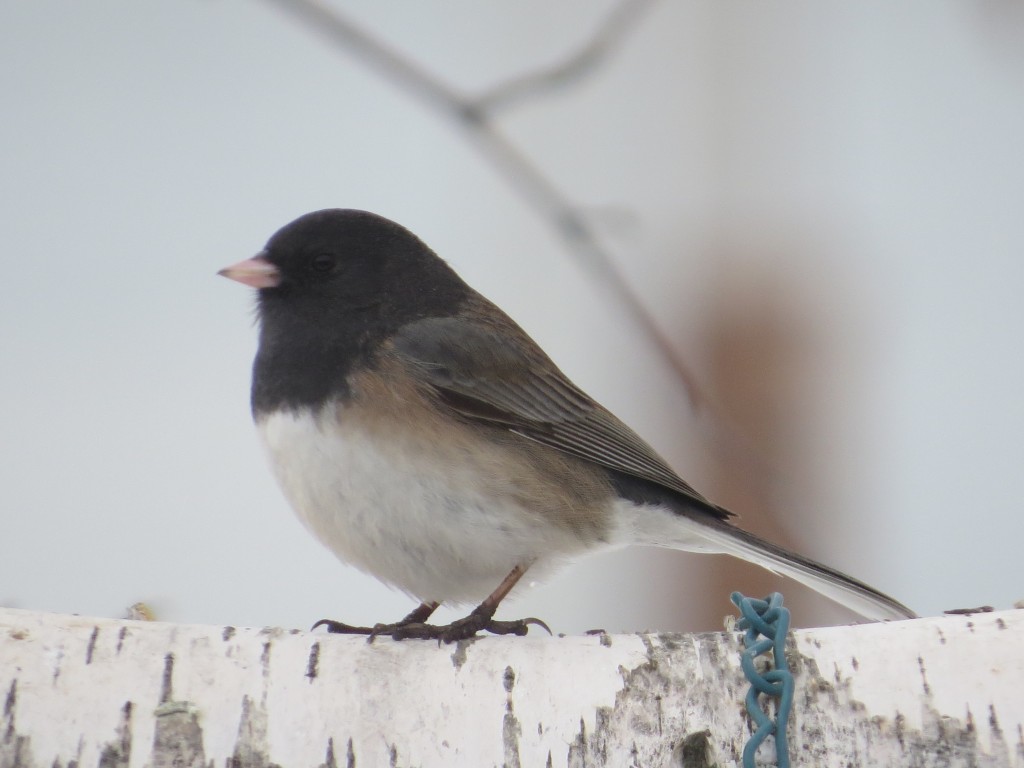 After this bit of fun birding in the yard, it was time to head to the Cities.  We drove in on Minnesota Highway 7 so that we could drop south through Carver Park Reserve by St. Bonifacious, an area with a few Osprey nesting platforms.  Each platform we found had no sign of activity, but the Reserve was beautiful with paved hiking and biking trails.  We decided we would drag the camper out here this summer. The next spot to check was an Osprey nesting site in Edina near the junction of the Crosstown Highway and Gleason Road.  An Osprey had been observed at this nest earlier this “spring.”  There was no bird for us when we got there.  Bummer.  At least this platform had sticks on it for a nest; the others were bare. 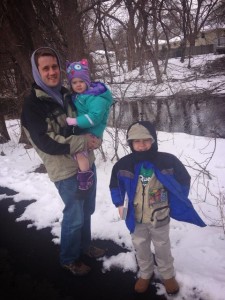 We were close to our next stop – Veterans Memorial Park in Richfield.  A pair of Great-Horned Owls had been known to reside in this park.  We got out to do a little walking, but we were frozen after just a couple minutes!  We did get to watch Mallards, a Belted Kingfisher, an American Goldfinch, a Great Blue Heron, and an American Kestrel, but there were no owls. We were striking out.  There were a couple more places to check, but desperation was starting to set in.  We took a break from birding so Melissa could go to a specialty running store to get some running shoes that were correct for her feet.  At least she hit her target for the trip.  She wouldn’t let me take a picture with her prize, though. After this stop we were near the High Bridge in St. Paul, so we went down to see if we could find the Peregrine Falcons.  We parked several hundred yards away from the bridge.  This time the girls opted for the warmth of the car.  We birders were on our own.  As we walked quickly to the bridge, we looked at the island on the Mississippi River to search for another Osprey nest site that had been occupied the prior weekend.  No luck.  The closer we got to the bridge the more we realized how massive it was and how many girders and supports there were to check out for the falcons.  Right away, however, I saw a little blob on the bridge on our side of the river.  Could it be?  I whipped out the camera to zoom in.  Yes!  It was the Peregrine Falcon, a super cool life bird!  This was the female on her nest. 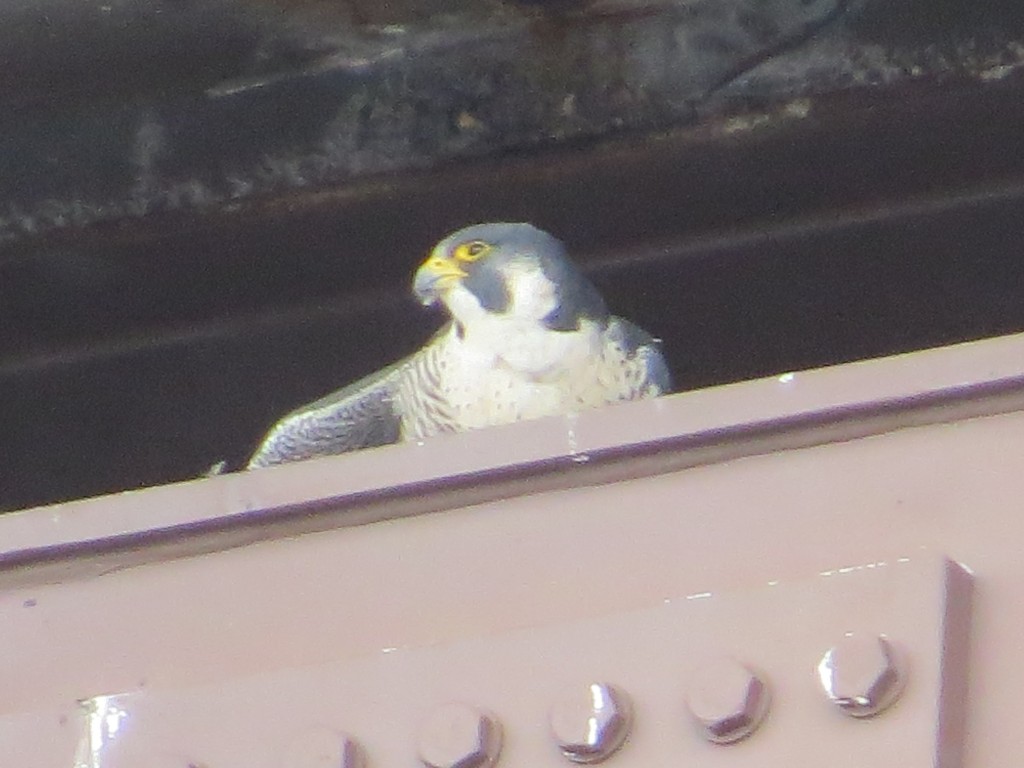 As we watched, we heard and saw the male come and land right near the female.  It was awesome to hear him “scream.”  It is a very distinct, unforgettable sound. It was very satisfying to finally hit one of our targets for the day.  I couldn’t believe how easily we found them. 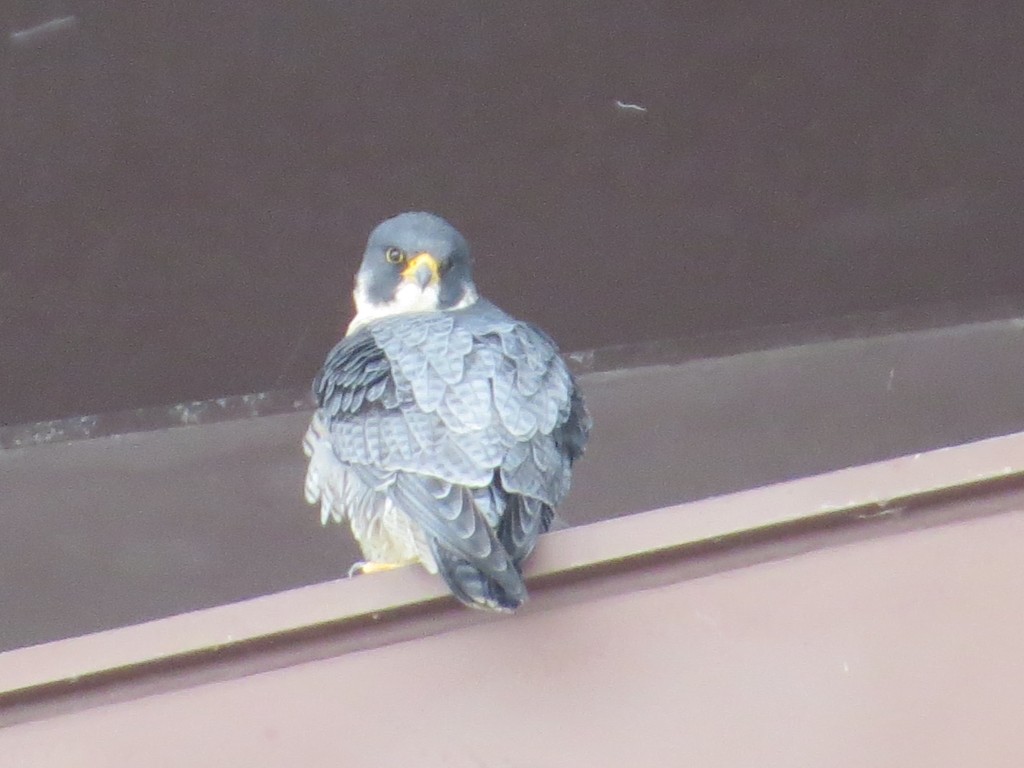 The birds were on the girder just above and to the right of Evan’s head.  If you look between the two short vertical supports on the right (just under the cement wall), you can see two small bumps on the horizontal cross-piece.  Those are the falcons. 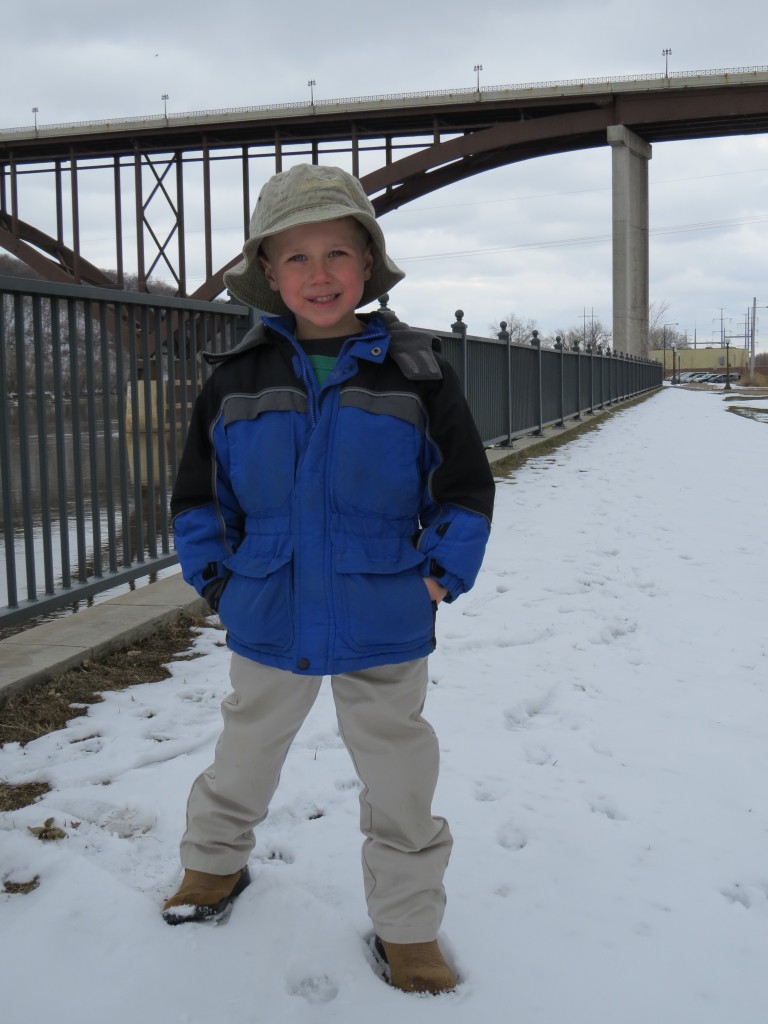 Making our way back to the car we observed a bunch of Double-Crested Cormorants on the river.  This was a life bird for Evan.  I just couldn’t bring myself to take a picture. I’ve never been fond of this ugly bird.  It was good to see a Great Blue Heron and an Eastern Phoebe, though. 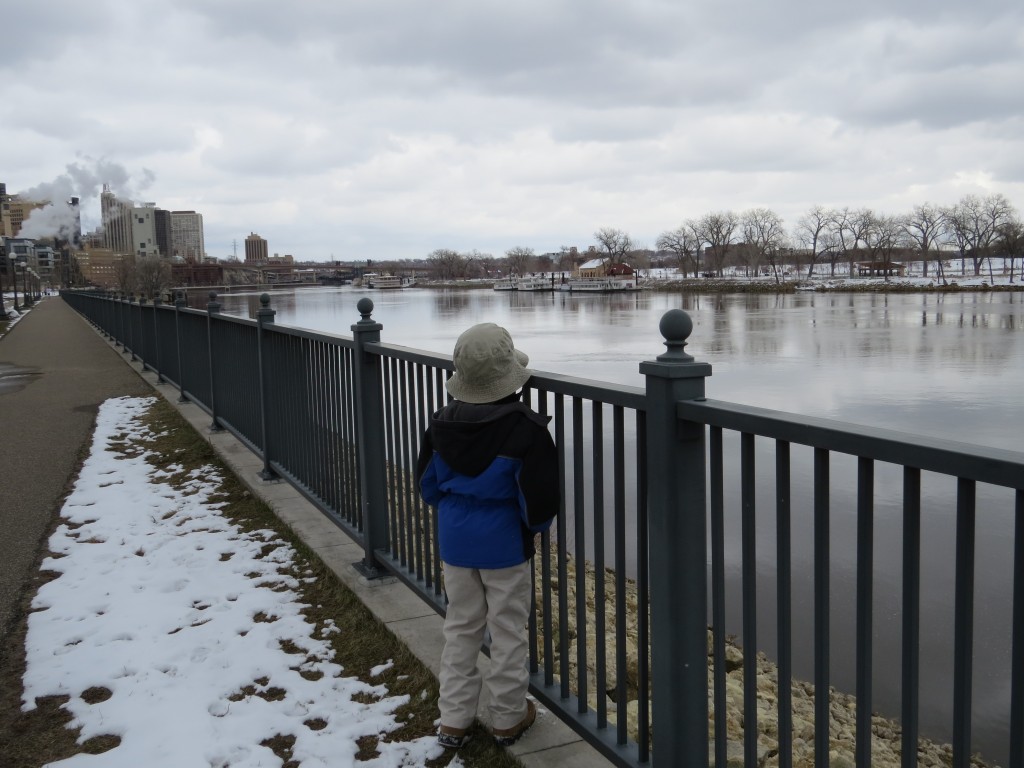 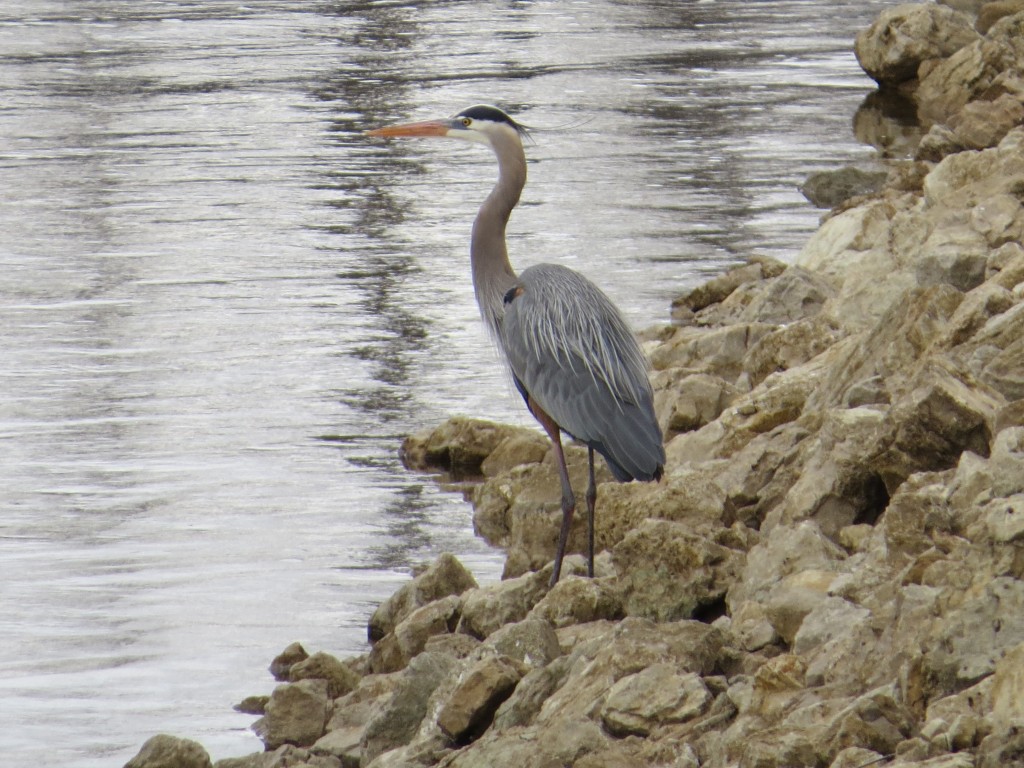 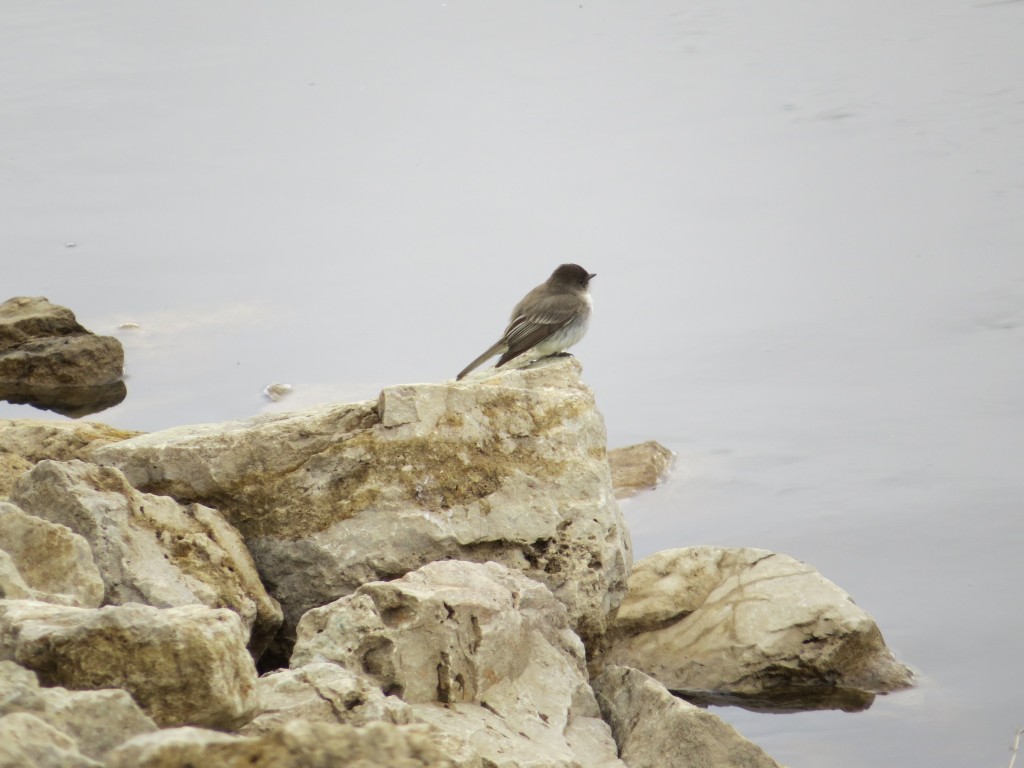 It was now time to go to my brother’s house in St. Louis Park.  The whole trip Marin had been impatiently asking, “When are we going to Uncle Jason’s?”  Before we went to his house, though, we decided to check the Edina nesting platform one more time.  As we approached the site on the Crosstown Highway, we saw a large, dark bird on the nest!  The Osprey! We pulled off the freeway and found a small parking lot where we could observe the bird from the comfort of the car. 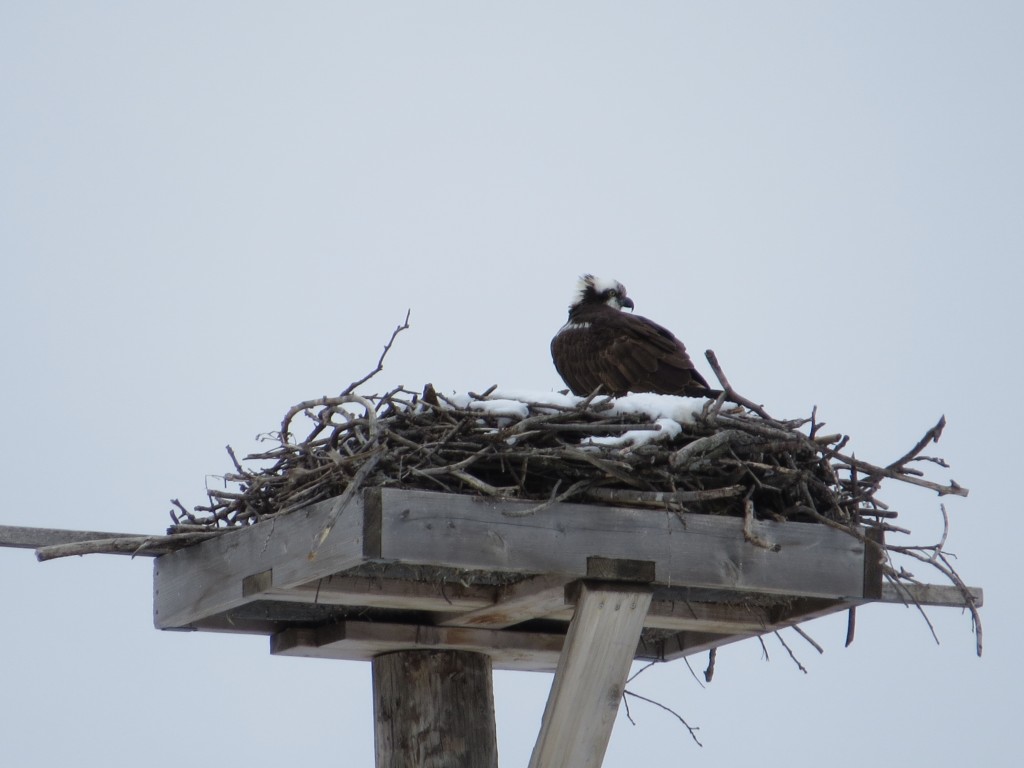 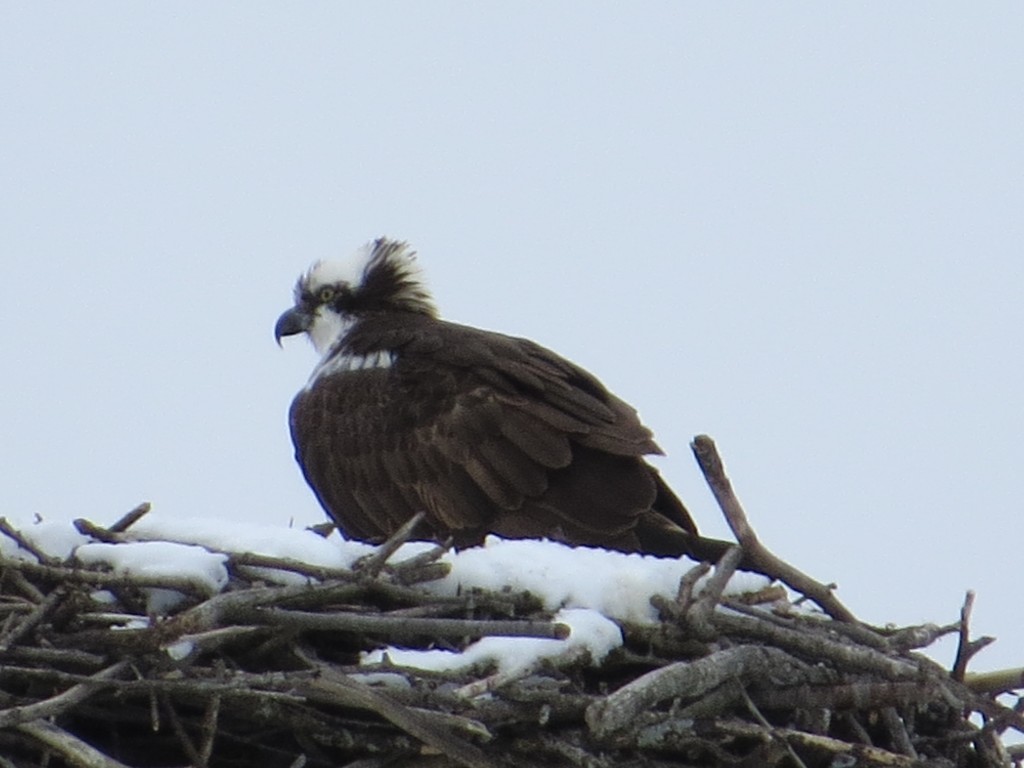 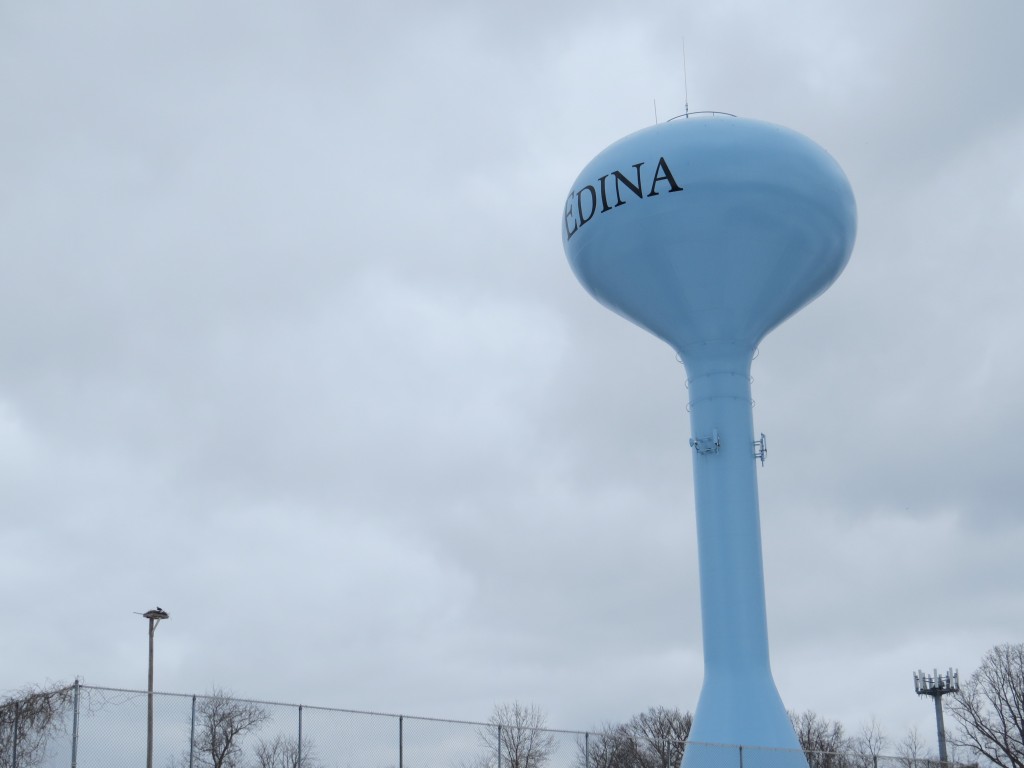 Vanessa told us tonight that this bird is referred to as J4 and comes from Iowa.  Apparently it has nested in this area for several years.  We hit our second target for the day and got to add another cool raptor to our life lists.  We were excited! 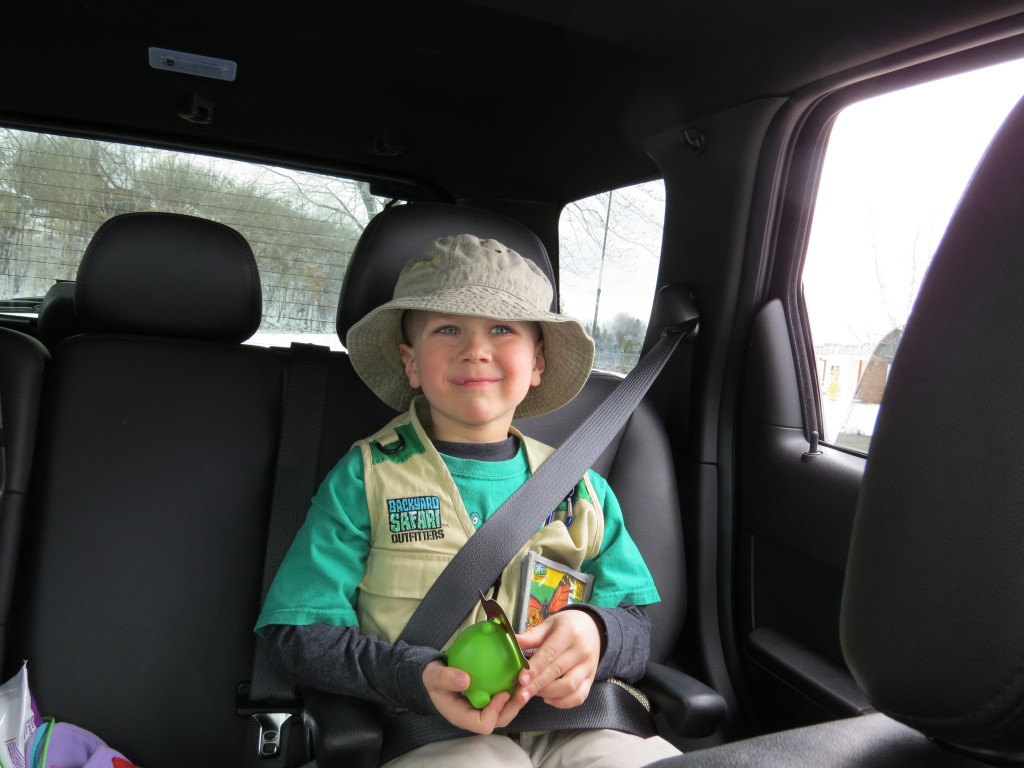 Well, maybe one of us wasn’t. 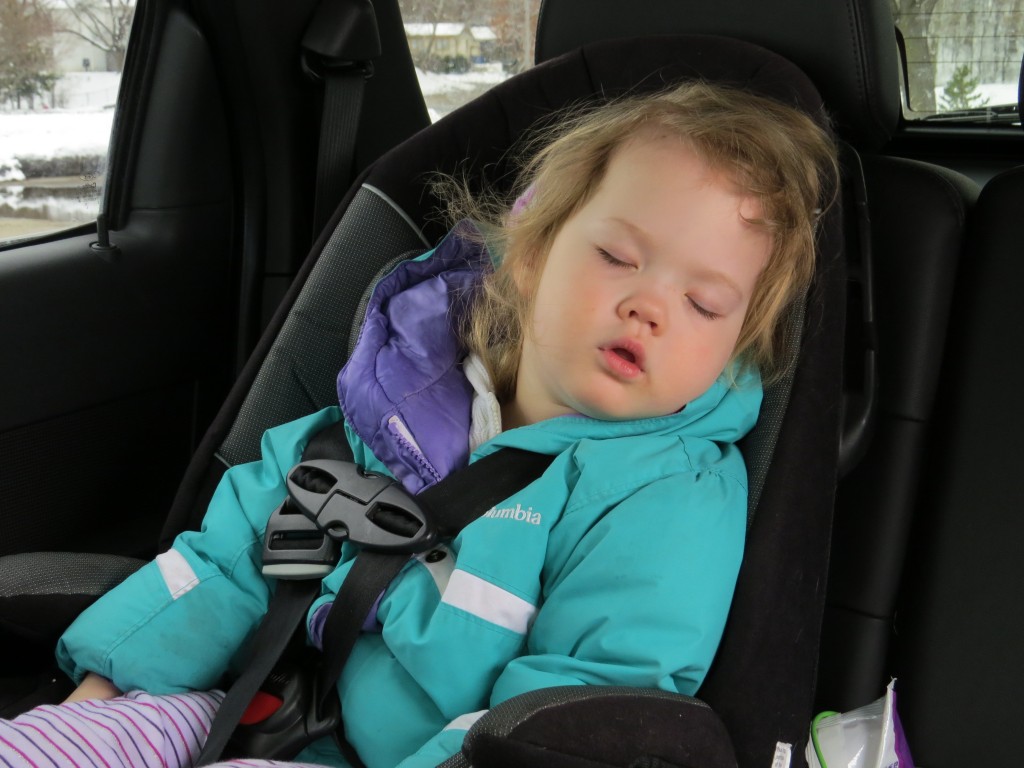 It was a successful trip.  We all got something we came for: birds for us guys, shoes for Melissa, and Uncle Jason’s house for Marin.  Metro birding was a lot of fun.  I can’t wait for our next trip to the Cities to hunt for birds.  There are some good ones there and lots of birders who report their sightings to help the rest of us.  It was a great day of birding all around.  I still can’t decide what my best birding experience was today – feeding that little bird or seeing those powerful raptors. Both were incredible memories that we got to experience as a family.