It was a fluke.  All four of us were completely ready for church nearly an hour before church started.  I still have no idea how that happened as we usually walk through the church doors in the middle of the first song. Evan, being the opportunist, asked if we could go check out the patch.  Why not?  It’s only a couple miles out of the way.  After all, we are still in the hunt for the Ross’s Goose or the fluke American Black Duck.  Worst case scenario would be seeing some swans and other cool ducks.

As we traveled down the gravel road to the flooded field, Melissa noticed a different looking bird flying in a small patch of young trees and shrubs.  We tracked it down, and it turned out to be the Northern Flicker.  This was a life-bird for Evan.  I’ve seen several up north.  I didn’t get much of a picture, but it was enough for identification. 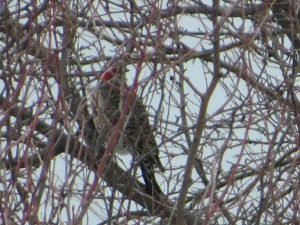 Common Grackles were flitting all over this little patch of woods and shrubs, but there was one black bird that did not match.  I knew it was something different.  It was right by the road, so I was able to get a couple of decent shots.  I didn’t know what the bird was, so identification would have to wait until after church.  We were super excited to find out it was the Rusty Blackbird – a species that is uncommon and in decline.  Not only that, but they only pass through our area during migration.  For being just a black bird, it was pretty cool.  Needless to say, this was another life bird. 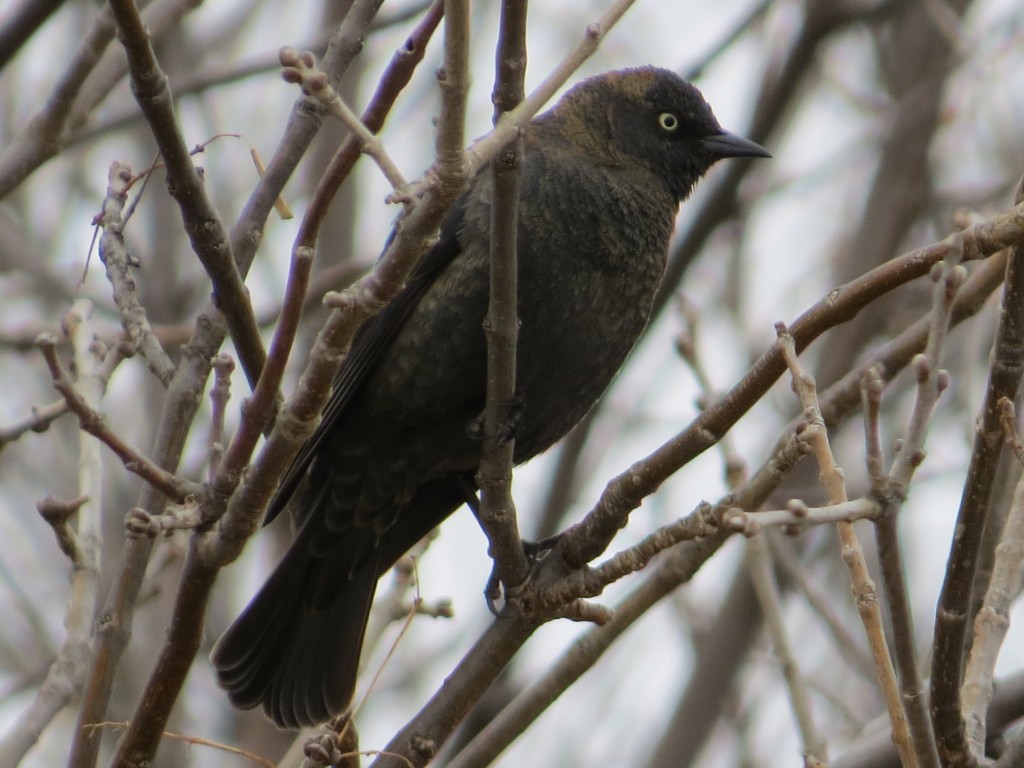 We continued our drive.  I was hoping to run into all the Eastern Bluebirds we saw the day before so I could get some pictures, but they weren’t to be found.  These next birds were found by Melissa.  Even though they were in plain sight, I almost missed them!  In two weeks I’ll be hunting for a big tom.  The more I go birding, however, I just don’t know if hunting will be as exciting as looking for birds.  But it’s a bucket-list item. 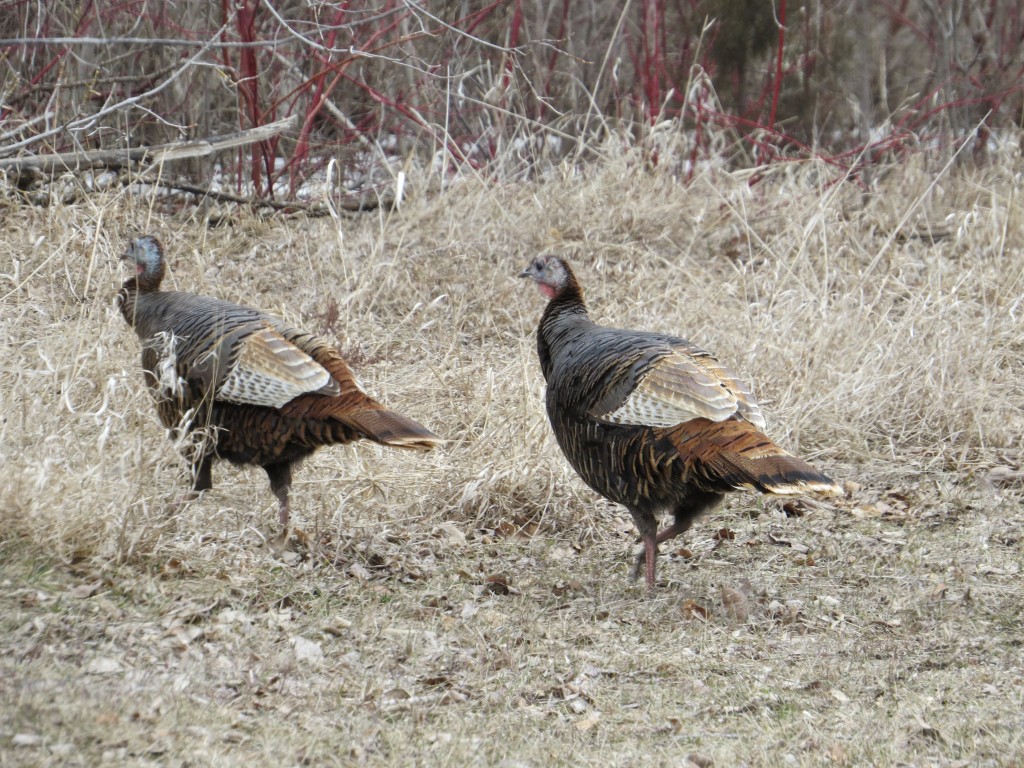 After church we decided to fight back against this slow-moving spring by going out for another nature walk.  This time we went to Sibley State Park.  The weather was cool, but it felt good to walk and just be outside.  Evan had fun riding his bike through puddles and snow-covered paths.  We picked up our first Eastern Phoebe for the year and saw a lot of the common winter birds.  At the interpretive center, though, I looked at some birds high in a tree.  I snapped some pictures but couldn’t see the LCD well in the sunlight.  Getting into the car, I was able to see that we got the Fox Sparrow!  This was a definite life bird and one I had been anticipating because I’ve been monitoring the migration reports on MOU-NET.  It was really unusual for this trio of sparrows to be high in a tree.  They are usually found on the ground. 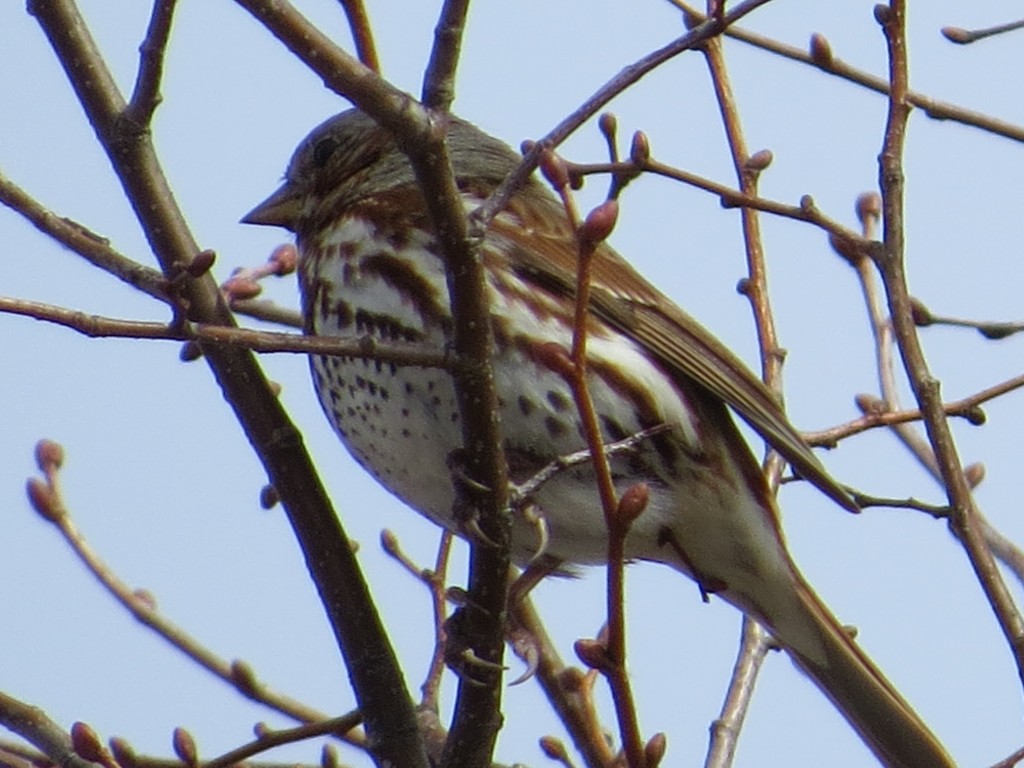 While we were packing up the car to go home, we heard a crazy bird noise behind the interpretive center.  “What is that?” I asked.  Without missing a beat, Evan said very authoritatively, “It’s the Sandhill Crane!”  With all his studying of his bird books and bird apps, I did not doubt him for a second.  I had no idea what a Sandhill sounded like, but we raced to the other side of the building to get a look. We’ve both seen Sandhills before; I just wanted to confirm his knowledge because it continues to impress me.  We didn’t find them; they were either on the other side of a hill or just flying through.  Later on I did listen to the sound of a Sandhill Crane on our bird app, and Evan was absolutely right.

Speaking of his studying and knowledge, we checked out a Wildlife Management Area on the way home.  We saw a meadowlark flying, and Evan asked if it was the Eastern or Western.  I told him I didn’t know and that he’d have to learn the songs of each as that is the best way to distinguish the two species.  He replied, “Yeah, I guess I’ll have to study….I suppose I’ll have to stay up until 9.”

After we got home I touched base with Steve, and we decided to chase Randy’s sighting of the American Black Duck from the previous day out near Pennock.  It was a rainy evening with not a lot happening in the bird arena.  We did get another life bird, though.  This time it was a shore bird – the Lesser Yellowlegs.  As I was searching for it so I could take a picture, I got distracted by this drake Blue-Winged Teal and never did get the picture.  I’ve always liked this duck, so I had to take the shot. 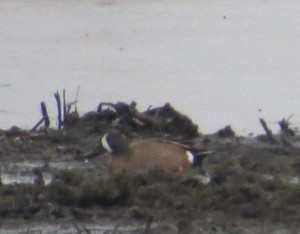 Steve did manage to get the Northern Pintail for his Big Year.  It had eluded him at the flooded cornfield on two attempts even though they’ve been regulars for most of our visits. All in all it was a good birding day.  It was nice to add some lifers and to spend time in the outdoors with family and friends.