This week I’ve been going through my normal work routine while Melissa and the kids are home on spring break.  It’s never easy to work while they’re at home, and this lingering weather only aggravates that fact.  Today, however, I got a nice pick-me-up when I checked my email.  At 11:00 Randy sent me a one-line email that said he had a Barred Owl 15 feet from his window and that he had just fed it a mouse.  The Barred Owl is a very cool bird that we just added to our life list a couple weeks ago.  I replied thanking him for letting me know, but I still had to put in 5 hours of work plus a commute home.  There was no way the bird would be around.  Well, Randy sent me another email at 4:00 saying the owl was still there.  I didn’t see it until 4:30 and hadn’t left work yet.  Was I too late?

On the drive I called Randy who said the bird was still there and that we were welcome to come watch it.  We were a half-hour out.  I contacted Melissa to tell her I would be in and out of the driveway to grab Evan.  Even though we’ve both seen this species, a twinge of nerves and excitement ran through my belly – would it be gone?  Would we be lucky to get two sightings in as many weeks?

When we got to Randy’s house, he calmly greeted us outside and asked Evan if he wanted to see the owl.  Evan excitedly nodded in his shy-way when he’s around new people.  Randy led us into the living room of his house which overlooks a mature woods and numerous bird feeders.  He stood in front of his patio door and did not point anywhere or look outside in any direction.  Instead, being the teacher he is, he faced us and said, “Let’s see how good you are.  If you stand right in this spot, you will have a clear view.”  Easy.  I stood and looked.  And looked.  Nothing.  “He’s about 20 yards away.” Still nothing.  Randy could tell we were looking high, and he said, “Look lower.”  Now I was getting frustrated with myself.  How could I not see an 18 in. bird in a tree?  After a couple of minutes of this, he finally pointed it out to us.  And here is the very cool Barred Owl that we saw. 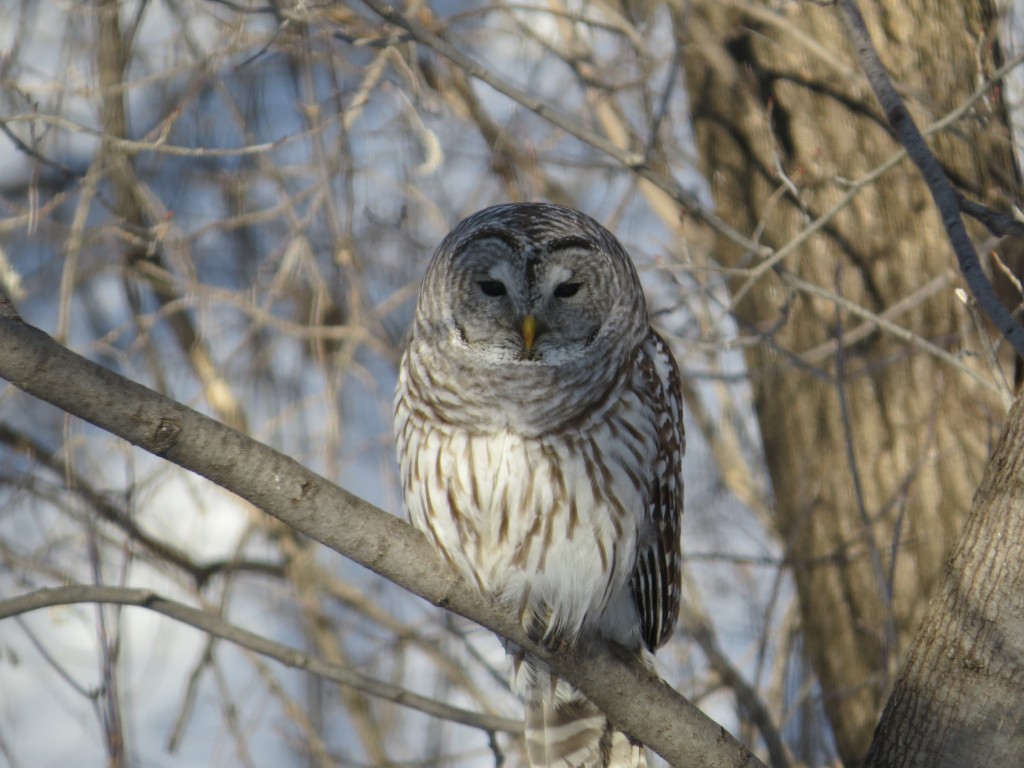 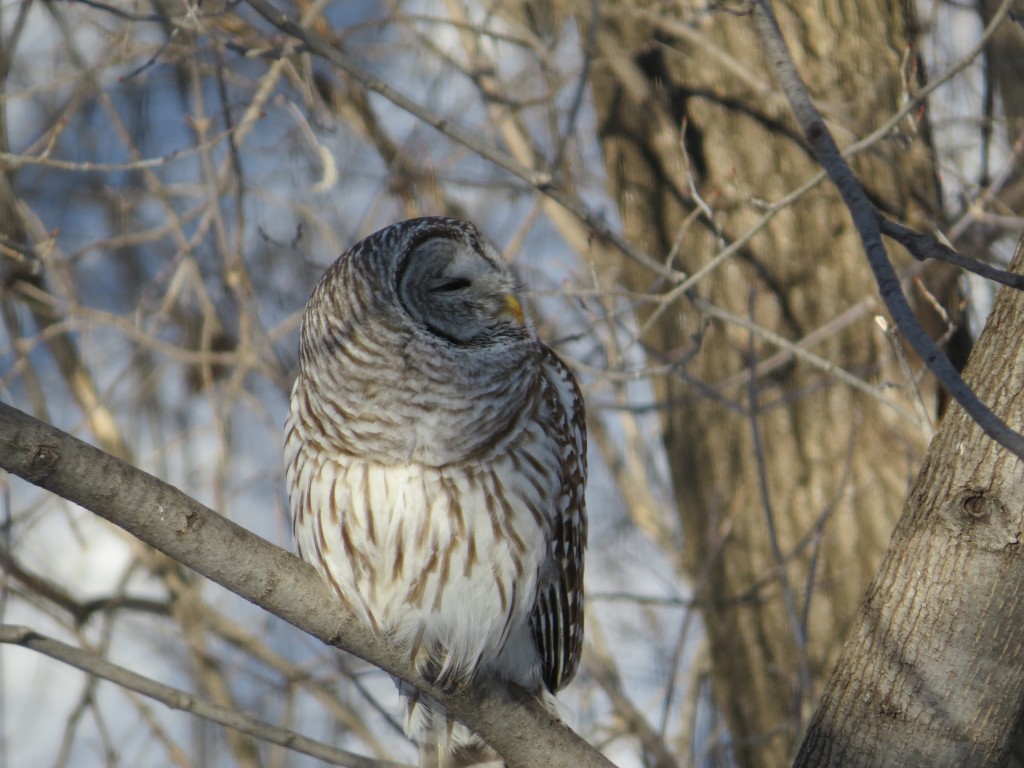 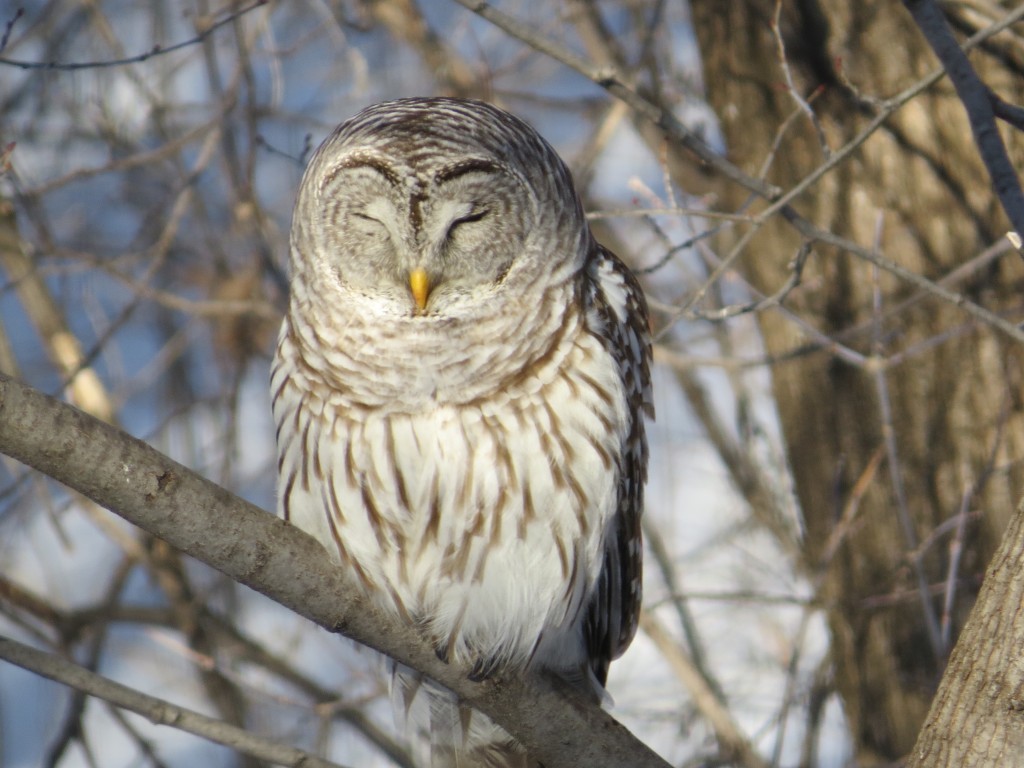 You can see how the Barred Owl’s coloration blends into this backdrop of branches and snow.  No wonder it didn’t jump out at us.  Evan had the hardest time seeing it.  Both Randy and I lifted him up trying to point it out.  After several attempts like this he finally saw it. 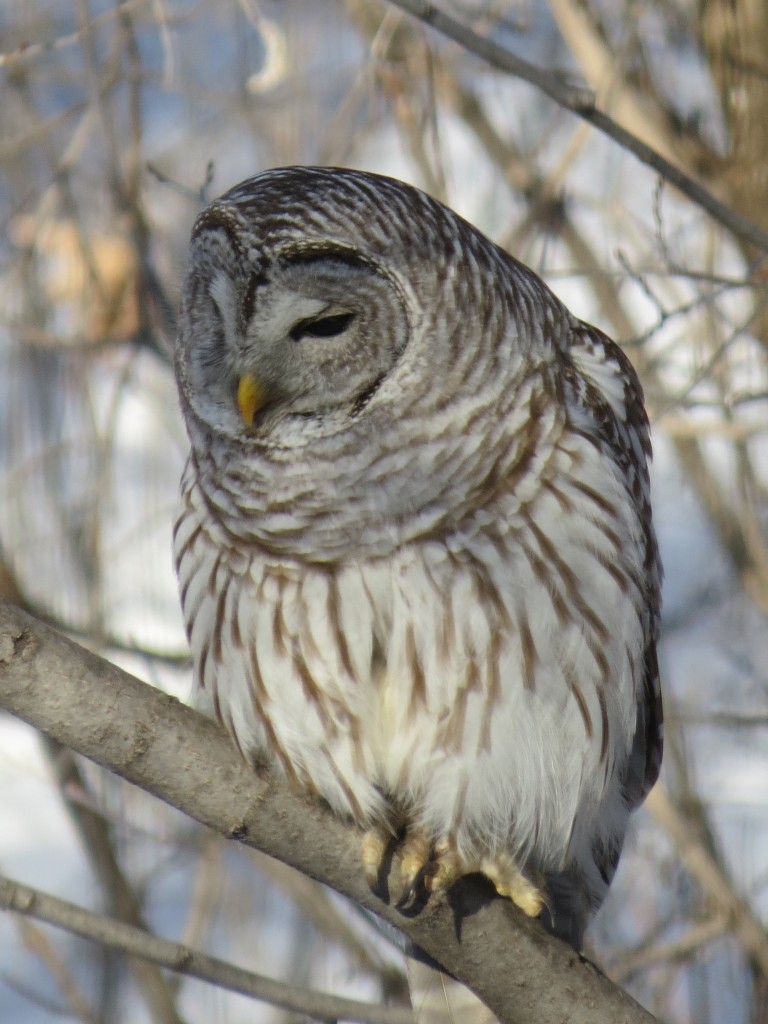 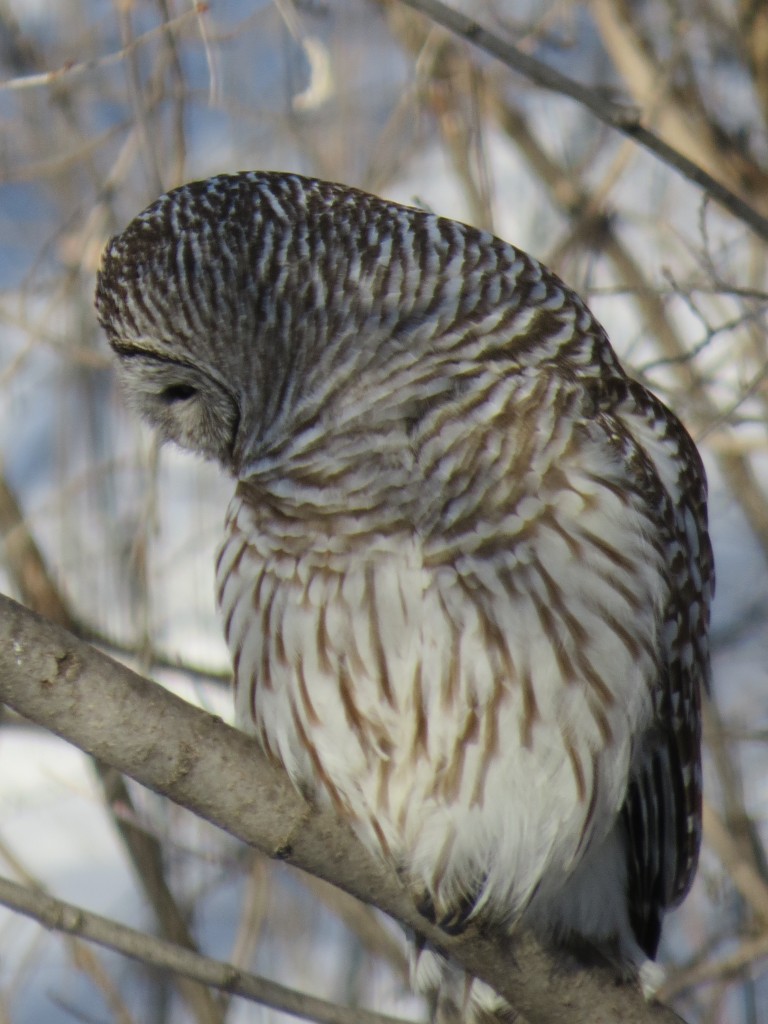 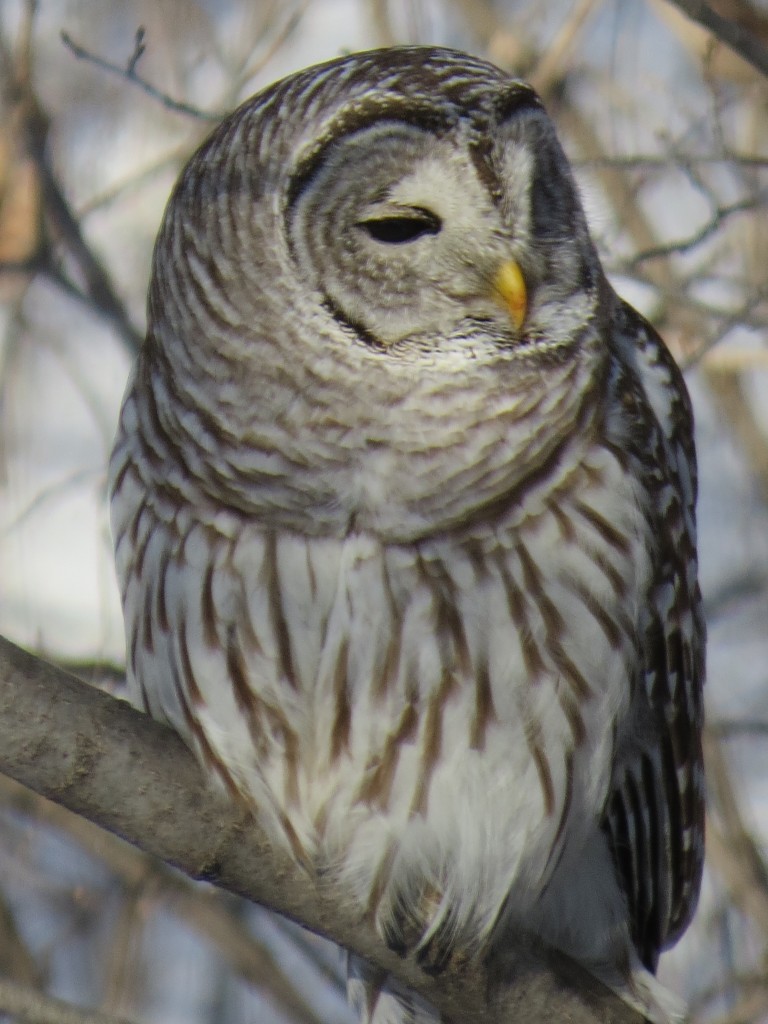 After watching this cool bird along with all the other avian activity in Randy’s yard (We picked up a life bird – the Brown Creeper), it was time to go.  Foot Lake was on the way home, so we went to check out this new birding patch of ours. 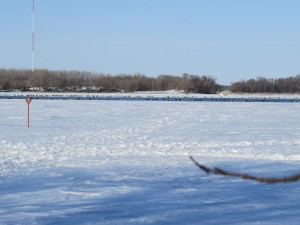 There were hundreds of geese today.  As I glassed through all the Canadas from right to left, I saw a different species of goose – the Greater White-Fronted Goose – another lifer!  I had just learned about these geese a week ago when early migration reports were coming out of southern Minnesota.  These geese only pass through our state and don’t stay long.  What a pleasure it was to see them!  As I’ve said before, birding is a timely hobby.  What’s here today won’t necessarily be here tomorrow. 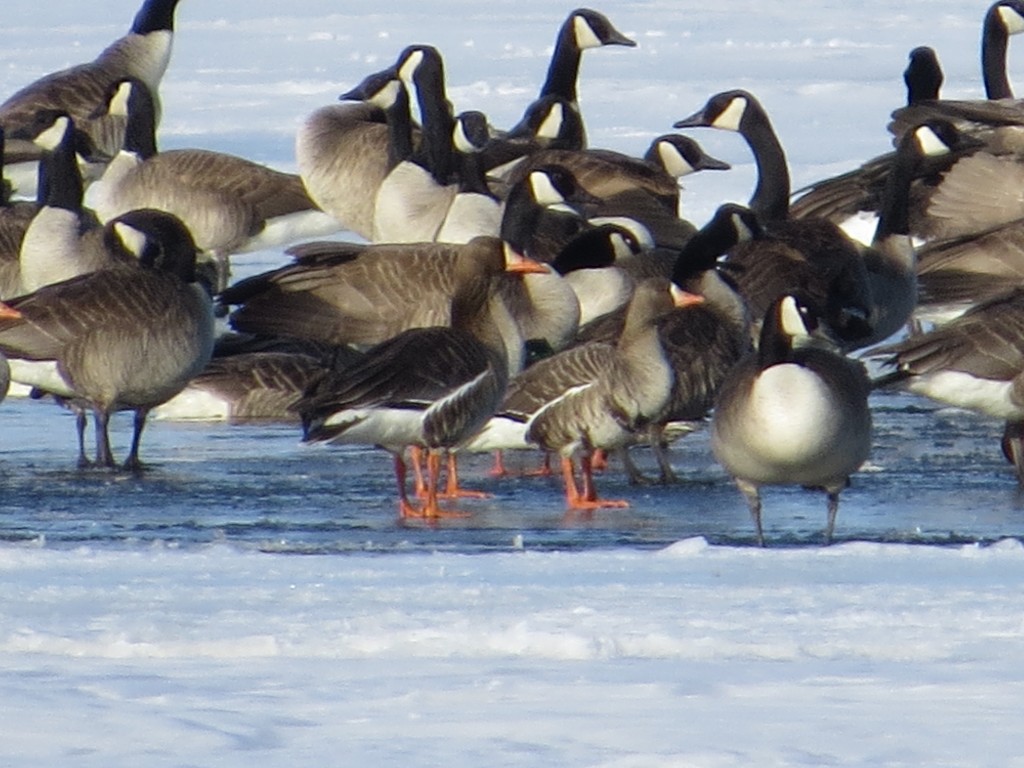 Can you pick them out below?  Hint: Look for the orange feet then look up. 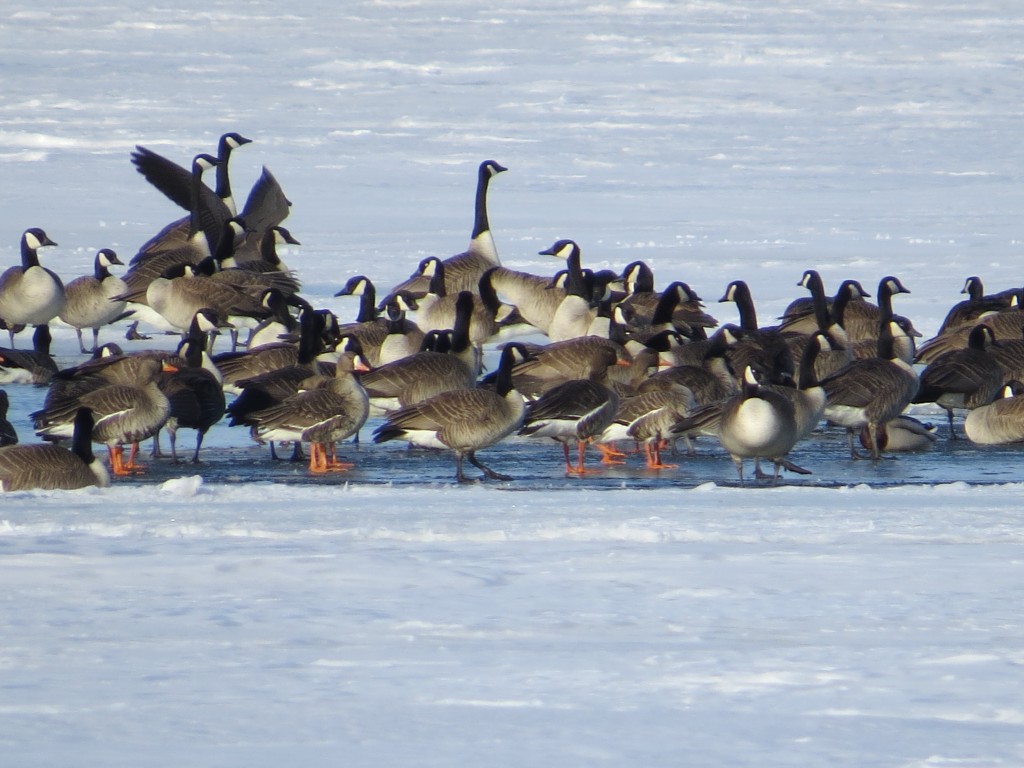 I continued to glass all the geese, and I found another species of geese that was on my radar – the Cackling Goose – another lifer!  The Cackling Goose looks like the Canada, but is smaller, has a shorter neck, and has a stubby bill.  It was only recognized as a separate species in 2004. Can you find it in the picture below? 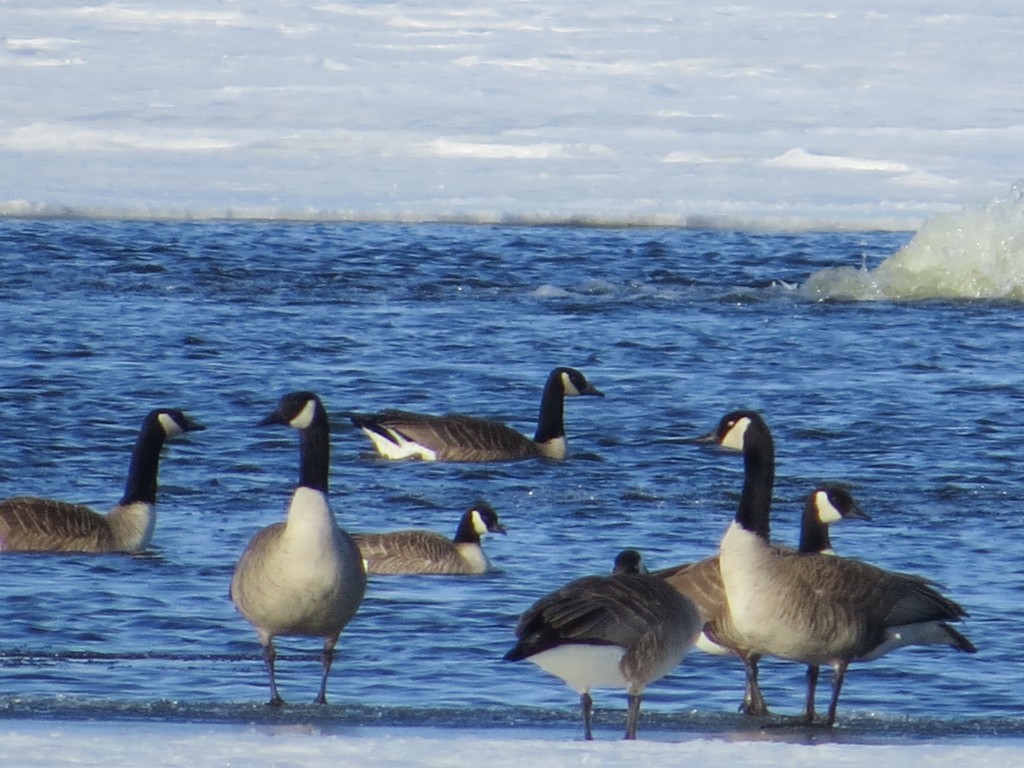 Here is a three goose picture that I got.  Do you see all three species? 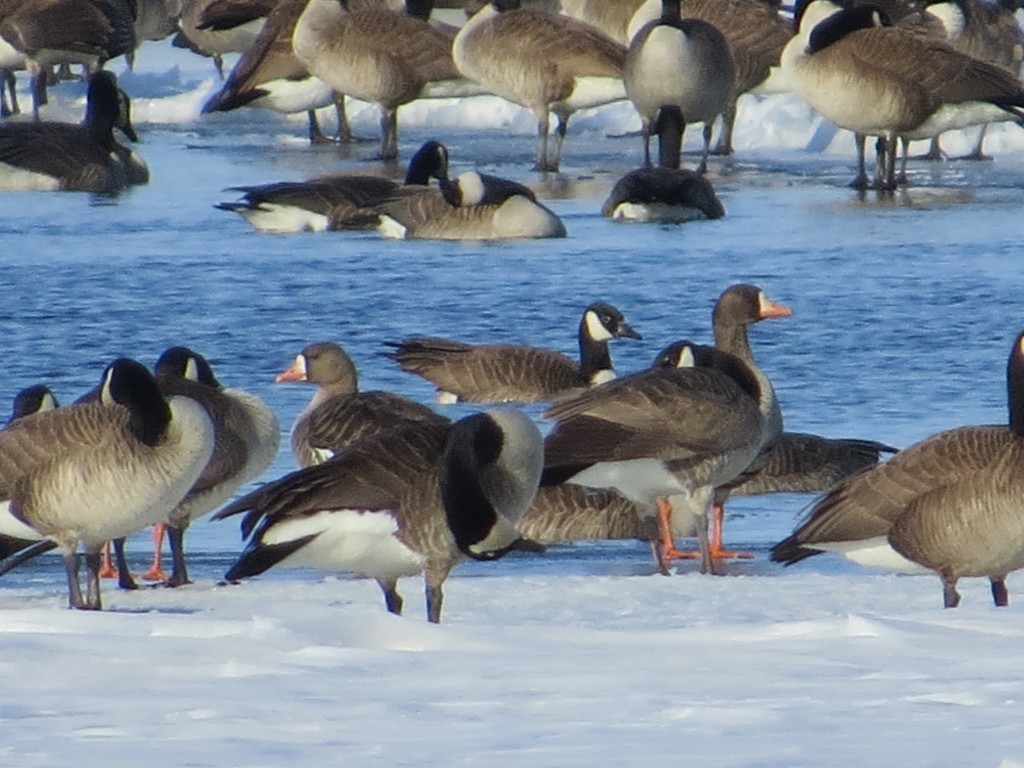 We saw some species of ducks among all the geese: Mallards, Common Mergansers, Hooded Mergansers, Common Goldeneye, and Wood Ducks! Yes! 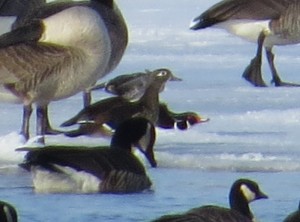 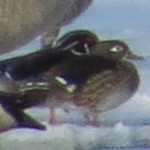 We also got to see a new life bird – the Ring-necked Duck!  Its name is a misnomer.  It actually doesn’t have a ring on its neck, but it does have one on its bill.

After showing Evan all the birds through the LCD, we headed to the neighboring Willmar Lake where there is also some open water.  More geese, but it was nice to run into this flock of Northern Shovelers! 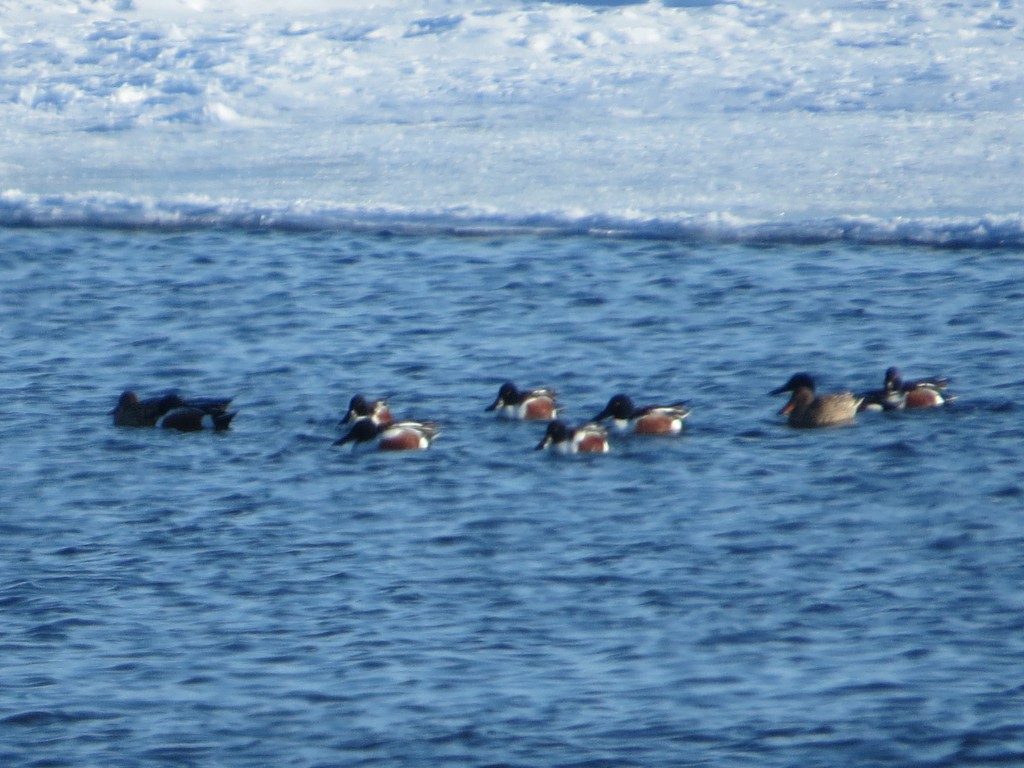 Despite the wealth of life birds for us today and the owl sighting, Evan was eager to get home.  Melissa had planned to dye Easter eggs with the kids tonight, and Evan didn’t want to miss it.  A birding guide in northeastern Minnesota once described birding as one big Easter egg hunt.  I can’t think of a better way to put it.  There’s always something to look for in any location during any season.  Sometimes the eggs are easy to find, like an American Robin in your yard, and sometimes you need a more experienced person to point the egg out to you, like Randy showing us the Barred Owl.  We had a thrilling hunt today and got to put some really cool eggs in our basket.