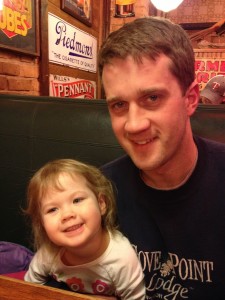 After the girls picked us up Saturday afternoon, the four of us slowly made our way to Duluth through the blizzard for a two-night stay at a Country Inn and Suites.  Once checked in, the kids were dying to go swimming.  I was dying to see an owl.  We told the kids we’d first go out to eat at Grandma’s restaurant in Canal Park, a site of recent Snowy Owl sightings near dark.  We didn’t see any, but there was still a bit of daylight left while we dined.  Darkness would soon be upon us, so before everyone was finished eating, I sneaked outside the building to take a quick look at the top of the flagpole, a known perch for the Snowy.  Nothing.

We went back to the hotel and swam and swam. The plan for the next day was to head up the North Shore.  I wasn’t optimistic because the Boreal Owl sightings had abruptly ended.  But before our Shore adventure, the kids had us (or I should say me) scheduled for more swimming. When I woke up that morning I checked my email and saw an MOU-Net posting from the middle of the night.  In my morning haze I could hardly believe the subject line I was reading: Great Gray Owl along the North Shore.  Wow.  The Great Gray Ghost. The Phantom of the North.  The owl that Jack Black’s character in The Big Year hunted for with his dad.  Could it be our day? With an elevated heart rate, I read the body of the email and saw the accompanying picture of the bird hunting from the top of a power pole.  The blizzard in the background was proof it was from late last night.  A local guide, Erik Bruhnke, wrote in the posting that he saw this one on his way back to Duluth from Sugarloaf Cove late in the evening.  Quickly I fired off an email asking for a more exact location.

As we ate breakfast and soaked in the chlorine brine, I kept wondering if Erik had replied to me.  Getting back to the room, I grabbed my phone.  No email, no text, no missed call.  I was desperate for the location because Sugarloaf Cove is a good hour and half drive from Duluth.  That’s a long trip to make for just the chance of seeing a bird.  After waiting around a bit with no response, we decided to just start making our way up the Shore.  The first stop was Canal Park and Park Point.  The kids and I had never been across the lift bridge and out onto the Point, so we drove across. 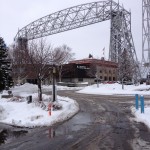 As we did, we saw dozens of ducks in the open water of the canal.  Everything else in the harbor was iced over. Evan wanted to stop and look at the ducks, but we decided to drive out to the end of Park Point.  I had no idea how long it was which only felt longer with every, “Can we please go back and look at the ducks?”

We drove all the way out to the end and back and were finally able to stop to view the ducks.  I was curious to see if there were any lifers for myself.  I grew up on a lake seeing lots of ducks, but the waters of the big lake create a coastal effect bringing in some unique species.  Just a few dozen Mallards and a handful of Common Goldeneyes were there today.  At least Evan got a lifer with the goldeneye, which is always a thrill.  They were pretty shy and wouldn’t come close for a picture.  Zooming doesn’t give the best pictures, but you get the idea of what these birds look like.  Goldeneyes are diving ducks, which means they dive for their food.  Many of the divers have this crisp, black and white plumage. 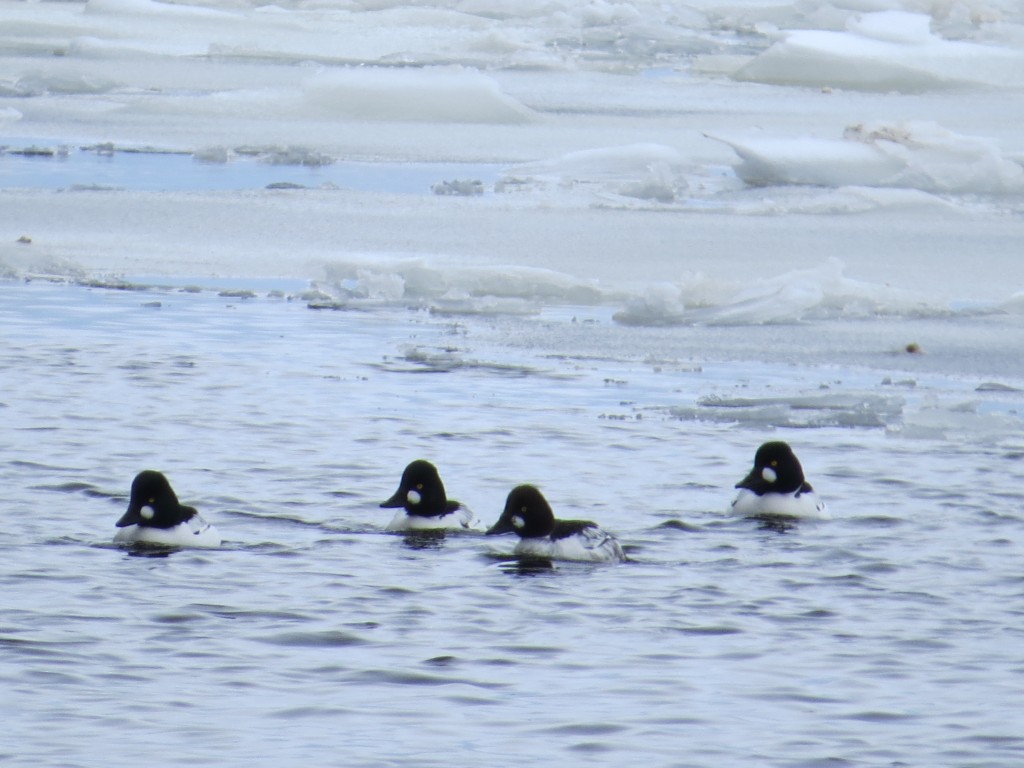 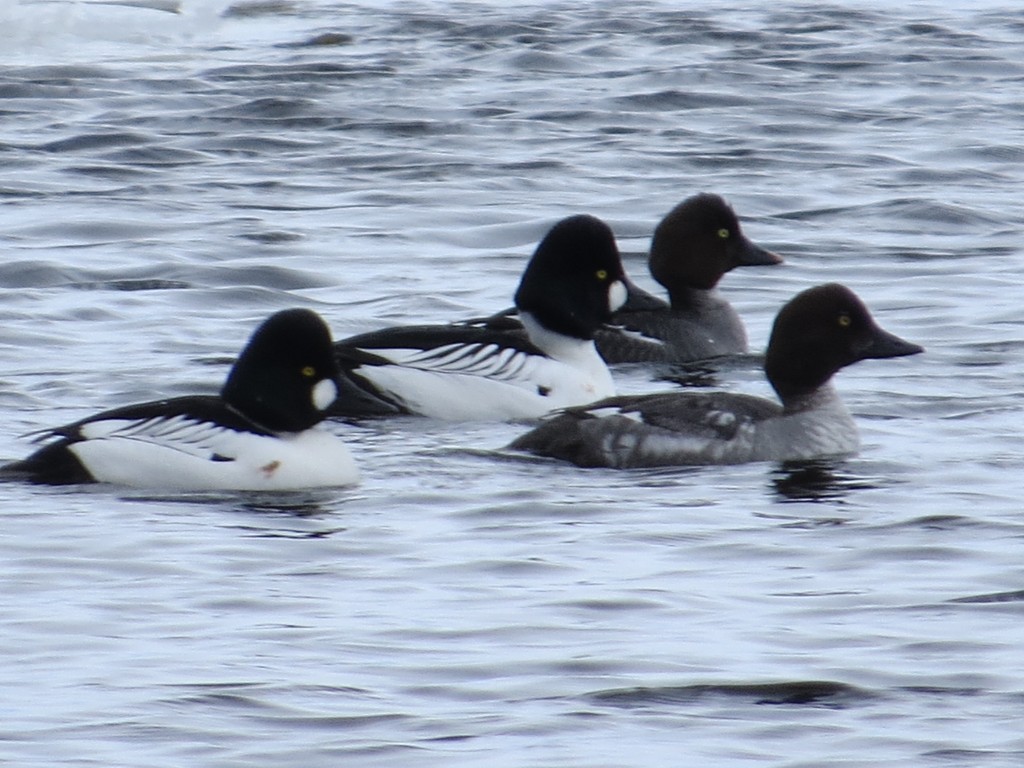 We saw some gulls, too, but I just haven’t gotten into gulls.  Maybe someday I’ll study them as I continue to slide across the spectrum of birders to total bird nerd, but I’m not there yet.

With the ducks out of the way we hit Scenic 61 to Two Harbors.  I scanned every tree as best I could to look for a 10 in. Boreal Owl.  Actually I think we watched cars more than trees.  Why is that guy stopping?  What are those cars doing?  Are they onto an owl?  And the answers were: he’s turning, they’re fishing, and nope.  I did make note of the incredible beauty of the day with the pine boughs laden with the fresh, heavy snow and the dark blue waters of Superior contrasting with the ice formations of the shore.  Only Lake Superior can make a cloudy day look breathtaking.

Steve had told me in the phone conversation the day before to look around Stoney Point for a Great Gray Owl.  So we went down Stoney Point Drive which brings you right out by the water.  Right away I saw a guy stop and get out with a camera!  He went down by the lake. What was he going to look at? We trailed another guy who stopped for a looong time.  I saw him pull out a huge camera and aim it at something.  What was it?  We didn’t see anything.  Evan and I got out to walk down to the shore to see where the first guy was.  It turns out he was just taking pictures of the lake and the ice on this incredible day.  I think he missed the best shot available. 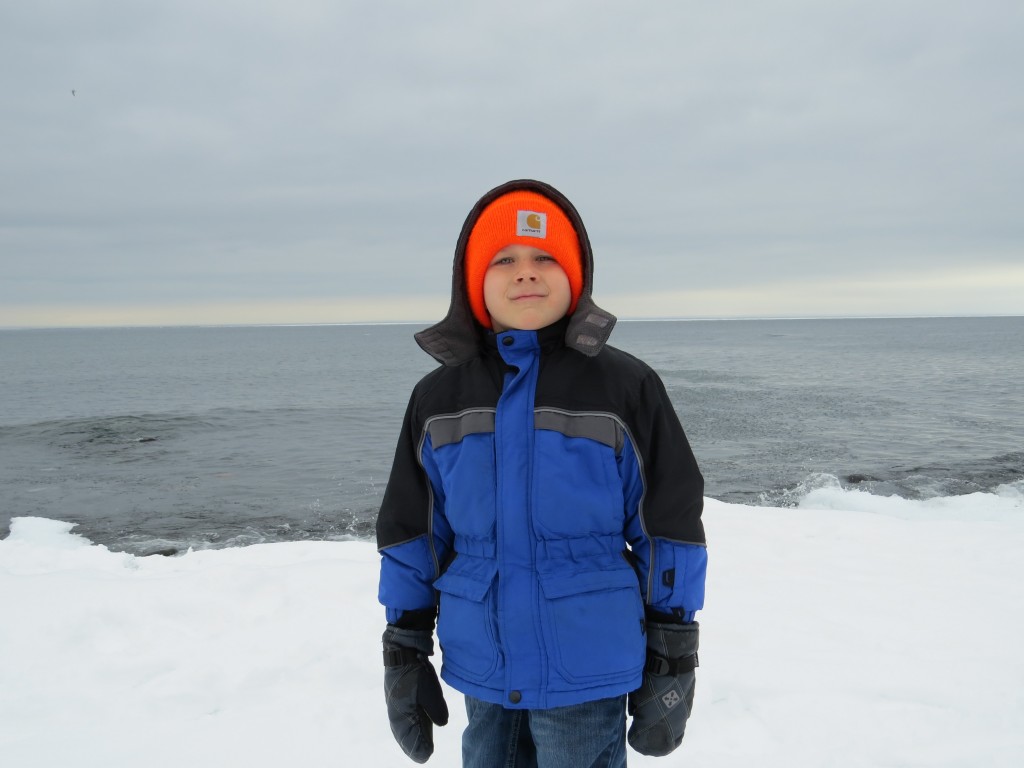 We got back in the vehicle and made our way to Two Harbors.  Once in Two Harbors, we drove down by the water.  Long-tailed ducks had been reported in both bays not too long ago, but they weren’t there this day.  By now it was getting to be lunch time, so we continued up the Shore and stopped at the famous Betty’s Pies for lunch. 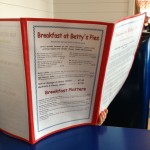 Tragically, the food was so filling that we didn’t save room for pie!  We’ll correct that mistake next time we go to the North Shore.  By this time the kids were starting to get antsy for the pool.  Melissa could tell I wanted to push on to Sugarloaf Cove, so we decided to keep driving.  At one point I thought I had the owl for sure.  I got out of the car and zoomed in only to see a big Common Raven.

After an emergency stop in Silver Bay for some pull-ups and wipes, we were driving up 61 when a call came in – Erik Bruhnke!  Erik told me the spot where he’d seen the owl.  Coincidentally we were in the exact spot of the bird when he called.  Unfortunately we weren’t seeing the Great Gray anywhere.  Erik told me that owls are best seen in the first and last hours of the day.  Ugh.  Right place, wrong time.  It was 3:30.  There was no way we could wait around for the chance at seeing the owl.  So, we turned around and headed back to Duluth.

I tried not to feel defeated, but it was getting tough.  However, my spirits were buoyed by looking at the scenery and just being with the best people I know.  After all, none of us had seen Split Rock Lighthouse in the winter.  What a treat that was.  Melissa took some great pictures of this memory. 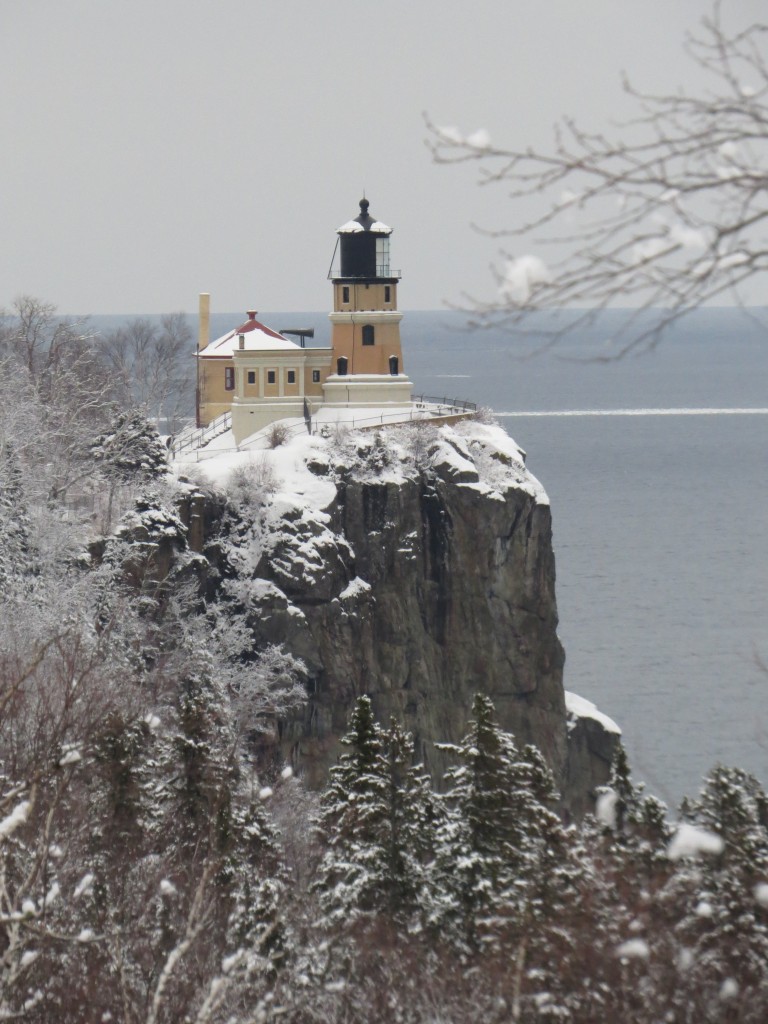 I held out hope for a Great Gray on the way home as they’d been sighted all over the North Shore.  Still nothing.  When we got near Duluth I decided to venture across the bridge into Superior, Wisconsin to scan the airport fields for a Snowy Owl – another tip from Steve.  We were going through downtown Superior when I looked up at the top of a building and saw an owl!  I looped around the block for a better look.  Well, I saw an owl all right… 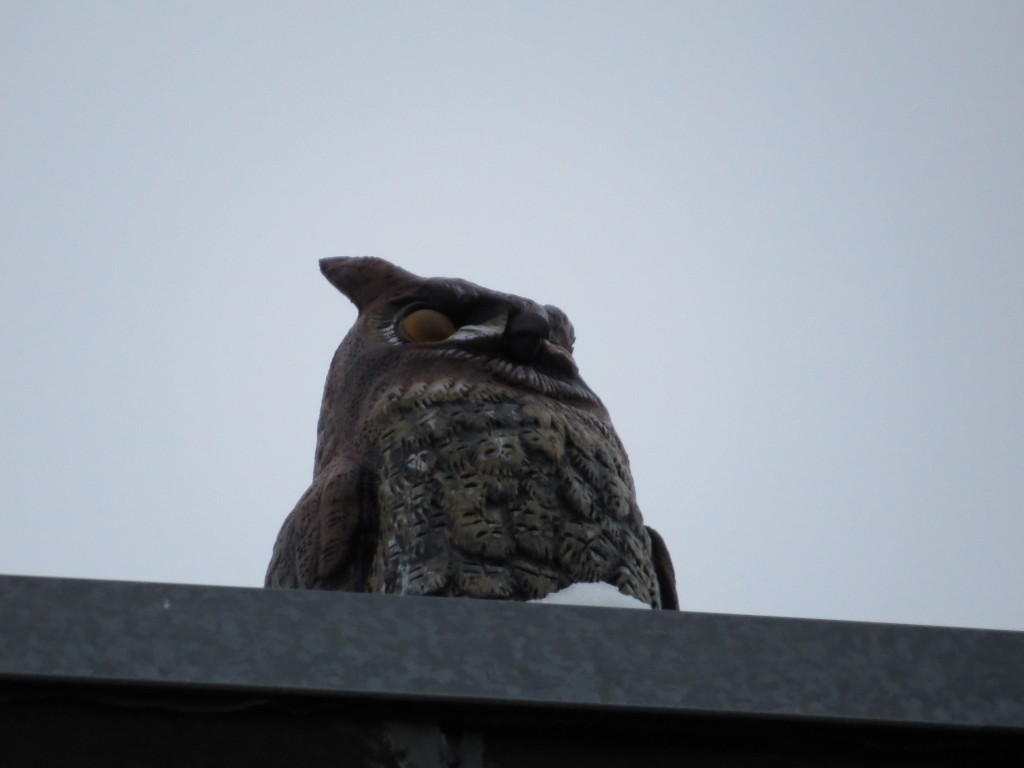 We got to the airport, and I did a quick scan.  The kids had been really patient with this drive, and I needed to reward that patience by getting them back to the hotel soon.  No owls at the airport.  (The day before I wrote this post I found out a Snowy was sighted near Culver’s in Two Harbors the day we were there.  In fact, we had gone by Culver’s twice.)  I had turned off my birding senses for the day.   I was bummed.  Tomorrow we were headed home.  I was driving away from the airport and winding through a residential area when POW!  A lifer sitting in a tree in someone’s yard – the Sharp-Shinned Hawk!  I slammed on the brakes, and Evan and I flew out of the car to see it.  I’m sure the locals thought we were crazy. This was an excellent consolation prize and a good ending to an almost no-bird, birding venture. 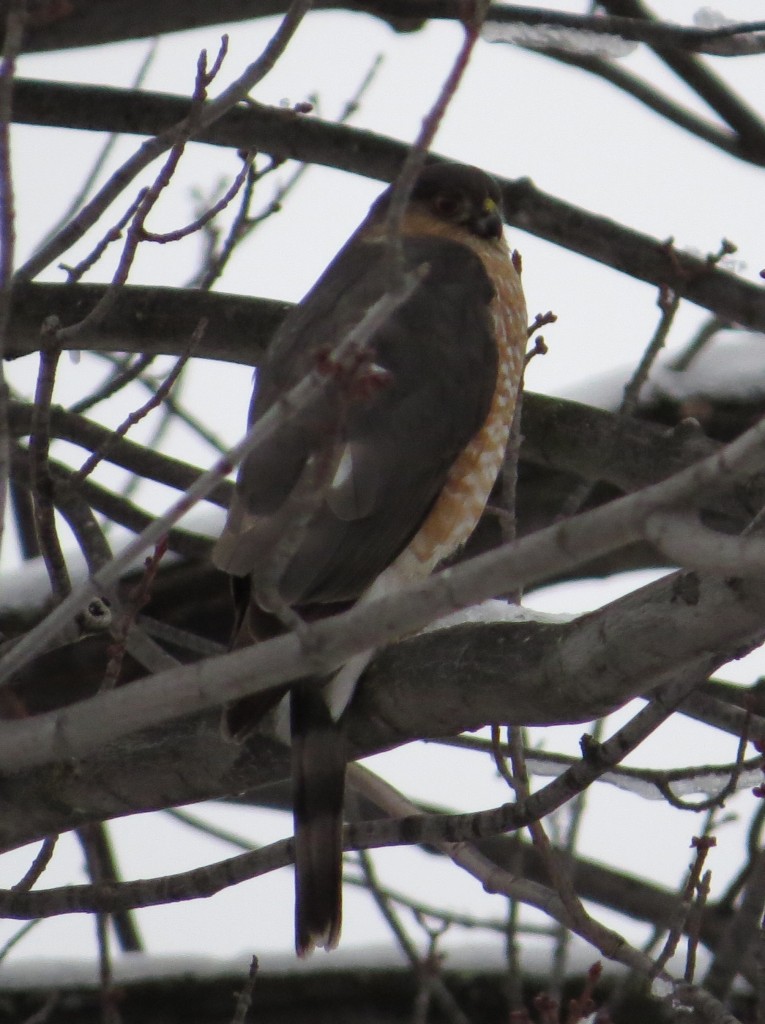