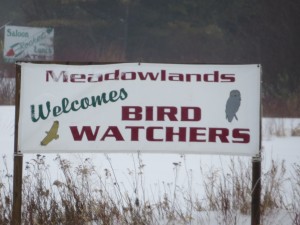 After Evan had gone to bed on Friday night, I went to work on figuring out how to post a message to the Minnesota Ornithologists’ Union’s listserve, better known as MOU-Net.  I put out a plea to other birders in the Sax-Zim Bog to text or call us with any owl locations that day.  I was trying to increase our probability of finding one of these elusive birds.

The Team was up early Saturday morning to be able to get out to the Sax-Zim Bog at daylight.  The weather was not ideal as it was snowing quite heavily.  Unlike the prairie where we live, there was no accompanying wind, so visibility was fine for driving and the roads were just a little snow covered.  It didn’t take that long to get down to the Bog, but Evan kept asking, “Are we in the Bog yet?”  Finally, after several more miles and about ten more occurrences of that same question, we arrived at the Bog.  Everyone was alert and looking for birds even though we were fighting reduced visibility and a bum windshield wiper.  I think we were a little too over-anxious because my dad stopped the truck and said we had a hawk or an owl perched atop a dead tree.  I zoomed in with the camera and saw that our “owl” was just a chunk of the tree trunk that was connected to the lower trunk by a thin sliver of wood.  I took the picture and discarded it, but now I wish I would have kept it because a theme of false sightings started to occur… 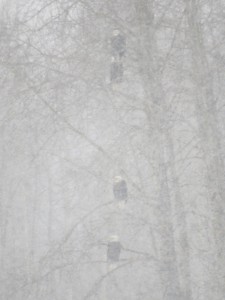 We drove and drove and were not seeing any bird activity.  We had gone past the Admiral Road feeders and didn’t see a bird.  We drove around where Boreal Owls, Northern Hawk Owls, and Black-billed Magpies had been seen.  Eventually we were back on Co. Rd. 7 where we saw the eagles the previous night, and many of them, along with a bunch of American Crows and Common Ravens, were still there.  I couldn’t resist taking this picture even though it was snowing so hard.  We joked about the  pooping order of these birds throughout the day.  At least Evan got to hear these eagles as we had the windows rolled down while they were flying around and chattering the whole time.

After this we had gone down a road that was marked on our map as being a good location for Great Gray Owls.  We were optimistic.  But with every mile under our seats, the optimism started to fade.  We weren’t seeing any bird activity.  Evan was tired from traveling the day before and waking up early on this day.  He tried napping on the bench seat of my dad’s crew cab truck, but he just kept asking when it would be time to go back to Grandma’s house.  Oh boy.  We had come all this way and were only 45 minutes in, and the chief birder was ready to call it quits.  At just the right time, I spotted a Ruffed Grouse eating buds in the top of an aspen tree.  Perfect!  This perked Evan right up, and our little birder was back.  We talked about it and concluded that Evan had never seen a live grouse; he’s seen me come home with several dead ones over the years from hunting outings.  This was the first time my dad and I had ever witnessed one “budding.”  Ruffed Grouse are typically found on the ground.  It was a real treat for me to be able to watch this bird and its behavior.  Most of the times I see grouse, I am trying to squeeze the trigger… 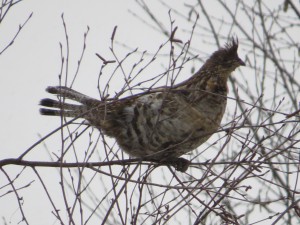 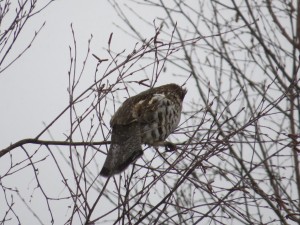 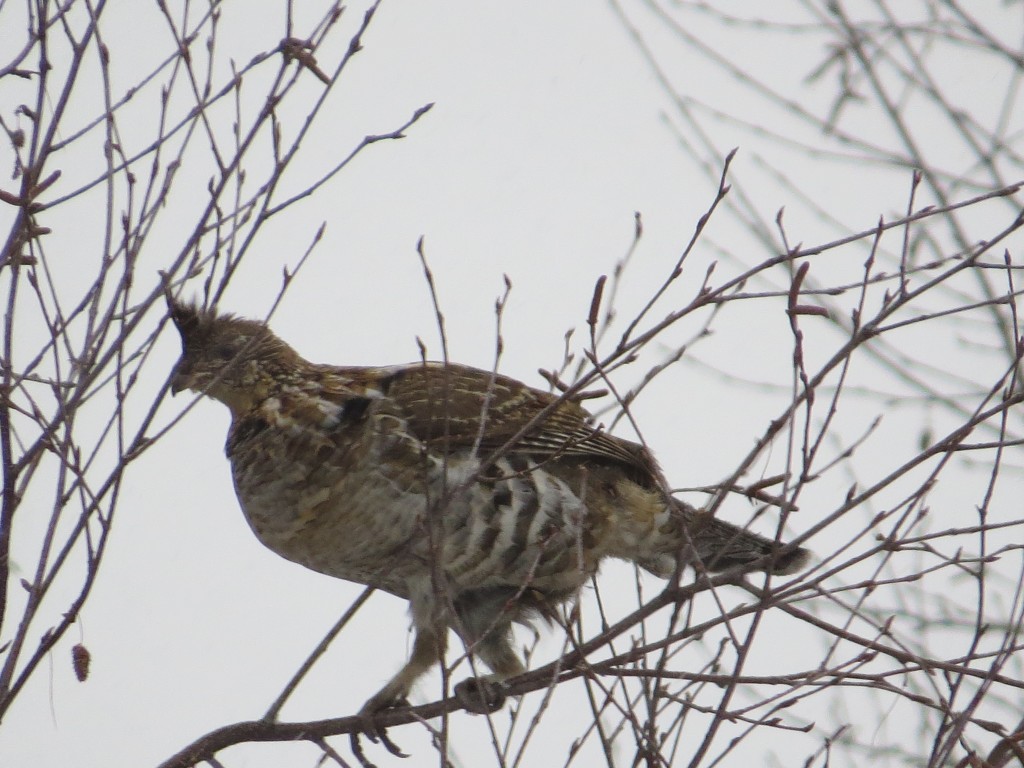 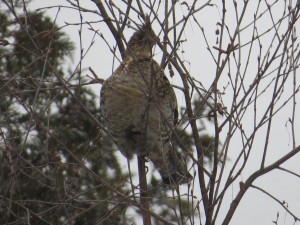 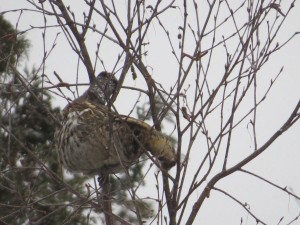 Look at him crane his neck in the last picture to get a bud!

It dawned on me that part of Evan’s misery was being cooped up in the backseat with a limited view, so I invited him to sit in the front middle seat as we went down these lonely backwoods roads.  I think this kid’s day was made just from wearing no seat belt and peeing on the road.  What more do you need when you’re 6? 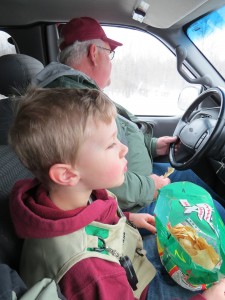 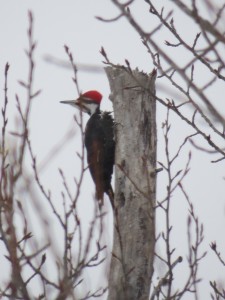 As we traveled on I caught sight of a Pileated Woodpecker fly across the road.  I have seen a lot of these across the state as I’ve started  to pay attention to birds.  We even had our first Pileated in the yard this year. They are huge – about as long as the Ruffed Grouse.  If you see one, you won’t forget it.  Down south they are sometimes referred to as God birds because many people see one and exclaim, “Great God!” The one pictured here is a male as indicated by his red “mustache.” 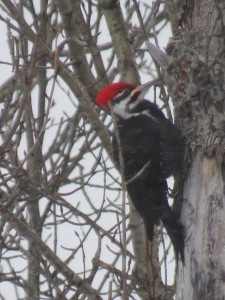 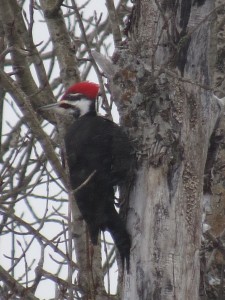 I was in the midst of trying to film a video of this woodpecker when my phone rang!  Every “knock-knock” sound of an incoming email or text got hearts racing and me scrambling for the phone with an excited, “What is it?!” from my companions.  Every time we hoped for a sighting in the Bog, but it was usually just spam or other unrelated MOU-Net posts.  This call, however, was from Steve, a fellow Knowledge Bowl coach back home.  It turns out he saw my message on MOU-Net.  Not only did we discover that we were both into birding because of my posting, but also that Steve was in the Bog just a week ago.  He gave me tips on where they found the Boreal and Northern Hawk Owls as well as Snowy Owls in Duluth.  Another one of his tips led us to one of the many bird-feeding stations in the Bog to check for Black-billed Magpies, a western bird that strays to the Bog – a potential lifer for us. 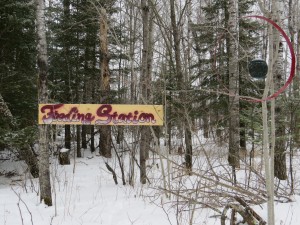 We pulled up to the Kelsey Feeding Station on Kelsey Whiteface Road and happened upon the caretaker of the feeders filling them up for the day.  This caretaker,Loretta, owns the land on which this feeding station is located.  She told us there were some deer at the end of the path who were eating at her feeders.  Evan wanted to check it out.  It felt good to break up all the driving by walking down this path. 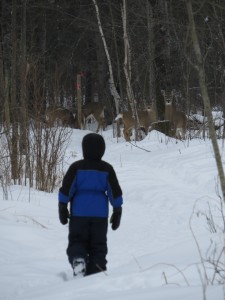 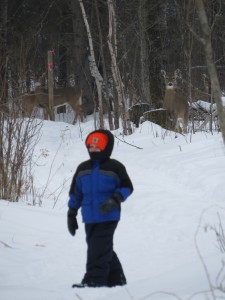 This feeding station is one path in the woods about a hundred yards long with all kinds of fun, unique feeders lining the path.  It almost felt like being in a bird-feeding, art gallery. Check out the first “feeder” – did I mention it was unique? 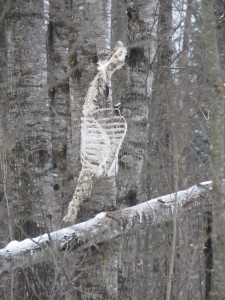 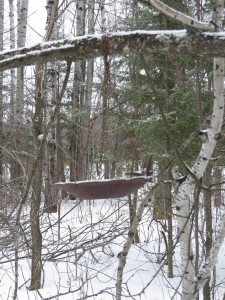 Mark and Loretta began this feeding station just over a year ago.  As locals they were accustomed to all the birds in the area.  They didn’t realize how special these birds were until they started noticing all the people coming through.  Loretta told us how it was not uncommon to be following a car down Co. Rd. 7 at highway speeds only to have the car slam on the brakes and come to a sudden stop on the highway.  All four doors would fly open, the trunk would be popped, and out would come all these cameras as long as a person’s arm.  Occurrences like this got them to take notice of the birds in their own backyard.  Now Loretta is going through hundreds of pounds of bird feed.  There are donation boxes at her station to help keep this a good birding stop.  After watching some Common Redpolls and Pine Grosbeaks high in the trees, we moved on.  No magpies today.

We drove around some more but nothing really significant popped out.  The lack of birds caused me to see the tremendous beauty of the bog.  It is not beautiful as most people know northern Minnesota’s beauty with pristine lakes, rock faces, and towering pines.  Instead, there is a different, quieter beauty here. 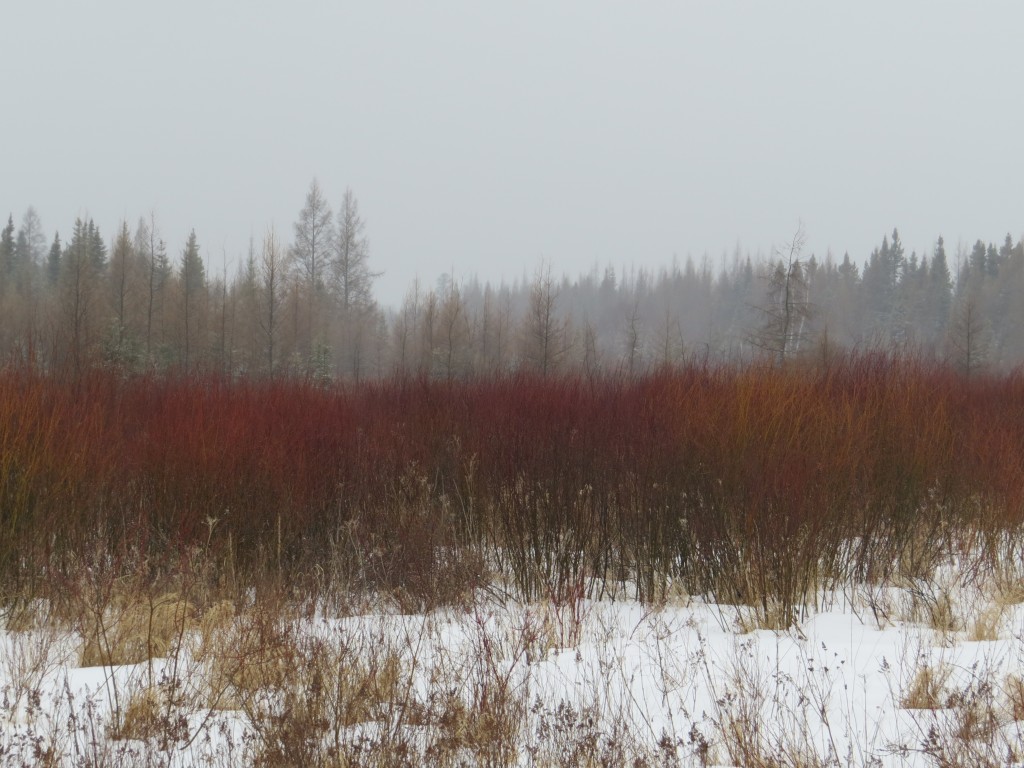 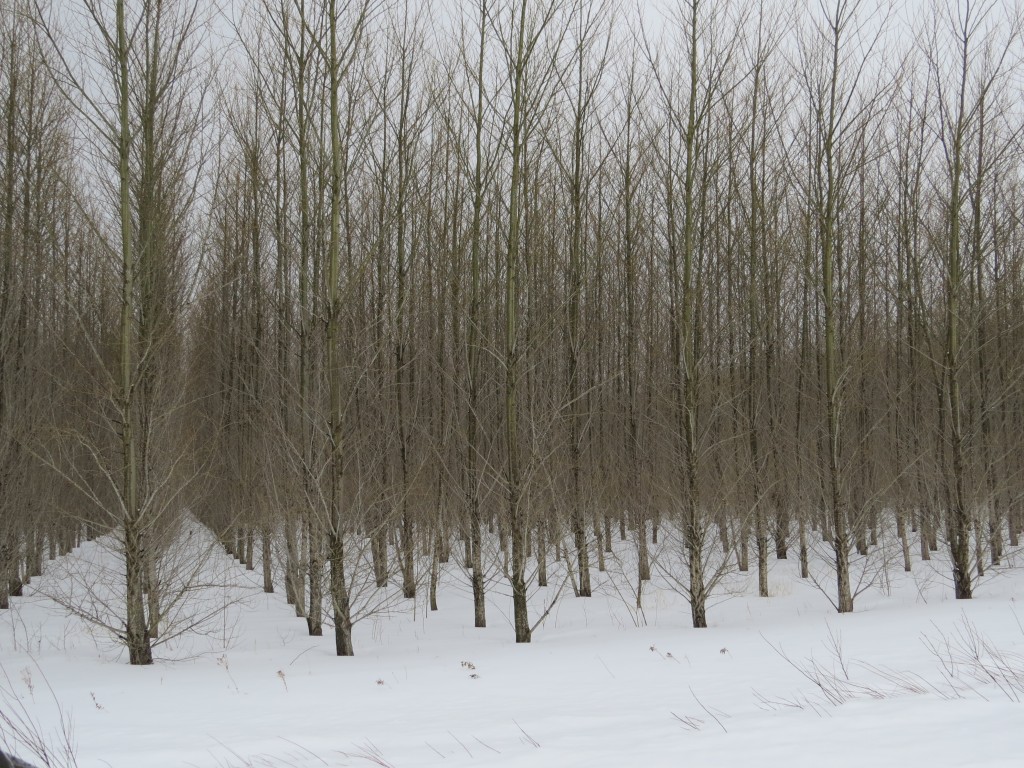 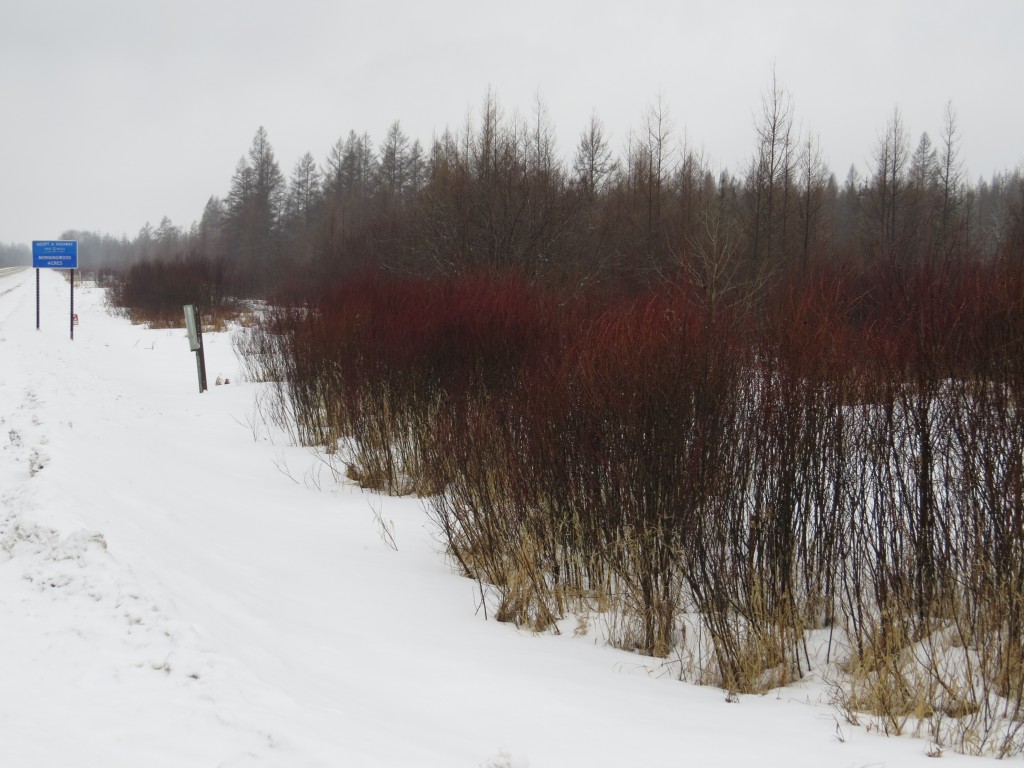 We continued our chase for birds and saw this little bunch.  They were just European Starlings, which we see by the thousands at home.  However, their positioning in these branches reminded me of the structure of DNA and how the lives of birds and birders are intertwined in this magical land. 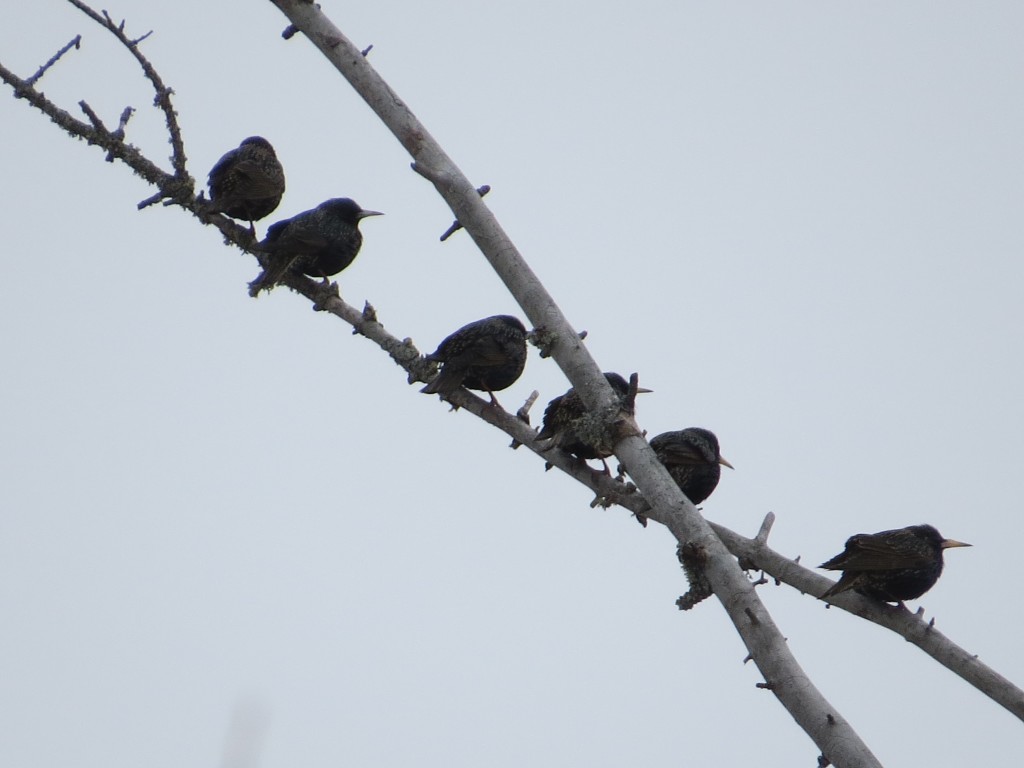 I found the landscape of the bog fascinating.  There were open hayfields throughout.  No wonder the town nearby was called Meadowlands.  As we went by some of these farm landscapes, I think we were getting delirious and desperate for a good bird sighting.  Finally!  A Snowy Owl….oh wait, it’s a rock. 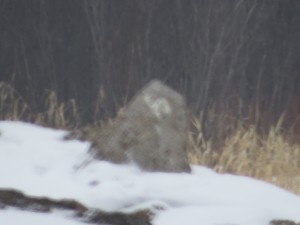 We drove on.  It was time to go.  The rest of my family was going to pick us up in Cotton to bring us down to Duluth for our little family mini-vacation. 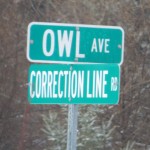 There was one last ray of hope of seeing an owl.  We were going to exit the Bog on Arkola Road and go by the spot where the last Boreal Owl had been seen a week ago.  We got closer to the road and realized that there would have to be other Bog trips to get our owls.  Oh well, at least it’s close to our families.  Plus, we got to see this guy on our way out. 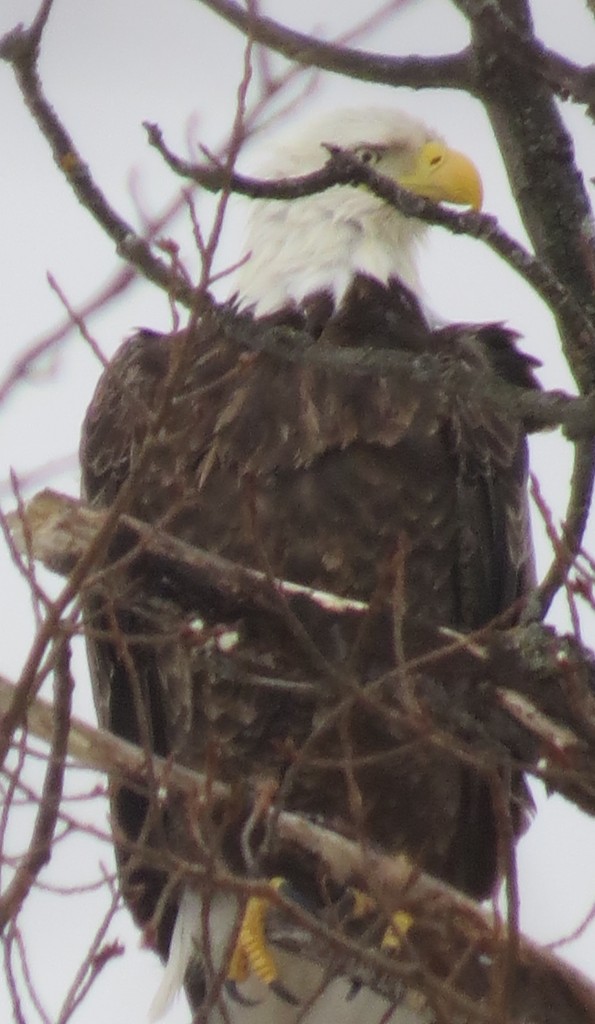