After yesterday’s hawk encounter, I got the bug to go birding for hawks this morning and I was secretly hoping to find a Snowy Owl. Plus I needed something to do with the kids to break up the day since Mom is at musical practice until later this afternoon.  Our first stop of the morning was Thompson’s Bakery in Atwater for the world’s best donuts.  The kids have to have sprinkles, but I got to the bakery too late (8:00 AM) and they were out.  So I grabbed us a mess of glazed donuts.  Sure enough, Evan balked, “What? You just bought me a bread donut?”  I told him they were my favorites and to just try it.  Grudgingly he put it to his lips, and then he couldn’t deny the deliciousness as his scowl turned to a grin and then laughter.  Not a crumb was wasted by either kid, and I ended up sharing my second donut. 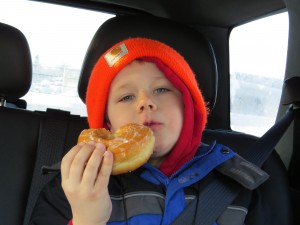 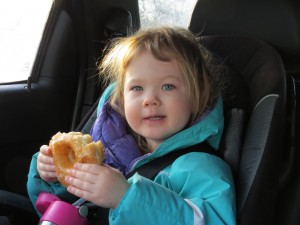 Marin was excited for donuts and “bird hunting.”  About two minutes after her donut was consumed, however, she said, “I want to go home.”  There certainly wasn’t much birding action, and it was dull except for the scenery.  It was a beautiful, sunny morning with fresh, sparkling snow but nothing crossed our path as we traversed the barren landscapes.  On our zig-zag route home, I decided to swing by one of my favorite public hunting areas.  Boy, am I glad I did.  Right away we saw a rooster pheasant and before long we found a group of 5 roosters in a corn food plot.  They were spooked easily, but I got one decent shot of this one on the run to show you.  Look at those spurs! 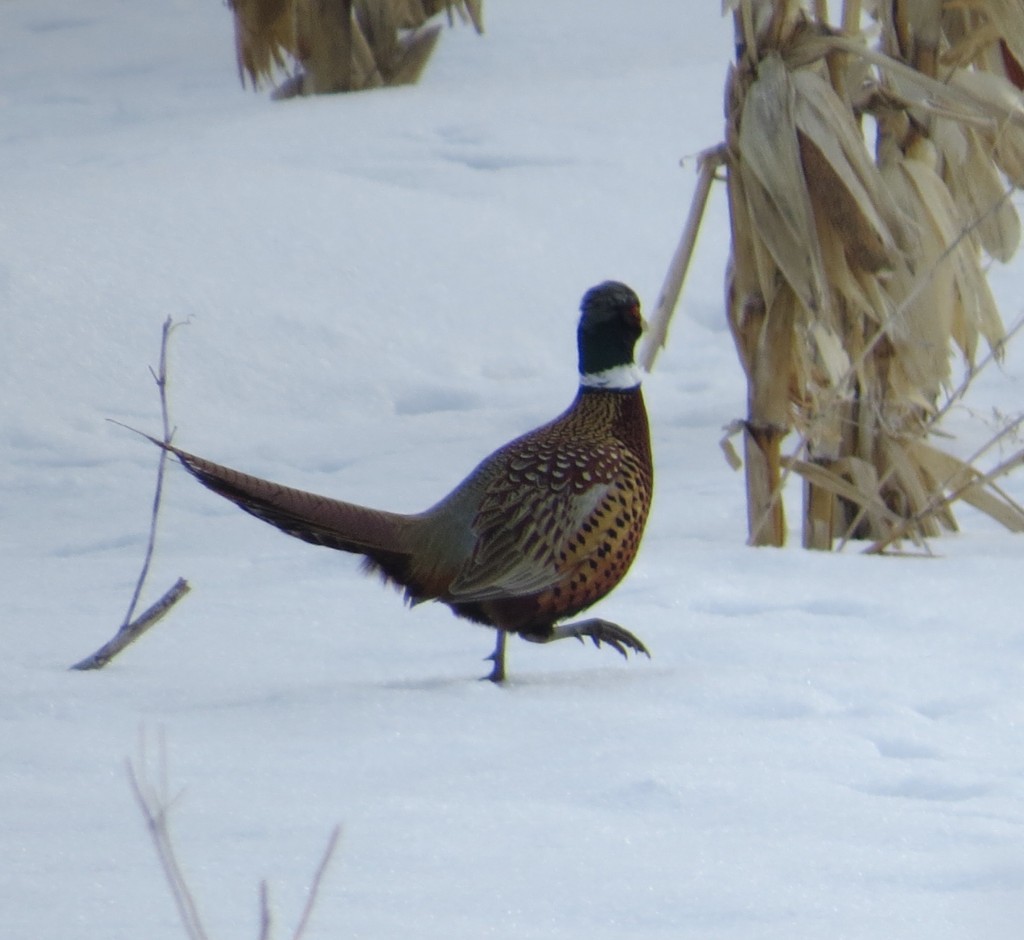 Then I drove by a Waterfowl Production Area, and we hit the hawk jackpot.  First we found one Red-tailed Hawk high in a tree.  This bird was way out there (over 200 yards).  With that 200x digital zoom, I was able to reach out and get him. 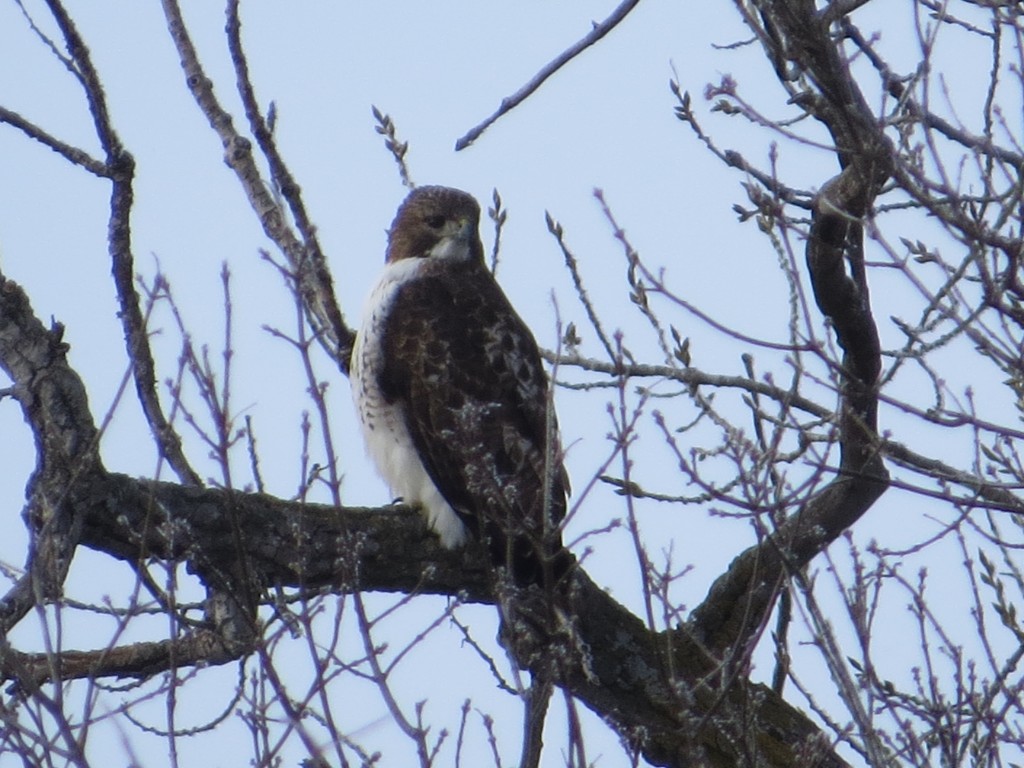 As I was taking photos, Evan was screaming that there was another one in the tree right in front of us.  It flew away, but then flew back.  Look at its beak – building a nest, perhaps? 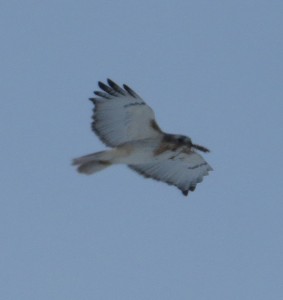 Then, this soaring bird landed right with the first one!  What a scene it was!  Of course, we were a scene too with our whooping and hollering and opening windows and climbing out of the car in 12 degree weather.  As you can see, they each took turns looking at us. 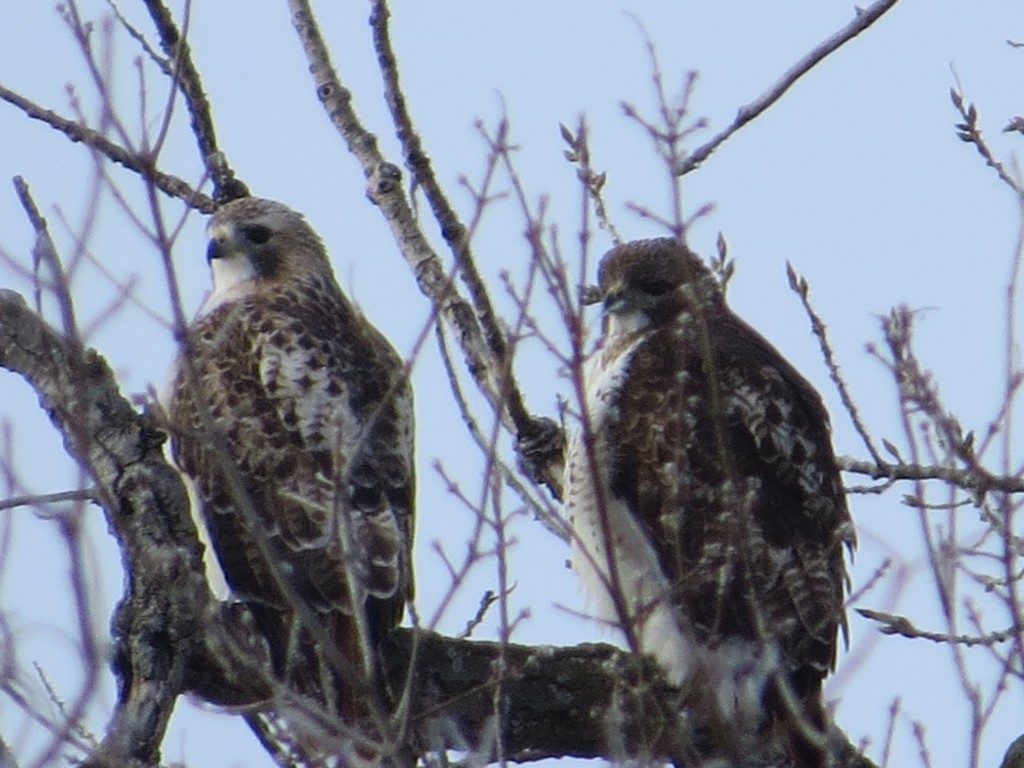 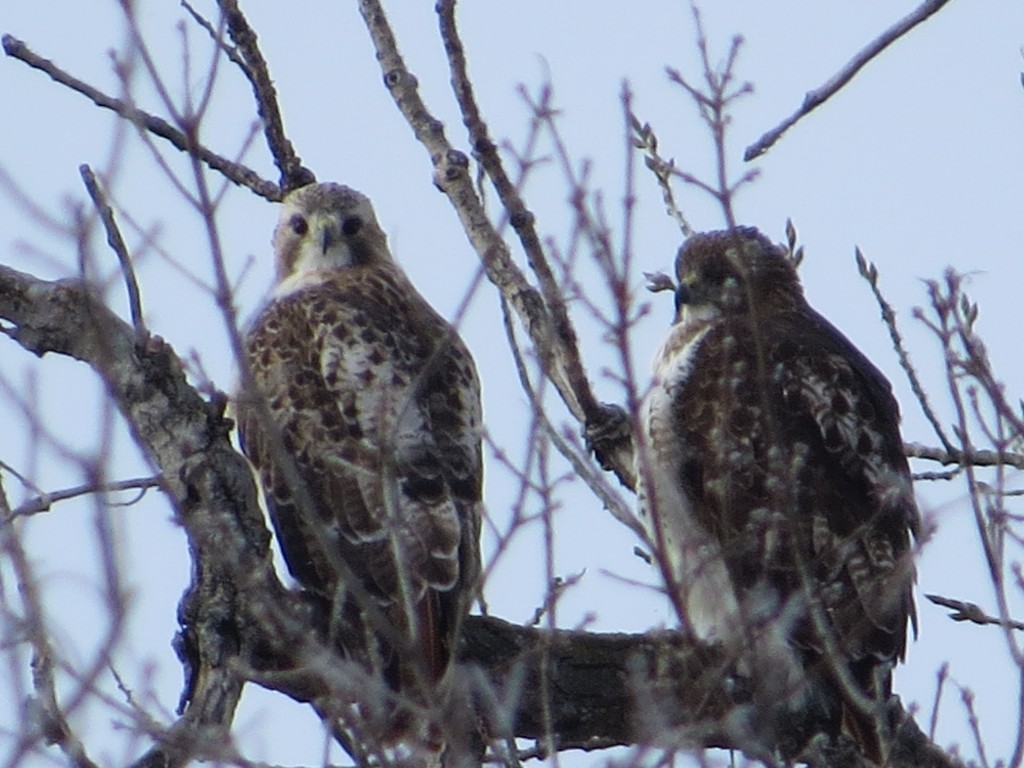 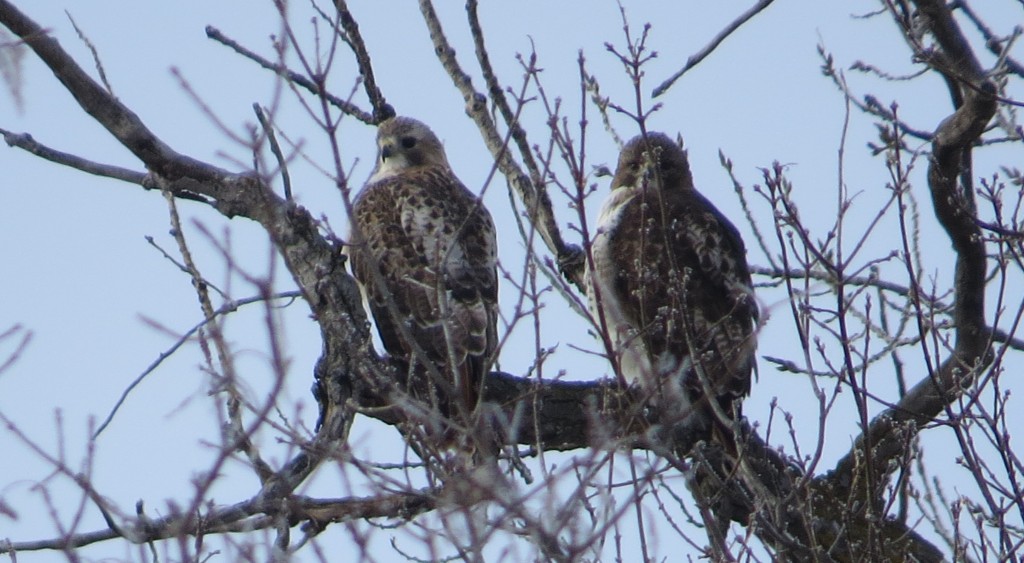 I actually saw these two hawks begin mating, but they quit soon.  I suppose they didn’t want an audience.  I wasn’t ready for the birds and bees discussion, so I kept this information to myself.  You can see the beautiful red tail below. 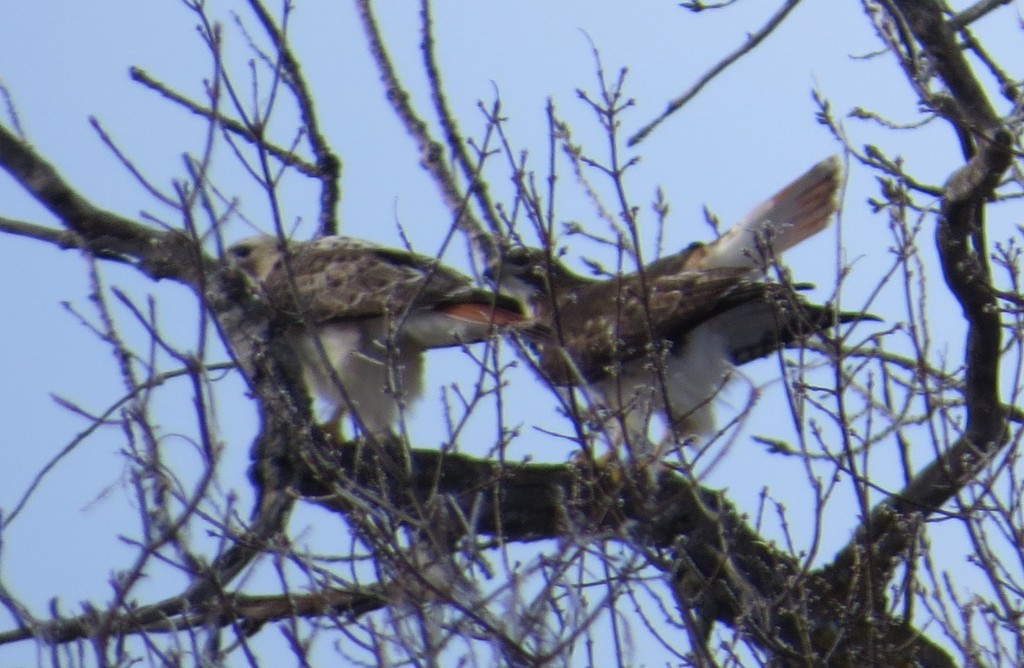 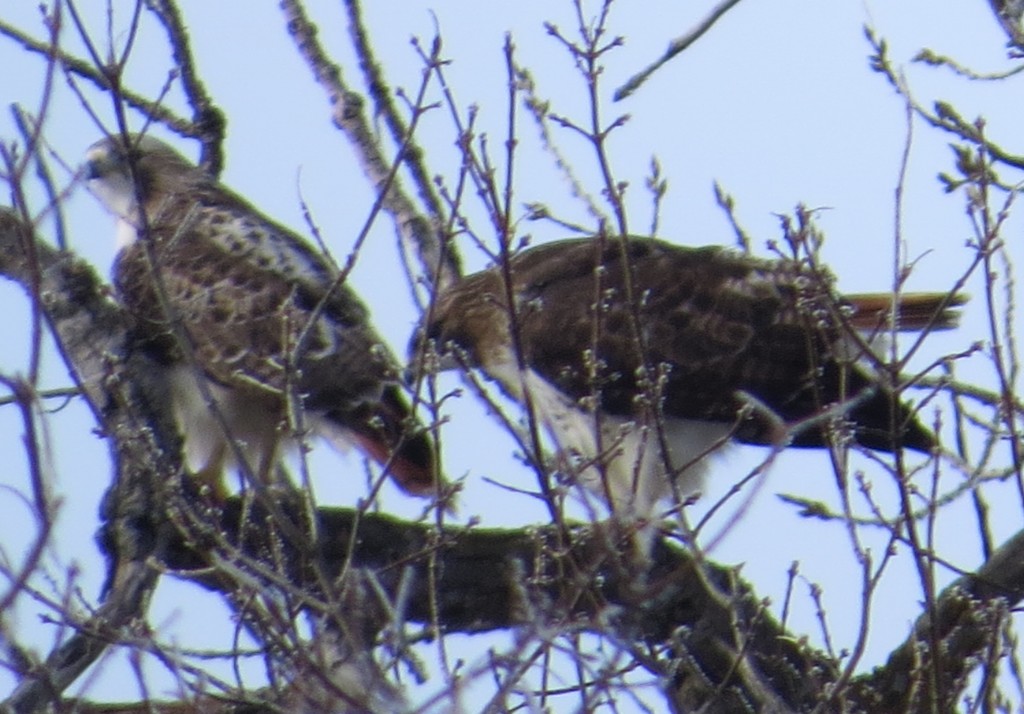 So, how do you top a rush like this?  You finish with a life bird – the Horned Lark!  These little guys were shy and spooked easily.  I couldn’t get within a tenth of a mile, so my photos are blurred.  But thanks to this camera, which doubles as my binoculars, we could make a positive ID. 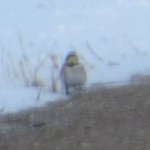 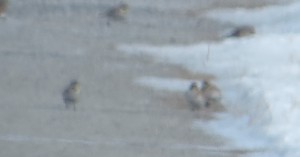 What a day it was!  It is so satisfying to get our target bird of the morning, and a unique shot of two made it all the better.  Then to cap it off with a lifer made for a thrilling morning!