And the birders.  Today was a beautiful winter day in Minnesota with a light snow falling, making everything quiet and white outside.  Our day started with going to the early church service so that we could come home, grab a bite to eat, and then head to Hutchinson to see their Middle School’s production of The Little Mermaid.  We went to see it because Melissa is directing the exact same musical in less than a month for Willmar Middle School, and my cousin’s wife is the director of Hutchinson’s show. Anyhow, when we got home after church and before we headed south, we sat down to eat lunch. I had just got done scolding the kids for leaving the table before they were finished eating, when I spied Mr. Northern Cardinal at the backyard feeder.  Now I had that brand new camera and an awesome bird to photograph, so I, too, left the table before I was finished.  So I won’t be winning any Father-of-the-Year awards, but I got some great shots! 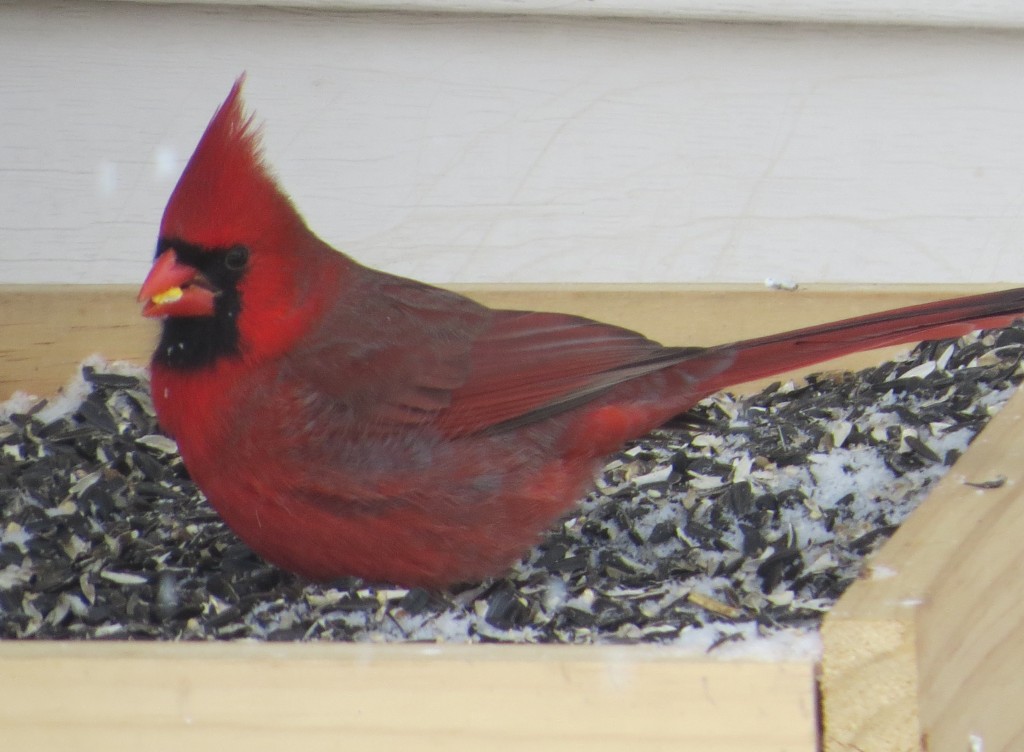 Here he’s enjoying one of the few pieces of cracked corn in the feeder. 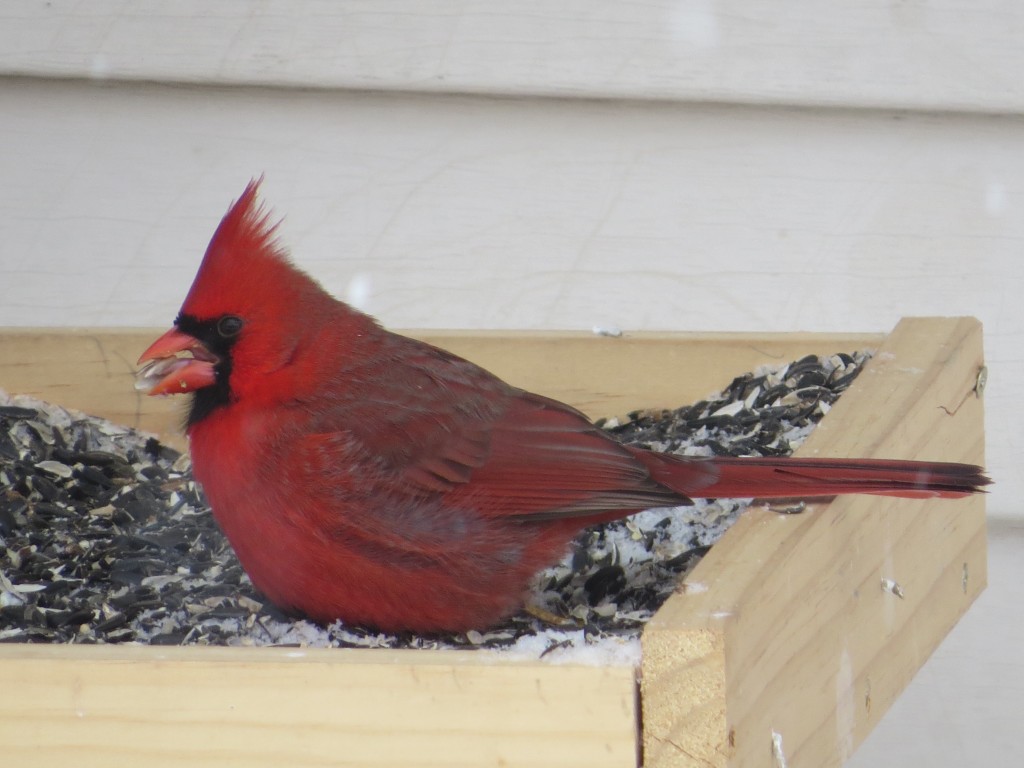 Check out the picture above.  Not only can you see him crack the sunflower seed, but you can see him nabbing the sunflower heart with his tongue! 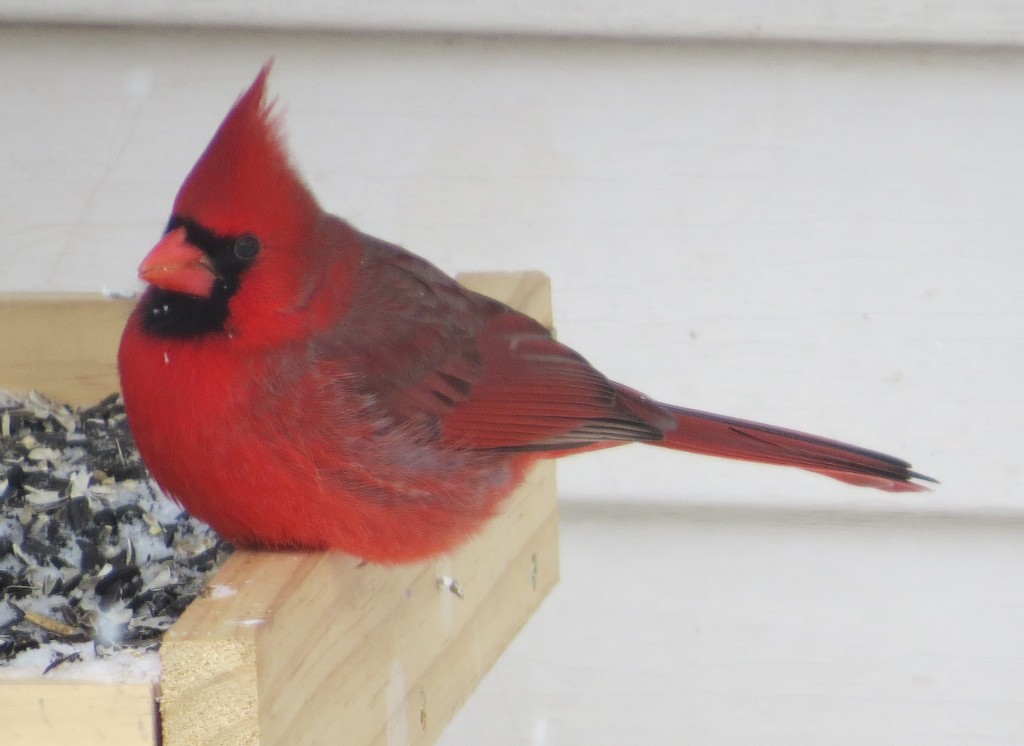 Resting.  Look at all that red! 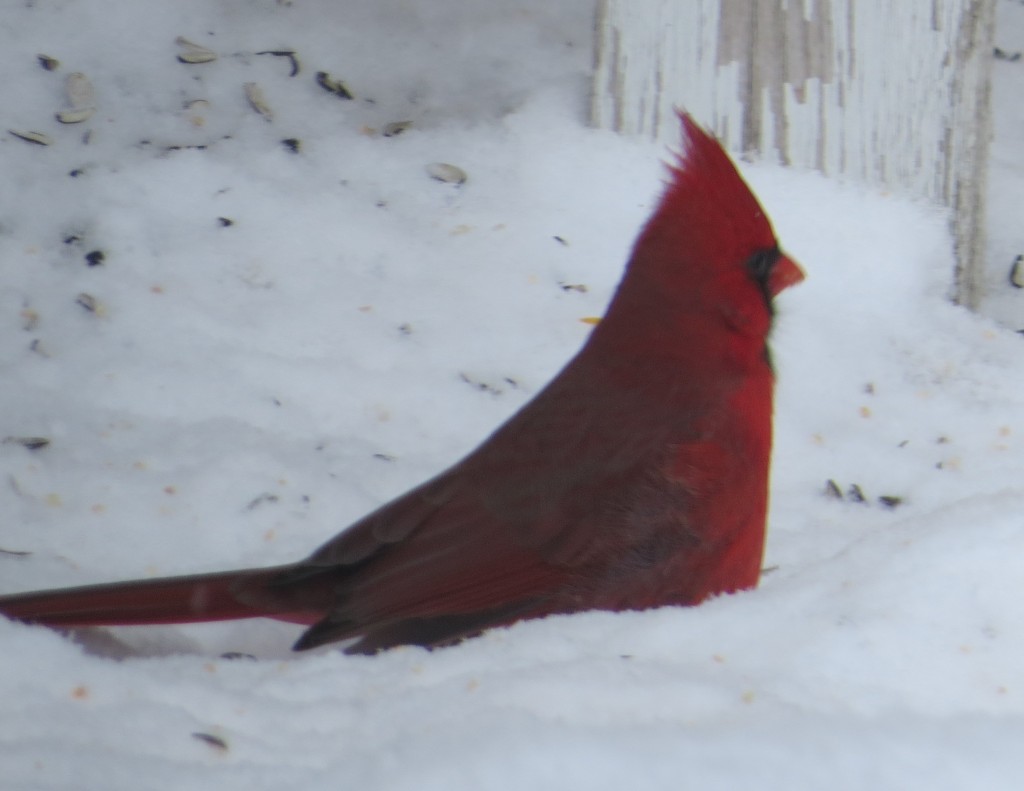 Prowling.  Until I got this camera, I had no idea how dark a cardinal’s back was.  The gradient of red is amazing.

So after this spontaneous photo-shoot, I finished my lunch and we were off to Hutchinson.  Since I go to work in the dark and get home really late in the evening, our birding opportunities are limited to the weekends.  I threw the camera in the car “just in case.”  After all, we were traveling 45 miles.  You never known what you are going to see.  Just over a mile down the road, we found 10 Ring-Necked Pheasants right in the ditch.  Oh, how I wanted to get a shot of them, but I couldn’t risk being late to the musical.

We thoroughly enjoyed the performance of Hutchinson’s students, and it was nice to visit for a bit with my cousin, Brett, and his family.  But they had a set to tear down, and we had to head home.  With plenty of daylight left for the return trip, I was excited for the possibilities.  In less than 15 minutes, here is the first major bird we saw.  This wild turkey was much closer to the road before I gave my family whiplash turning the vehicle around.  As I monkeyed with the vehicle and camera, he was disappearing deep into cover. However, with that camera I was able to reach out and touch him.  This tom is smart and ready for the spring turkey hunt – he kept his head out of view.  Look at the beard on this guy! 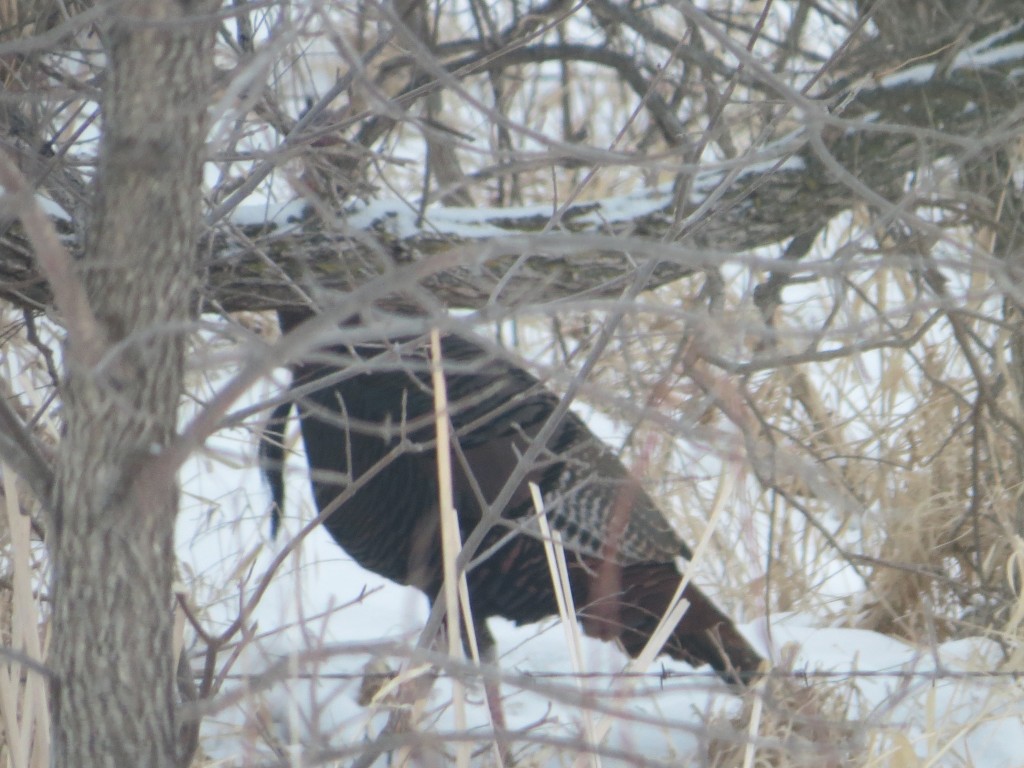 We got on our way, and I was excited to get back to a spot on the road where we had flushed a flock of Snow Buntings on the trip down.  Sure enough they were there.  Snow Buntings visit us in the winter only and prefer open fields and roads.  If you’ve traveled any country road in west-central Minnesota, then I’m sure you’ve seen large flocks of these white, tan, and black birds flush from the shoulder and swirl about in the air until they eventually land again.  These poor Snow Buntings were on a busy road and would get flushed by a car, fly about, land in the same spot, only to have a car come 5 seconds later.  This happened over and over.  I got a few shots, but I did not have much time so they are a bit blurry – you have to hold that camera super still when it is zoomed out so far.  I was excited to see these images because I’ve never seen these birds up close except for in field guides. 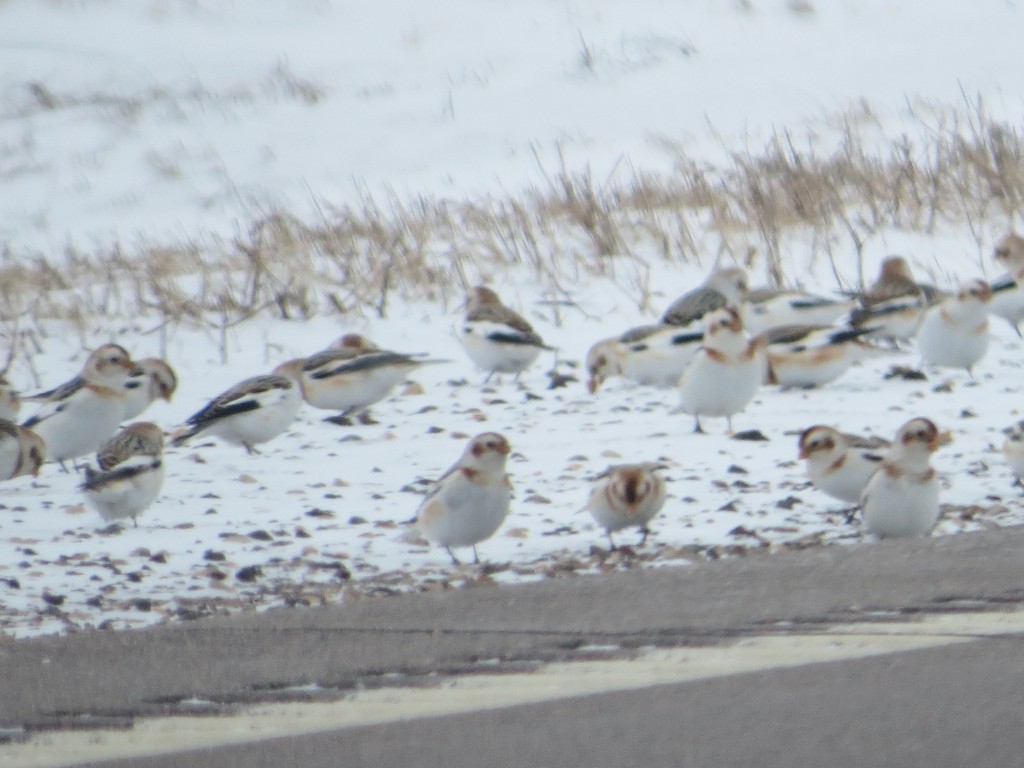 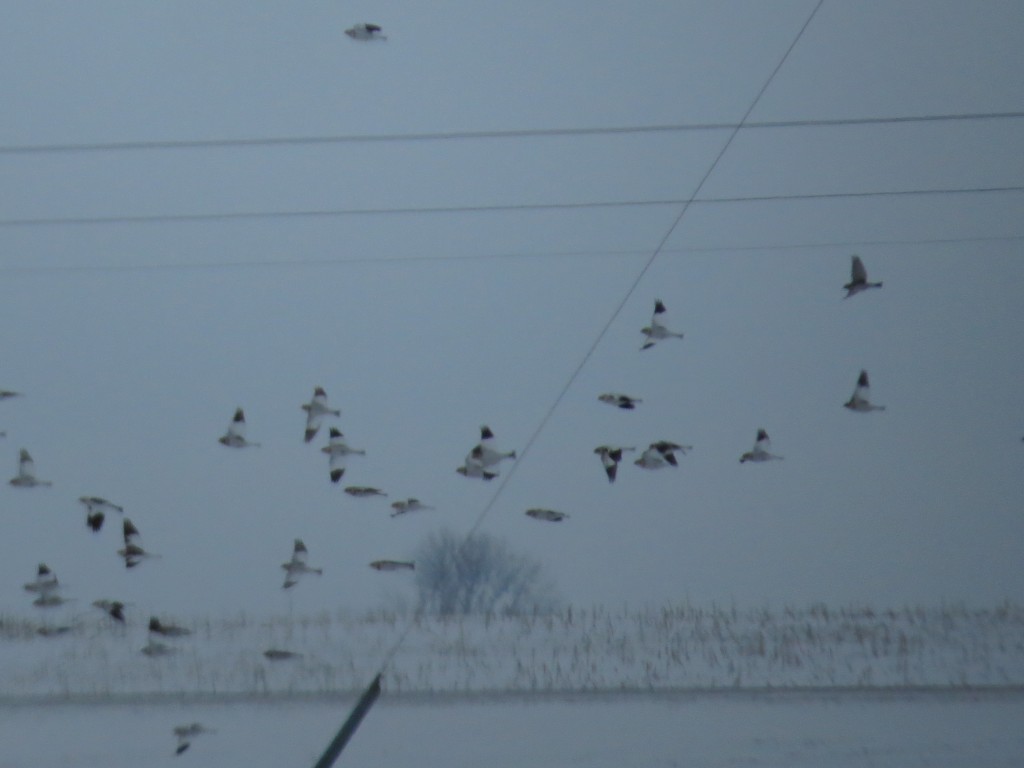 Even my wife was amazed by these little guys and asked if there is a flight leader that directs their fast and furious cloud one way or the other.  I don’t think she minded this birding stop.  It helped that I didn’t pull any Gs and was able to bring the vehicle to a comfortable stop.

As we continued our journey home, we would have one more bird encounter.  I spotted a Bald Eagle flying high from left to right.  Again, I screeched to the shoulder and slammed on my brakes.  As my assistant – my wife – fumbled to get me the camera and get the sunroof open (Yes, it was only 15 degrees) so I could take the shot as it went to the right and after I got the camera on the sports setting and zoomed out, he was almost gone.  I got a couple of parting shots.  They were blurry, but I think you’ll recognize this bird. 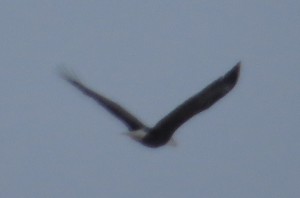 What an eventful “birding” trip!  You have to take what you can get in Minnesota in the winter, and considering the limited time we have to bird, this was an excellent outing.  I think my wife might have even thought so….I caught her viewing the photos on the camera before she’d put it in the case for me.

6 thoughts on “Sundays are for the Birds”