While the intent of this blog is to share and record the joint birding experiences of myself and Evan (and my dad too), I think I would be doing you readers (and Evan) a disservice if I did not document how I became a birder.  This will be my first and last post that details just my experiences.  After all, reading about Evan is what keeps many of you coming back.  As I described in the About page, this pasttime originated with Evan and was encouraged by my wife and me, but I was never personally invested until I had an encounter with a special bird one day last June.  That chance meeting hooked me into this sport, and now I’m “all in” and share the joy of birding with Evan.

So how could a bird possibly flip the switch for me?  How could passion for a new hobby just ignite?  Before I tell you, it is important for you to know something about my love of the outdoors and how that love has evolved over time.  I’ve always enjoyed nature, whether that was growing up on a 10,000 acre lake in northeastern Minnesota, paddling a canoe through the Boundary Waters Canoe Area Wilderness, or traversing  the hills and sage-brush country of eastern Montana in search of wild game.  Growing up, our family did a lot of camping and hiking, and as I got older, my spirit for adventure grew as I found myself becoming an avid fisherman and hunter. Like many young boys who hunt, I liked to hunt anything with eyeballs at first.  Eventually, though, my interests became honed.  I just didn’t find excitement in pursuing deer and small game.  But wingshooting fascinated me.  I enjoyed the challenge of finding game birds and feeling the tremendous excitement of the fury of beating wings explode in front of me.  I loved canoeing silently around bends in shallow rivers hoping for an eruption of any number of different kinds of puddle ducks. Then to have the skill to hit such a fast, unexpected target and to share the comraderie and teamwork of a good bird dog made this the perfect sport.  Game birds and ducks fascinated me. I was never a numbers guy trying to fill my limit with anything that flew; rather I wanted to seek out and shoot the fascinating ones – a rooster pheasant, a drake wood duck, or a drake green-winged teal.  I even did my own bird taxidermy, mounting well over a dozen birds.  That got old, and as I aged my lust for game went away.  I still liked to hunt, but my interests shifted. Not being able to stand the taste of duck meat, I gave up that hunting.  To hunt something you do not use as sustenance is just wrong.  These days my limited outings of wingshooting just involve ring-necked pheasants and ruffed grouse – birds that taste so chicken-like that even my wife will eat them.  Maybe.  So a couple birds all season is enough to satisfy my urge to hunt and more than enough to satisfy my craving for game meat.

But this is not a hunting blog, and I hope I haven’t chased away all my birder friends with my back story. After all, I’m just getting to the good part – a magical encounter with a special bird.  So, one day last summer while staying at my dad’s 80-acre farm in northern Minnesota, I was exercising my two yellow labs, Faith and Chance, by driving around on the four-wheeler and having them chase me.  What can I say? I’m lazy.  As I was maneuvering the four-wheeler through a gravel pit that was surrounded by 10-15 year-old aspen trees, I heard a vibrant, cheery bird call over the revved engine of the four-wheeler.  What in the world was that?  I shut off the machine and listened.  I heard it again, and it was close.  Now I had to see what was making that fantastic song.  I didn’t have to wait long because this is what I saw: 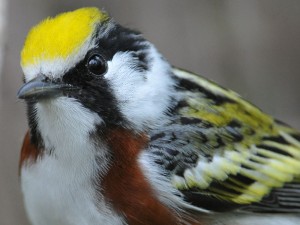 It was gorgeous.  Throughout my life I’ve seen a lot of pretty birds at feeders and have become quite jaded to them, but this, this was new to me!  I couldn’t believe such a bird existed in the region I had been raised, and yet I’d never seen it.  I raced back to the house to find my dad’s tattered bird identification book from the 1960s.  The bird was unmistakable in appearance and easy to ID. It was the Chestnut-Sided Warbler. So cool.  The call of the Chestnut-Sided Warbler is often quoted in bird books as sounding like, “Pleased to, pleased to meetchya!”  What an appropriate greeting to someone just discovering the world of birds.

Even our sportsman, nature-loving President Teddy Roosevelt was captivated by this pleasant, little bird.  His sister, Corine Roosevelt Robinson, documented the following outburst of her brother, “One winter morning the President electrified his nervous Cabinet by bursting into a meeting with, ‘Gentlemen, do you know what has happened this morning?’ They waited with bated breath as he announced, ‘Just now I saw a Chestnut-sided Warbler and this is only February.’ ” I totally get it, TR.  Have a look/listen for yourself by watching the short video below.

This video was shot by Lang Elliott who runs the website The Music of Nature. Lang has been kind enough to let me put this video on my post. Thanks, Lang! Check out the website if you get a chance. It will be worth your time.

Immediately after my encounter with this warbler, the bird hunter in me was hooked.  Hunting now meant something different to me, and hunting was no longer bound by state lines or dates on a calendar nor did it require a gun.  This new hunting, better known as birding, also required an acute attention-to-detail, a skill I have valued and refined in my career as a math teacher. So there I was, a brand-new birder, thumbing through the bird guide, and I discovered that there’s a whole fleet of warblers – each more beautiful than the last!  Then I noticed that a great number of them summer or migrate through northern Minnesota.  My excitement for the sport was growing by the minute.  My dad, a former wildlife biologist, has always enjoyed bids, and my son has been a bird aficionado for quite some time.  Now, I, too, had got caught up in the excitement.  In less than 24 hours from being warmly greeted by the feathery little creature, my dad and I were up early the next morning to go birding on his property.  And these are the beauties that we found that morning.  Absolutely stunning.  I had no idea what lurked in the trees and bushes around me. 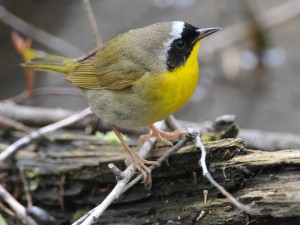 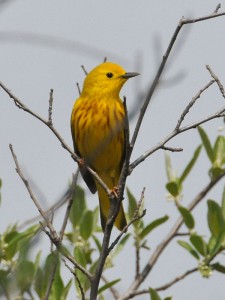 I’m sure that I will continue to chase up grouse and pheasants with my labs in the coming years.  The difference now, however, is that I’ll have a pair of binoculars in my hunting vest.  I have no doubt that the pheasants and grouse will flush unharmed as I am peering through the binoculars trying to ID some bird.  Based on my shooting ability, they’ll be safe regardless.

The photos of the Chestnut-Sided Warbler, the Common Yellowthroat, and the Yellow Warbler are courtesy of Chris Thomas Bird Photography.  Chris has generously given me permission to use these pictures to enhance this post. Thanks, Chris!

If you’re a hunter, check out my previous post titled Rooster!

If you want to read more about an experience with another fantastic warbler, check out the post titled A Glowing Flame in the Treetops.