Almost two weeks ago now, our family made the 265 mile trek to see both my wife’s family and my family who live 8 miles apart on the same gravel road in northern Minnesota.  After the flurry of having Christmas at our own house, packing up, and driving, we arrived Up North late at night on Saturday, the 22nd. The next day started out just as busy as we headed to town in the morning for church and then out to the house of some old family friends for lunch.  Finally we got back to Grandma and Grandpa’s house, and Evan immediately said, “Let’s go birding!”  It was nearly zero outside, but Evan, my dad, and I all donned our outdoor gear and went out for a short walk in the woods.  It wasn’t too cold, and there was less than a half a foot of snow.  It should be a good time, right? 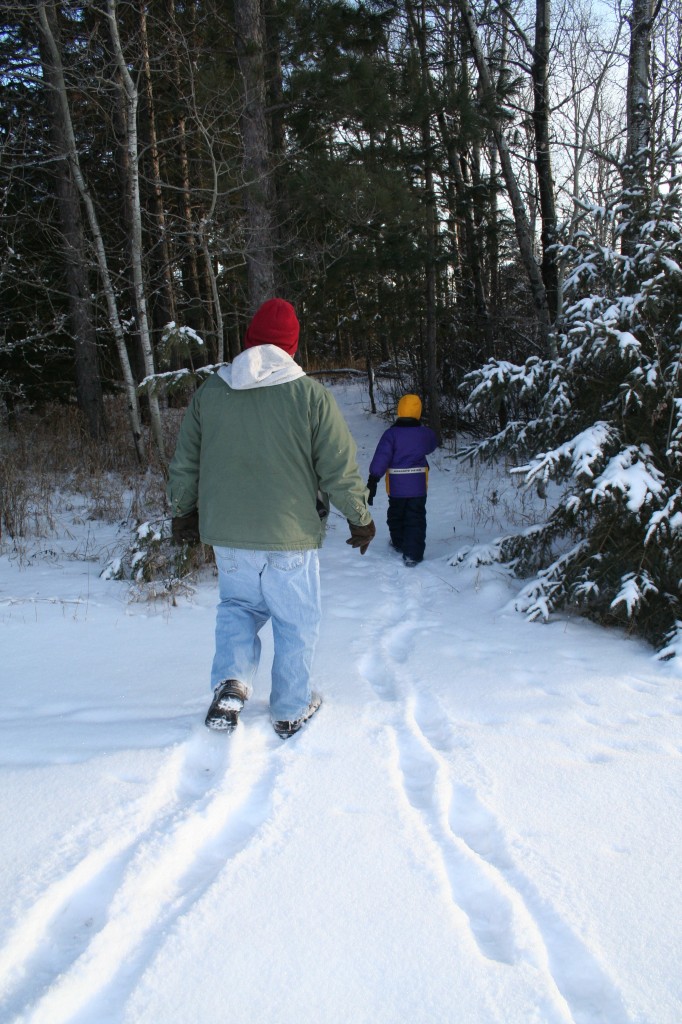 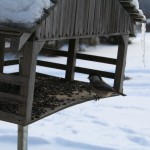 Well, we got into the woods which were eerily absent of life – there weren’t even our favorite friendly Black-Capped Chickadees fluttering about. We had walked about the equivalent of two city blocks when the chaotic pace of traveling and the Christmas season finally caught up to my buddy and caused him to crash.  There he was, knees in the snow and crying,  “I can’t walk any more!”  We were less than a quarter mile from the house and decided to head back.  That is to say, all of us but Evan.  He was still knees in the snow, head down, and pouting with his bottom lip stuck way out (as we say in our house, ‘a bird will poop on that thing.’).  So I had to take off my birding buddy hat and replace it with my Dad hat. In these moments of moodiness, Evan wouldn’t listen or comply with my instruction to keep walking back to the house.  He was not budging from his spot in the snow.  Too heavy to pick up and carry, I had to alternate between pulling him along by gripping his coat and walking ahead and waiting.  It was the birding outing that wasn’t.  Before I could let disappointment slip in, I remembered that he was 5 and that he chose this pasttime.  It was okay if he needed a break today.  After all, he had some new presents to play with and Grandma’s cookies to eat.

Apparently the break continued for awhile. Earlier that day when we were at our friends’ house, we watched their feeders and talked birds.  Our friend, Al, gave us a tip that they had a pair of Gray Jays show up every morning for just an hour or so on the suet feeder.  I’d never seen one, and I knew Evan hadn’t either.  What a great addition it would be to his Life List!  Nearly a week after the birding debacle in the woods and after the chaos of Christmas had settled down, I asked Evan if he wanted to go see those Jays.  Nope.  I asked him a couple more times before our visit Up North was over.  Nothing doing.  Was my little birder gone?  Fortunately I don’t think so.  I think he was just worn out from all of the recent activity of seeing so much family and being away from home for a week.  I know his birding spirit wasn’t completely gone.  On our drive home, I spotted a Bald Eagle perched near the road atop a dead pine tree.  Stunning.  When I told Evan there was an eagle, he shouted, “Where?!”  Nope, he’s not gone.  He just needs a rest and a bird spark.

Maybe you can help us with that spark.  What’s your favorite bird that visits your area?  Evan loves looking up birds on his Audobon Society Bird App on his iPod, and he’s developing a better sense of geography.  Who knows, maybe our travels will land us at your door someday to see your bird.